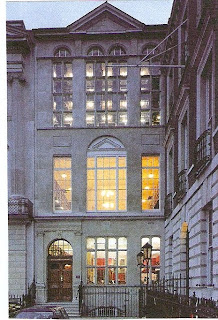 The above quotation comes from the acknowledgements in a book by the highly-acclaimed children’s author, Mary Hoffman. And I have come across many similar tributes in books by other grateful members. Georgette Heyer, for example, was a member and found it invaluable when researching The Spanish Bride and An Infamous Army.

I added my own small tribute in Crossing the Tamar. I wrote: I could not have written this without the resources of the wonderful London Library – where else could I find The Times of 1808 and books on Cornish Mail coaches and a history of cock fighting all under the same roof?

There are over one million books and over 8,500 new books are added annually. Of particular interest to historical novelists, are the literature (and fiction), history, biography, topography and arts sections. Personally, I love the quirky Science and Miscellaneous section, which has everything from smuggling, chocolate and costume to folk lore, cricket and sundials.

What I particularly like is that the library never discards books, so you can find – and borrow - an early 19th century guide to Dieppe, for example, or The Illustrated London News from 1860.

It’s a great place to work, too. There are several rooms to work in, including the original reading room with its deep leather armchairs, but, if you prefer, there are also desks tucked away in various odd corners all over the building. There is an outstanding reference library and free internet access through public terminals and Wi-Fi for laptop users. 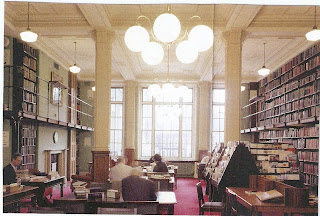 If at home, or out of London, members have free, remote access to a wealth of resources, including JSTOR, the online archive. And the library will post books to members anywhere in the U.K. and Europe for just the cost of postage.

So, what does all this cost? The current annual subscription is £395. A lot, you may think, and, of course, it is. You can, however, pay monthly, which comes to just over £33 per month. Or, to put it another way, it’s a little over £1 a day – the cost of a daily newspaper. I was discussing this with a journalist I met there a week or so ago. She said, ‘An awful lot of other things would have to go first before I’d give up my membership.’

(Pictures courtesy of The London Library)

Email ThisBlogThis!Share to TwitterShare to FacebookShare to Pinterest
Labels: The London Library

I've been round as a guest, Elizabeth. Fascinating place.

Yes, isn't it. When I first joined, it felt like a rabbit warren (though an interesting one)with thousands of books and a vaguely Alice in Wonderland feel about it. The reading room even had a real fire in winter!

Now, with the acquisition of the house behind, it has had a stupendous makeover, including some splendid state of the art rooms to work in.

I joined a group of members on a small tour of the new work a few weeks ago - which triggered this post - and was bowled over.

I'm sneaky. By doing a long-term, part-time degree, I get free access to a great university library and JSTOR and other online resources only available by institution subscription. ;)

My father's been a member of the LL for several decades though. He swears by it as a resource.

I remember enjoying it myself when I was doing my M.A. at Birkbeck. I had access to the Birkbeck and Senate House libraries and the Institute of Historical Research which has wonderful old bound copies of Punch.

All the same, if you are researching anything on the arts side, as I was, the London Library would be invaluable. I could get hold of obscure 19th century publications which the London University libraries and the IHR didn't have - and take them out for weeks!

I agree, Elizabeth - it is a fabulous resource and when you factor in thigns like free acccess to the Times archive on line sub that does help "reduce" the cost. I just get the shivers thinking that I'm researching Regency history in the same place that Heyer did so much work.
They do day tickets at a very reasonable cost if anyone wants to try it out.

Nice post. All very good points. There are a few sites that I’ve registered at in order to comment, but they are few and far between.

I agree with you about the 'Heyer factor', Louise.

The London Library also has some splendid Victorian loos with mahogany seats and original 19th century fittings. I try not to think: George Eliot may have sat here!

Shenitaviolet: I enjoy writing my blogs and do my best to make them interesting and lively. I'm thrilled that it's elicited a rare comment from you. Thank you.

I love the idea of the day ticket - I shall have to investigate! Thank you, Elizabeth for a fascinating post.

Mr Kate Allan is a member. Everything a dream library should be. A wonderful place indeed.