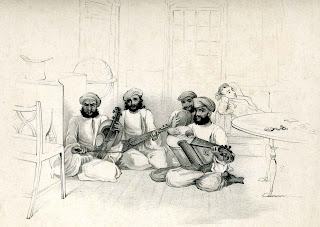 Just now I am researching for a book set entirely in India in the late 18thc and writing a trilogy which begins there in the early 19thc, so the British experience is very much on my mind. A visit to the fabulous recent exhibition at the National Portrait Gallery - The Indian Portrait - gave a fascinating insight into the life, and mind-set, of the earlier British inhabitants, the officers of the East India Company who seem to have thrown themselves whole-heartedly into princely Indian culture.
A portrait of William Fullerton (c1764) shows him reclining on a terrace smoking a huqqa, just like many of the Indian noblemen in the exhibition. Fullerton is wearing his wig and black tricorne hat, his crimson coat and knee breeeches - he must have been sweltering! - but a similar scene depicting John Wombwell in the late 18thc shows him wearing Indian dress and he seems very comfortable sitting cross-legged with his pillows and huqqa.
The picture at the top is from a collection of old prints of India showing the life of these East India Company officials. This one reclines at his ease in a completely European setting - furniture, globe, even his tall hat left on the table. And yet he is listening with drowsy pleasure to a quartet of local musicians.
These earlier Europeans seem to have adapted well to life in India - if they lived long enough. 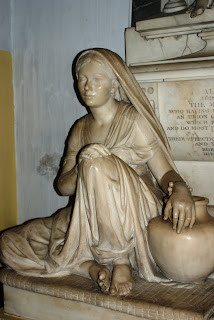 When they succumbed to disease or the heat they even adapted the funery monuments of home to their new life, as this graceful figure on a tomb in St John's Chuch, Kolkata shows. Many took Indian wives, some converted to Islam or Hinduism without causing adverse comment, most seem to have adopted Indian dress for much of the time.
The culture shock must have been extreme but the approach appears to have been one of curiosity and interest as they settled down to trade, sending back the silks and embroideries, the Kashmir shawls, the ivory and gems that adorned the ladies of Georgian Society back home. What did they make of scenes such as this of the Red Fort in Delhi in a cloud of Black Kite? 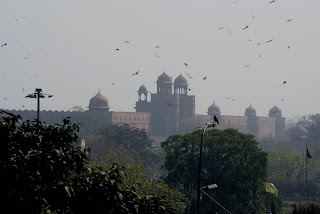 You cannot romanticise their presence, of course. The British East India Company were in India to make money - and they did, in staggering quantities, while enjoying all the privileges of the princely rulers and without, it seems, a thought for the ordinary people. But I cannot help liking them far more than the Victorians who followed them and condemned their adoption of local ways and shunned the wives and children of their marriages.
I'll leave you with this image of Empire - Queen Victoria dominating the scene in front of the Victoria Memorial in Kolkata. 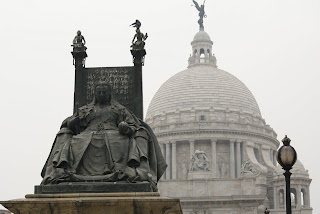 Louise Allen
Posted by Historical Romance Author at 5:00 AM

I agree with you about the fascination of the British in India in the late 18th-early 19th centuries. I always find the meeting of two cultures interesting and full of possibilities for a novelist.

If you haven't been there, you might also find the National Army Museum in Chelsea helpful. They have an excellent research library, too.

Fascinating post, Louise - it sounds as if you are really enjoying your research!

There is much about India & ,in particular, about colonial India which remains to be explored and discovered (even by native Kolkatans like me).
I found that the best place to start was in the old cemeteries in Kolkata. There is plenty of British Indian history which can be derived from there. Few know, for instance, about Walter Dickens (Charles Dickens's 4th offspring) grave being at the Alipore Cemetery in Kolkata (quite close to my childhood home). And fewer know that Warren Hastings,the Bengal G-G, whose ghost still haunts his mansion in Kolkata, was quite close to Mr Austen, Jane & her siblings.

How exciting (and brave!) to explore a whole new world, Louise. I wish you luck and look forward to the resulting books - I have no doubt they will be wonderful, as always.