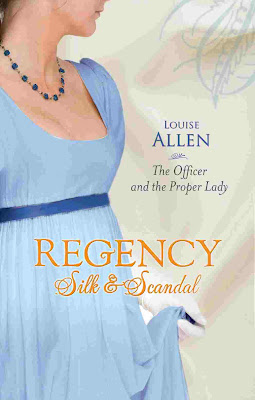 I can hardly catch my breath this month with three books out!
The seventh in the Regency Silk & Scandal continuity, and my second contribution to the series, is The Officer and the Proper Lady. My hero, Hal Carlow, is a cavalry oficer in Brussels just before the battle of Waterloo and his heroine, Miss Julia Tresilian, a most respectable young lady, is there too, in search of a husband.

Instead of an eligible gentleman, Julia falls for Hal, the worst rake in the cavalry. For once in his life Hal is set on doing the right thing, but when he is left for dead on the battlefield he finds he has underestimated well-behaved Julia, who will do anything to save the man she loves. The story can be read alone but it also brings the series to the point where the old scandal has become lethally dangerous. All will be revealed next month! 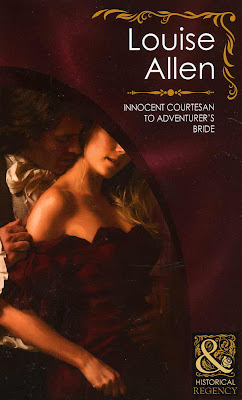 Also out in December is the third in the The Transformation of the Shelley Sisters trilogy. Innocent Courtesan to Adventurer's Bride is the story of youngest sister Celina. She has taken refuge from her bullying father in her aunt's brothel but an accusation of theft sends innocent Lina fleeing to the depths of the Norfolk countryside. She thinks she is taking refuge with one of her aunt's elderly ex-clients, but the arrival of his heir, the adventurer and scholar Quinn Ashley, a man with his own demons to fight, plunges her into more danger - and into love.

The third book is a complete departure for me - non-fiction. I love walking in London to locate places and people, often long gone, sometimes, surprisingly, still to be found. When I looked at my notes I realised that I had the makings of a walks book that would allow me to share this pleasure with enthusiasts for the period and so Walks Through Regency London was conceived.

There are ten walks - I had to stop somewhere! - taking in the St James's area; Hyde Park and Kensington Gardens; Mayfair North; Piccadilly and South Mayfair; Soho North; Soho South to Somerset House; British Museum to Covent Garden; Trafalgar Square to Westminster; The City from Bridewell to Bank and Southwark and the South Bank. 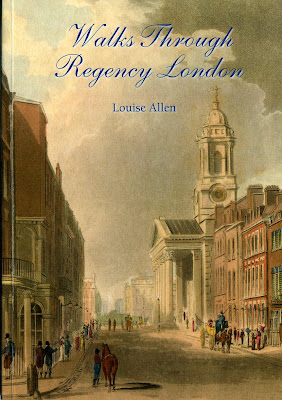 I used illustrations from my collection of Regency prints to illustrate the book in full colour - some fashion prints, some sporting, but mainly views of London from Ackermann's iconic Repository. Along the way I found places and objects I never expected - a startlingly lifelike waxwork of Nelson in Westminster Abbey; the location of Warwick House where Princess Charlotte escaped from her father to run away to Princess Caroline; Napoleon's "nose" and the surviving columns from Carlton House. I have drunk beer in Tom Cribb's own pub and in the only galleried coaching inn left in London; seen the scales that Byron and Nelson were weighed on; looked at a cell door from Newgate and admired the first public male nude statue in London.

The cover illustration is St George's Hanover Square in 1812.
For more information and how to get a copy see http://www.louiseallenregency.co.uk/ or email me at louiseallen.regency@tiscali.co.uk

A very happy Christmas and a wonderful New Year to everyone!

I already have the Walks book - which is fascinating and very, very readable. Looking fwd to hunting down the other two this week.

Like Jan, I have been browsing through the Regency Walks book very happily - gazing wistfully at snowy London outside my window to see if there's any possibilty of actually doing one of the walks.

Not a hope at the moment - I can barely make it to the corner shop!

I have two out of the three - the Regency Walks book is lovely and the Officer and the Proper Lady is a great read. Will be braving the snow tomorrow to pick up the last of the Shelley Sisters.

I (smug of Hereford!) already have all three. The Walks book is delightful and I can't wait to try some of them, next time I make it to London.

The last of the Shelley Sisters is a terrific read. I enjoyed it very much indeed. Haven't yet begun on the Officer and the Proper Lady because I'm reading the series in order. Have just started on number 5. Since the weather is too bad to go anywhere, I have exactly the right excuse to get on with my reading. Thank you, Louise!