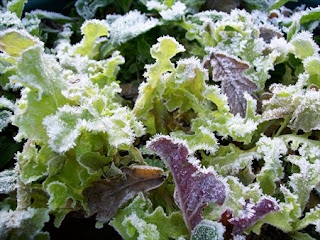 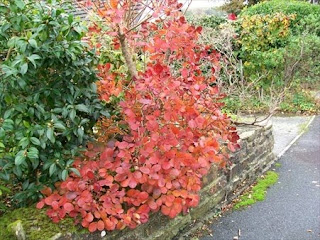 We've got a white world once more - and before Christmas! A rare occurrence in Cornwall. Even here the amount of snowfall can vary hugely, with several centimetres on high ground, and not a flake to be seen in two miles away. Back in the 1960s snow lay a foot deep in our village. No cars could get in or out. Our two regular postmen walked from the nearest town with cash for the post office so people would have enough money for rent, coal and food. Supermarkets hadn't yet arrived and everyone shopped locally and every back garden had a veg patch; a few fruit bushes and, if you were lucky, an apple or plum tree. Bartering was a way of life and is coming back as more people grow their own on allotments. A few weeks ago my husband was offered use of a south-facing, well-drained field for a minimum of ten years. He thought he'd died and gone to heaven. This field has never been cropped and was very overgrown. But after several days work with a brush-cutter - a kind of strimmer on steroids that requires the operator to wear a heavy duty rubber parachute-type harness onto which a sling clips to hold the machine. It has a handlebar similar to a bicycle but wider and both a metal blade and cutters of plastic sheathed serrated steel wire. He has to wear a full-face helmet, ear protectors and heavy gloves, and the thing is so heavy he can only work for about ten minutes at a time. But it's amazing, cutting through tangled brambles with half-inch stems like a hot knife through butter. I followed behind - a long way behind - gathering up what he had cut with a long-handled fork with curved tines called an "evil" - an apt name - and hauling it to a pile which, when we finally burn it, will be visible from space. Since man founded settlements people have been growing their own food. Concern about the use of chemicals in food production is inspiring ever more people to grow their own. It's hard work, but also enormously satisfying to harvest a crop you've watched grow from seed. And because you'll have more than you need, you swap surplus runner beans for someone else's new potatoes or strawberries. Spring seems a long way off while there's snow on the ground. But sitting by a warm fire with a pile of seed catalogues brings it closer.
Wishing you all a very happy Christmas and a new year that offers all you hope for.

Jane Jackson
Posted by Historical Romance Author at 8:21 AM

Email ThisBlogThis!Share to TwitterShare to FacebookShare to Pinterest
Labels: growing your own, Snow