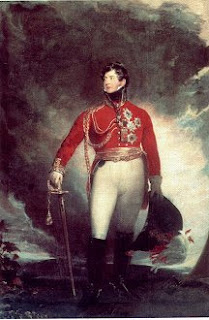 Two hundred years ago this month saw the start of the Regency in England. King George III was seventy two and after many years of illness was declared insane. He was put into the care of his wife, Queen Charlotte, but it was still hoped that he would recover, as he had done several times before. In July 1811 the King suffered a relapse and was locked away; by 1812 he was living in a world of his own, and although the Queen visited him regularly, he did not recognise her.

On 5th February, 1811 the Prince of Wales took the oaths of office as Regent and assumed charge of the government. He was wise enough to declare he would make no changes in the leadership of the government, at least while there was a possibility that his father might recover and one small incident at this time shows there was a reconciliation between the old King and his wayward son.

The King's youngest and possibly favourite daughter, Princess Amelia, had died at the end of 1810. She had been in love for nearly ten years with Charles Fitzroy, one of the King's equerries, a wholly ineligible match for a royal princess. Her passion had been kept secret from her father for nearly ten years, but in 1811 it was disclosed that she had bequeathed her property Fitzroy. He renounced the inheritance and the Prince of Wales divided her jewels between his sisters. This pleased the King when he heard of it. He wrote: 'The Prince of Wales has a heart. I always knew he had. I will never call him anything but George in future.'

It is some small comfort to think that the old King was content to relinquish power to his son, despite their earlier differences. The Whigs who had supported the Prince of Wales in opposition now expected that he would put them in power, but it soon became apparent that he had no intention of doing so. He changed his attitude towards the Peninsular War, and began to support it (although Wellington's successes in Portugal and Spain may well have helpedto sway him). Once the Whigs realised he was not going to put them into power they shifted their allegiance to his estranged wife, Princess Caroline.

These were unsettled times for the country: in the Midlands and north, frightened and angry workers thought that by smashing the new machines they would keep their jobs in the new manufactories. Food prices were rising, and lack of export markets was causing unemployment in the industrial new towns of Lancashire and Yorkshire. In August 1810 alone, five Manchester firms went into liquidation. London and the south might try to ignore the grim realities of the times but on 11th May 1812 it was brought home to them very clearly when John Bellingham, a bankrupt commercial agent, assassinated Spencer Percival in the lobby of the House of Commons. The next day an anonymous letter was delivered to Carl 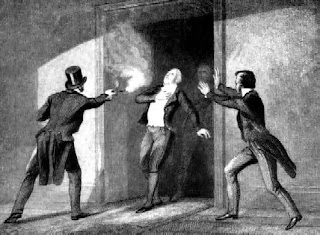 ton House, warning that the same fate would befall the Regent if the price of bread was reduced. There were ugly scenes in many towns, especially in the north and the spectre of the French Revolution was never very far away.

The mood of the country was changing: the bawdy, roisterous attitudes of the eighteenth century were giving way to a more cautious, conservative tone. The certainties of the Age of Enlightenment were being questioned and evangelical Christian principles came to the fore. The movement to abolish the slave trade was growing and the calls for electoral reform became louder.

The moral climate was changing, too. Before the French Revolution it was not unusual to find the illegitimate children of nobility being freely recognised by their parents (and in some cases being raised in the same household as their noble half-brothers and sisters), and sexual deviancy was ignored. By the Regency, however, rumours of Byron's relations with his sister and with other men brought such a wave of condemnation that Byron left Britain for good in 1816.

This is not to say that there wasn't romance, chivalry and adventure during the Regency, but it was a time of huge political and social upheaval. It was a time of grinding poverty and a harsh penal system; huge fortunes could be lost in an evening's gambling, while reformers worked tirelessly to improve the lot of their fellow man. Exciting, challenging and perhaps not quite such a frothy and insubstantial time as we sometimes portray it.

Queen Charlotte died at Kew on 17th November 1818 and the old King followed on 29th January 1820. Finally, the Regent became King George IV and Britain moved inexorably on to the Victorian period.

Sarah Mallory/Melinda Hammond
Posted by Historical Romance Author at 6:30 AM

I think the appeal of Regency is romance in the face of a strict moral/social code of conduct. The stakes for the love affair are that much higher during the Regency and people are that much more repressed. It makes the contrast between public and private a drama in itself.

I love the way the Regency is a stepping stone between the georgian era and the world of the Victorians. So much is familiar and yet without side whiskers and sermons!
I do like the dramatic assassination print. (Probably too many ss's in that!)

Thanks for dropping by, Erin and Louise. I think there was a mood of uncertainty during the Regency that gave the era and added brilliance.

And there was a certain freedom - the older generation must have thought it outrageous that their children should dress so scantily (now where have I heard that before?)