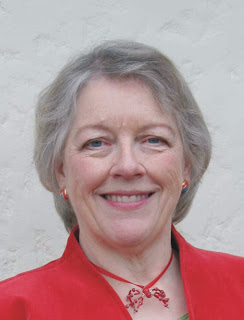 Hi, this is Jo Beverley.

Anyone reading my February publications might think I write paranormal romance, what with a magical statue and a great earth demon. In a way it would be true, because I love dabbling in fantasy and sf, but in fact weird stuff is part of history.

In my Regency romance, Forbidden Magic, my heroine owns a family treasure, an ancient statue called a sheelagh-na-gig. These naked female figures that some might think obscene we

re, and sometimes still are, found in church walls. There's debate about whether they were warnings of the evils of sex and women (very early Christian, alas) or part of goddess-worship.

As with most magic, Meg's sheelagh grants wishes, but with a sting in the tail. The sheelagh provides a magical solution to Meg's poverty -- an earl offering marriage, but the Earl of Saxonhurst definitely brings a sting. In addition, Meg can't bring herself to let him know that she owns and has used such a scandalous object.

You can see a picture of a sheelagh-na-gig here.

Scroll down a ways, past all the crosses. I didn't post the picture because they really do shock some people.

You can read an extract from Forbidden Magic here.

Forbidden Magic will be out soon, in print and e-book. In the UK, you'll probably have to get the print edition on line from Amazon or The Book Depository.

My other offering is e-edition only. It's an early novella from a collection that's long out of print, so I'm delighted to see it available again. If you don't have an e-reader, you could read it on your computer. Not ideal, I know, but a possibility.

This one is Georgian and involves a rake, the vicar's daughter, and a pagan ritual in rural Suffolk. There were, maybe still are, plenty of rural pagan rituals. This one takes a twist on a certain calendar date, and thus the great earth demon Waldborg rises....

I can remember thinking, back in the early '90s, that it was amazing what one could get away with in a novella! You can read the beginning here. 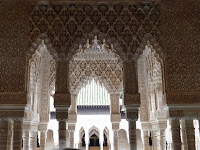 It's available in all e-formats, but the Kindle edition is here at the lovely price of 1.72 pounds. Give it a go.( My inability to easily type the pound sign on my North American keyboard is also historical. In 18th century books they did the same.)

I hope you enjoy these offerings.

I'm in Spain at the moment, so here's a picture from the Alhambra.

How do you feel about paranormal elements in historicals? How do you get your historical romances in the UK? Do you wish you were in Spain? Are you in Spain?

Any and all comments of a few lines or more will be entered in a drawing for a copy of Forbidden Magic. Apologies, but on this blog the winner must have a postal address in the UK.

Jo
Posted by Historical Romance Author at 9:04 AM

Ooh, yes, the sheelagh-na-gig is quite a shocking thing to see in a church!

I haven't read a lot of historicals with paranormal themes, but it can work and when done well, I do enjoy the blend of the two elements. It's something I'd like to try myself one of these days.

I mostly buy my historicals from Amazon.co.uk and for Kindle when that format is offered. Otherwise, I'll order print versions.

Yes, it might be nice to be in Spain. Visited there a few times, in my younger days, but haven't been lately. Remember Barcelona as wonderful!

Jo I would love to be in Spain at the moment! I love a hint of supernatural in books - I've written a couple myself!

The sheelagh - thing was very off-putting! It must have given the governesses a hard time trying to explain it to curious youngsters!

The winner of a copy of Forbidden Magic is Portia da Costa. Congratulations, Portia.