Yesterday I was at the birthday party of William Wilkins who was born on 31st July 1778. The party was held at the Theatre Royal in Bury St Edmunds, which he himself designed for the town. It opened its doors in October 1819, making it the only Regency-built theatre still in regular use today. It is a gem of a theatre and William Wilkins was very proud of it, but it didn’t at first get the reception from the townsfolk that he expected.

Wilkins - and his father before him - ran the Norwich Company which toured seven East Anglian venues. Bury St Edmunds was the most profitable of these, despite playing in a very cramped space on the upper floor of the Market Cross, so William decided to reward the town with a lovely new theatre. 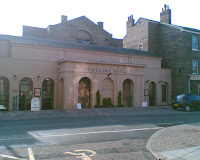 He was very keen on classical architecture and was addicted to the idea of pure air circulating around his building. He was also concerned that his best patrons should be spared the indignity of mixing with the more disreputable members of the audience at any point during the proceedings.

To facilitate this,  the four separate areas of the theatre had their own entrances, the Dress Circle box patrons wafted straight through the spacious, arcaded foyer into their semi-enclosed boxes, the Upper Circle boxes were up one flight of stairs from the foyer, the Pit customers jostled downwards and around from an outside entrance, and for the cheap seats in the Gallery - 120 of them! - people would have to squeeze through a narrow side door and up two flights of stairs.

With this vision in mind, Wilkins cannily made use of the local topography and built his New Theatre where the south side of town slopes downwards, so the best seats were at street level and he could reduce construction costs in not having to dig out the Pit. He elegantly fitted out his lovely theatre, organised the very popular John Bull as the opening play and threw open the doors in welcome.

The townsfolk, though, weren’t at all grateful. As far as they were concerned, the New Theatre was on the very edge of the unfashionable side of town and far more inconvenient to get to than the old Market Cross right in the centre. So - for the first week at least - they voted with their feet, leaving the Norwich Company to play to empty houses. Audiences did pick up in the subsequent weeks, but it must have given William Wilkins a very nasty turn, thinking of his huge investment that he might not get back!

Now, of course, Bury St Edmunds has expanded and the Theatre Royal is seen as being in the historic centre. Which brings us back to the party - the question we were asking was what do you give a man who is 233 years old? We came to the conclusion that posterity isn’t a bad gift.


Jan Jones
.
Posted by Historical Romance Author at 11:48 AM

What a wonderful story, Jan, thank you so much for posting it. Hope the party didn't get too rowdy!

A fascinating history, Jan - I'm glad it all worked out in the end!

We were very well behaved. Bubbly quaffed very genteelly and no squabbling over the last slices of cake.

Ha! Me too, Jane! Another time I'll blog about their commitment to Georgian drama.

Lucky you, Jan! I just love that theatre. I went to see a production of Douglas Jerrold's 'Black-Eyed Susan' (1829) there - complete with delightful 19th century scenery. It made me long to go again.

Oh, they've done many more Georgian/Regency plays since then. All a complete delight.

They also do half-a-dozen 'rehearsed readings' a year, so you get the flavour of a play without the expense of a full production.