Jane Austen Made Me Do It! When Laurel Ann Nattress of Austenprose contacted me about a new anthology she was putting together I knew straight away I'd like to be a part of it especially as I'd be sharing the wonderful company of fellow authors Amanda Grange, Monica Fairview and Jo Beverley.
Our brief was to write a 5000 word short story for the anthology, Jane Austen Made Me Do It, and as long as it related to Jane Austen in some way we were invited to let our imaginations take flight. The result is a collection of 22 stories-a veritable chocolate box of tales inspired by Jane Austen, some historical and some contemporary.

Amanda Grange's story is Mr. Bennet Meets his Match.
On his daughters’ wedding day, Mr. John Bennet’s mind drifts back to the events of twenty-three years before, and the events leading to his own marriage . . . Encouraged by his parents to marry sooner rather than later and thereby provide a new generation of Bennet heirs for the estate, John laughed at their hurry. However, a meeting with his Cousin Collins, who was next in line for the entail, and an unfortunate accident, made him reconsider his position, and the proximity of the lively, pretty Miss Jane Gardiner sealed his fate.

Monica Fairview's story is Nothing Less than Fairyland.
In this gently humorous story inspired by Jane Austen’s novel Emma, the day has come for Mr. Knightley to move into Hartfield, but Mr. Woodhouse is still not reconciled to the marriage. Trouble looms on the horizon, unless Emma can quickly come up with a way to convince her papa to accept Mr. Knightley’s presence.

Jo Beverley's story is The Mistletoe Kiss.
Elinor Carsholt is living on the charity of a connection of her late husband’s in the village of Chawton, facing a dismal future for her three young daughters, until she begins to hope that her oldest daughter Amy has caught the eye of local baronet Sir Nicholas Danvers. Amy must have been sneaking out for clandestine meetings, which disturbs her, and there is a ten-year age difference, but still, it would be the saving of them all.
When she and the girls go out on Christmas Eve to look for holly, ivy, and mistletoe, Elinor is still undecided and rejects Amy’s urging to go to Sir Nicholas’s estate in search of mistletoe, but then local resident Miss Austen drives by in her donkey cart and pauses to chat.Elinor doesn’t really approve of Miss Jane Austen, for she’s been told she writes novels, which Elinor thinks a bad influence on young female minds, but she has to be polite. Miss Jane turns talk to love and marriage, expressing far too romantic a view, but she also assures them all that Sir Nicholas would be delighted if they searched his orchard for mistletoe, changing the course of their lives.

My story is Waiting.
Captain Wentworth and his beloved Anne Elliot have waited almost nine years to be together. At last all misunderstandings are swept aside. They have declared their love for one another, and all that remains is for their union to be blessed by Anne’s father, the irascible Sir Walter Elliot, and for the family members to be told. As Anne and Frederick ponder their futures each is reminded of the past, and all that has happened.
Persuasion is my favourite Jane Austen novel, and so I knew straight away this was the story I wanted to write. I'd always wondered how Anne Elliot's family would react to the news that she and Captain Wentworth were going to be married, and I also couldn't resist having them look back to the time when they first met. It was such fun writing the characters of Sir Walter Elliot, Anne's sisters Elizabeth and Mary, and of course Anne and Frederick Wentworth too!

Captain Wentworth was awake early to witness the greyness of the day, mists rising in a smoking pall above the city along with the icy rain which lashed at the windows of his lodgings in a manner fit for any storm at sea. His spirits were high, though to tell the truth, he was more than a little nervous at the prospect of the interview he was about to face. As he adjusted the cuffs at his wrists, he glanced out of the window to observe the dash of carriages rolling round the square depositing new arrivals in Bath.

Had it only been yesterday when the unimaginable had happened at last? Frederick recalled every second of the encounter, revived every feeling. They’d met in Union Street. He’d been almost afraid to witness her reaction to the heartfelt letter he’d sent. But he needn’t have worried. Her eyes had spoken the sentiments she could not immediately express. Anne Elliot had taken his arm, and he’d sheltered her from the rain with his umbrella. 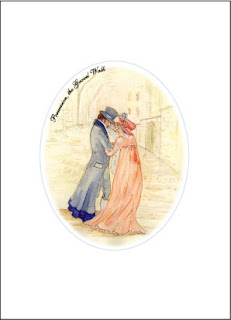 From his viewpoint past the railings on the other side of Queen Square, Gay Street effortlessly progressed up its steep incline, elegant façades on either side ascending to the Circus much as he and Anne had advanced before turning off to find the relative quiet of the Gravel Walk. Heedless of the sauntering politicians, bustling housekeepers, and flirting girls around them, they had confessed all their hidden, secret feelings, buried for so long.
“She loves me, as I love her,” he said out loud to confirm the truth to himself. He wanted to open the window and shout it out to the muffin man below. “Anne Elliot never stopped loving me from the day we parted. Oh, that my stubborn pride had not prevented me from seeking her out sooner. I’ve wasted almost nine precious years when we could have been together! I admit; I felt very differently all those years ago when she rejected me. I held her in contempt then, although sweet Anne, I now believe, was perfectly justified in withdrawing from our engagement. I was proud, made to feel that I was not good enough for a baronet’s daughter, and the truth of it stung me to my very soul. But there is little point in grieving over the past; I must look to the future with the girl I love most in the world by my side. My only fear, nay dread, concerns the interview I am to have with her father this morning. Not that his consent really matters. Anne will not be persuaded against her wishes this time, not like the first time. We are older, and, I hope, much wiser, both secure in the knowledge that our love is ever true and constant. But, this will not do, I have an appointment with Sir Walter, and I must not be late!”

I had a lot of fun writing this story-if you know a Janeite, why not pop it in their stocking this Christmas?!

Jane Odiwe
Posted by Historical Romance Author at 9:13 AM

Sounds great, Jane, perfect for that coffee break read when you don't want to get caught up in a whole novel......

Yes, Sarah, it's just little tastes-perfect for a break!

Like you, Jane, I feel so fortunate to have been a part of this anthology and to have my name on the same cover as the authors you named (along with you!). Again, let me say how much I loved your story. Persuasion is such a rich story so full of possibilities for inspiration.

Thank you, Bren for your very kind words! I'm sure your story is the start of a new career for you, and like you, I've so enjoyed being a part of this book.

I had such a lot of fun being a part of this anthology and I loved reading the other stories. I was amazed at the variety of stories on offer, and the icing on the cake is that it has been a hit with Austen fans as well as with general readers.

Amanda, it is lovely to think that the book has such a wide appeal!