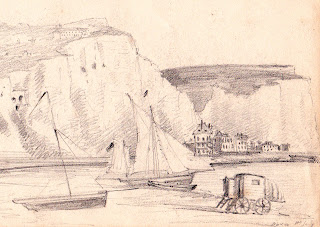 "You should have gone to Cromer, my dear, if you went anywhere.

Perry was a week at Cromer once, and he holds it to be the best
of all the sea-bathing places. A fine open sea, he says, and very
pure air. And, by what I understand, you might have had lodgings there
quite away from the sea – a quarter of a mile off – very comfortable…”
Mr Woodhouse advises on sea bathing in Jane Austen’s Emma.


Perversely, given that it is snowing as I write, I thought I’d tell you about my recent discovery of Cromer as a Georgian and Regency seaside resort. Of course, it is no discovery to anyone who knows Emma better than I do, but I had always thought of Cromer, just along the coast from where I live, as a Victorian and Edwardian resort. It has a Victorian pier, some magnificent hotels on the cliff top and most streets seem to be full of late 19th and early 20th century seaside villas and lodging houses.


We took advantage of a sunny day last week to have a walk there so I checked the Pevsner architectural guide first and discovered its late 18th century fame. Mr Pratt, author of Gleanings in England (1794) is enthusiastic about the surrounding area but critical of the town itself which has “mediocre buildings and foot-piercing streets.” He obviously ran foul of the cobbles!


Thomas Potts’ Gazetteer of 1810 tells us that Cromer as a “straggling place without form or order” with 676 inhabitants. “It is chiefly inhabited by fishermen; who catch great quantities of crabs and lobsters from May to October.” Cromer crabs, flourishing on the unique chalk reef just offshore, are still a famous local delicacy. Potts goes on, “It has for some years past, been a summer resort of much genteel company, on account of its conveniences for sea-bathing, and the pleasantness and beauty of the surrounding country.” 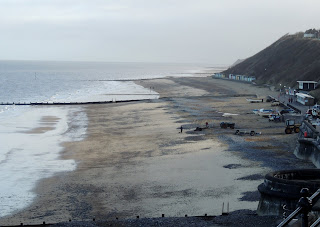 There was a bathing house on the beach, long since vanished, and of course, bathing machines in abundance. Pratt says “…the Beach itself is an object of particular attraction. It is broad, firm and smooth, I think, beyond any I have seen.” And Cromer beach is still just as he described it, as you can see in this chilly picture. 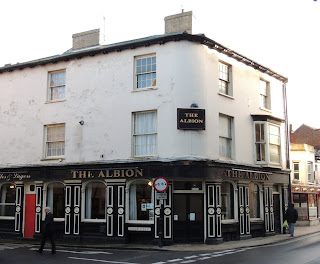 The little amateur sketch with two bathing machines at the top of this post is of somewhere on the South coast I think, not at Cromer, but the machines are just the same kind with their umbrella-like hood at the front to protect the modesty of the ladies and to screen them from the sight of the men, who always insisted in bathing naked. 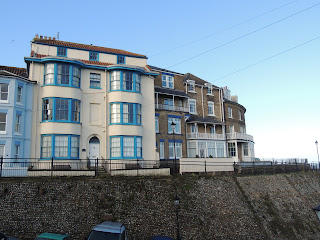 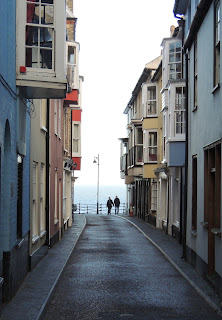 There is not much obviously left of Georgian Cromer, but the Albion Hotel is of that date, although it now has a Victorian pub frontage. The view of the beach was taken from The Crescent, shown here, an elegant terrace of the Regency period that would have been much in demand by the more prosperous visitors. In contrast, , is one of the streets of the old fishing village with its modest houses and bay windows each designed to give the lodgers at least a glimpse of the sea.

Have you ever been led to explore anywhere -  other than of course! –  as a result of reading a Jane Austen novel?

Interesting post; like you, I'd always thought of Cromer as a Victorian and Edwardian resort, but then I don't know Emma well as I like it least of Jane Austen's books. I suppose, in reality, when sea-bathing became fashionable because it was thought to be medically beneficial, people would have gravitated towards their nearest good beach (especially given the time it took to travel).

I explored Lyme Regis after reading Persuasion, and of course walked out along the Cobb and climbed the treacherous steps! The cottages on the front are tiny. Lyme Regis is still a very attractive seaside town.

I also went off to explore Bath with extracts from Austen books in hand a long time ago, in my teens, and again more recently with added extracts from Georgette Heyer! I've always been pleased to spot a ha-ha wherever I can, and remember JA fondly.

How hardy people were in the Regency! Cromer has always stuck me as the coldest place God made, outside Siberia, and the sea comes straight off the Arctic ice floes. Men could strike out swimming in a manly fashion but Ladies weren't supposed to kick their legs, were they?

AAAARGH, that's all I can say. AAAARGH-sodding-AAAAAAAARGH

I actually visited Cromer when we lived in England. I have to agree, even in summer, it was chilly.

I'd love to go there in summer, but am not so sure about the bathing! Looks like a lovely little place and I adore crabs :)

Love the tiny street, Louise, with the bay windows!

I've never been to Cromer-I wonder if Jane Austen visited but it sounds the sort of place she would have liked being smaller and less fashionable than the big resorts like Brighton. I loved your photos too-a fascinating post!

I visited Cromer when I lived in England in the late 1990's. I took in a lot of the JA sites while living in England for four years, and in the numerous vacations there since leaving.