In 1995 my life completely changed when I watched a television series on a Sunday evening for six weeks. It was Pride and Prejudice, starring Colin Firth and Jennifer Ehle, adapted by Andrew Davies, and directed by Simon Langton. 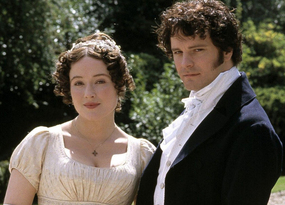 I'd always enjoyed the adaptations of Jane Austen's books on the television, but there was something about this one which made me see the book in a new light, and also fired my imagination - and I'm not just talking about Colin Firth! I think it may have been the fact that it was made rather like a film, in that real houses and locations were used, rather than sets, built and designed, which can give the action an artificial feel. There was an energy about the whole production that was very different from previous adaptations, and though I had enjoyed those immensely, this one set me off an a journey of discovery. I'd always loved Jane Austen's books, but I wanted to find out more about Jane herself. This series re-kindled my interest in both Jane Austen and her books, and started me off on taking my own writing more seriously, so you can imagine when I got the chance to go and see the director talk about the making of Pride and Prejudice, I was very excited!
I'm very lucky to have some wonderful friends - one of them, Helen Porter who runs P&P Tours, invited me along to an evening in Bath with Simon Langton, and he gave a very interesting talk about making this iconic series. What was more, I actually got to meet him afterwards - I had to keep pinching myself as I sat next to him sipping Pimms and discussing Jane Austen - it was such a treat!
What I hadn't appreciated was the other amazing work he's been involved with over the years or that he is the son of the actor, David Langton, who played Lord Bellamy in Upstairs, Downstairs, a favourite series of mine many years ago. He directed his father in a few of the episodes! Some of Simon Langton's credits include other favourites of mine: Jeeves and Wooster, Smiley's People, The Duchess of Duke Street, and Rebecca, to name but a few.
He gave a similar talk at Chawton in April as part of the 200 year celebrations - you can listen to a podcast of it here and here is a link to a video about the making of the television series.
I still love watching it, and the more I learn about the production, the more enjoyable it gets!
Jane Odiwe

Posted by Historical Romance Author at 7:45 AM

Jane, what a fabulous experience, thanks for sharing. I loved the other programmes you mentioned, too. Was it the Jeremy Brett version of Rebecca he directed?

How lucky - sounds a great evening. wish I'd been there.

Thank you, Amanda and Fenella- I wish you'd been there, too! Yes, Amanda-it was the Jeremy Brett/Joanna David version of Rebecca.

That's my favourite version of Rebecca, I wish I'd been there, I could have asked him if it's ever coming out on DVD! Do you know if he's giving any more talks anywhere?

What a treat, Jane. Lucky you! I bought the BBC book 'The Making of Pride and Prejudice' which has lots of interesting stuff about costumes, the dances, finding the locations etc, all with wonderful photos. But that's nothing like so exciting as hearing Simon Langton talking about it!

Amanda, he mentioned the fact that it's not on dvd, but it's worth taking a look at youtube!
Elizabeth, it was a real treat - I've got that book, which I love, wish it had been a bigger book!