At Home in London With Jane Austen

The main tourist season is over, the schools are back and London is rather less hectic - so I thought it might be a good time to suggest a walk through Jane Austen's London.
When I researched Walking Jane Austen's London I planned eight routes, each including places that Jane knew, places that appear in her books and a sprinkling of other interesting places from her times.
It is little known that her banker brother Henry had five homes in London and that four of those survive, although he would have trouble recognising two of them!
A shopping expedition to Knightsbridge and a brisk walk in Hyde Park and Kensington Palace Gardens can be combined with a visit to the two most transformed homes, both of them refaced and with extra floors added in the late Victorian period. 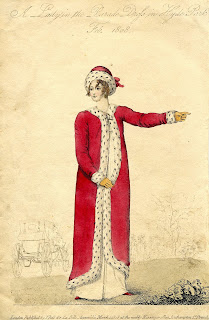 (The Illustration shows a lady in "Parade Dress in Hyde Park 1808)
Close to the corner of Hans Street and Sloane Street is 64, Sloane Street, which was home to Henry and his wife Eliza between 1809 and Eliza's death in May 1813. It has been refaced and an extra attic floor added, but inside it is the same house that Jane stayed in while she was correcting the proofs of Sense and Sensibility in 1811. She and Eliza "walked into London" to shop from here, a reminder that this was a separate village at the time and that London did not begin until the Hyde Park Corner turnpike gates.
It was a convenient base for walks in Kensington Palace gardens, a very fashionable location and one she wrote about visiting in letters home. In Sense and Sensibility Mrs Jennings and Elinor met Miss Steele there, "...but Marianne, who knew that the Willoughbys were again in town and had a continual dread of meeting them, chose rather to stay at home, than venture into so public a place."
Henry and Eliza lived rather a fashionable life, throwing parties that were mentioned in the Morning Post and maintaining a carriage. Jane wrote of one outing, "The driving about, the Carriage being open, was very pleasant. I liked my solitary elegance very much, & was ready to laugh all the time, at my being where I was...I could not but feel that I had naturally small right to be parading about London in a Barouche." 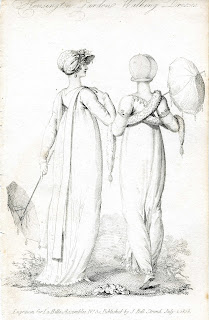 Henry left the Sloane Street house when Eliza died and went to live over a branch of his bank in Henrietta Street, Covent Garden for a while, but he returned to Hans Place, just around the corner. Jane stayed there for the first time in 1814 and liked it very much. It is the most changed of all Henry's surviving London homes and the Blue Plaque refers to a "house on this site" as being his.  However the inside is the original, refaced, with an added floor, the front door moved and the garden, which Jane described as "quite a love" lost to the street behind.
It was at this house that Jane was staying when she transferred her business to publisher John Murray. Her room was on what is now the side, over the Blue Plaque and the sitting room where she wrote letters and corrected proofs, is at the back.
(Kensington Gardens walking dresses for 1808) 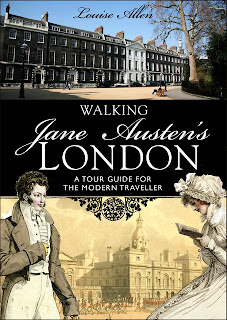 Henry's banking business became bankrupt and he left London in 1816 for a new career as a country parson, ending Jane's visits to London.
Henry's  London house 1801-4 remains, now a small hotel, at 24, Upper Berkeley Street and the Covent Garden house (with a Rohan shop where the bank used to be) is also easy to find.

What a wonderful book, Louise. My children have been asking me what I'd like for my birthday in November. This would be a perfect choice.

And I love the lady at the top, looking like an elegant female version of Father Christmas: Miss Christmas, perhaps

Louise - I really enjoyed the book, which I think is excellent not only for fans of Jane Austen but also for anyone who enjoys Regency books set in London since you identify the location of so many places which feature in them, for example Gunter's.

Thanks for sharing this blog with us, get Single Storey Extension Builders Uxbridge