The English in Japan

This year is the 400th anniversary of the first establishment of trade relations with Japan (or the ‘Japonish nation’ as the English called it then).  The English ship the Clove left our shores in January 1611 and arrived in Japan over two years later, in June 1613 – a very long journey even by their standards.

The expedition was led by a man called John Saris who brought with him letters and presents from King James I to the Japanese ruler.  The king’s letter was addressed to “The Emperor of Japan” and calls him a “mightie prince”, but what he didn’t know was that the man who would eventually read it wasn’t the emperor at all, but the Shogun, Tokugawa Ieyasu.  The emperor at the time was a mere puppet and the Shogun had all the power.  I’m assuming he received the presents as well!

The English were very lucky in that there was already a compatriot of theirs living in Japan – Will Adams.  He was originally from Gillingham in Kent and had been apprenticed to a shipbuilder at the age of 12.  He later served on Queen Elizabeth I’s ships as master and pilot, and spent about twelve years working for the so called Barbary Merchants, but then he wanted to experience new things and signed on with the Dutch.  He arrived in Japan as a pilot on board the ship Liefde in the year 1600 and against all the odds, managed to establish himself there.  He was trusted by the Shogun, was given a small estate, married a Japanese woman (even though he was already married in England) and had children.  He stayed in Japan until his death in 1620.

When John Saris arrived in 1613 he therefore had the perfect opportunity to establish his so called ‘factory’ (trading post) and prosper with the help of a man with lots of local knowledge and experience.  Adams helped him translate King James’s letter and arranged an audience with the Shogun, who granted permission to trade and gave the Englishman gifts in return.  He even allowed the English East India Company’s ships the freedom to enter any port and to settle wherever they wanted.  But Saris didn’t listen to Adams' advice and from then on his venture was doomed.  He tried to establish a factory at Hirado, an island outside Nagasaki, but it didn’t work out and had to be abandoned in 1623.  From 1630-1853 Japan was closed to all nations except the Dutch.

Last week I visited the British Library in London where they had a mini exhibition about the English in Japan.  I was thrilled to see the actual letter from King James I, as well as a letter written by Will Adams himself to some English traders in Bantam, Java, in 1611.  Adams was obviously an educated man as he wrote fluently (although his handwriting was so messy I couldn’t make it out).  There were also two contemporary maps of Hirado/Nagasaki and the sea route to the capital Edo, one of them beautifully illustrated in the Japanese style.  It was especially interesting for me to see these as I visited Nagasaki when doing research for my novel The Gilded Fan and I couldn’t help but wonder what the English sailors made of it.  I found it fascinating and exotic in the 21st century, but how much more so must it have been for the men in 1613?  It’s an amazing place! 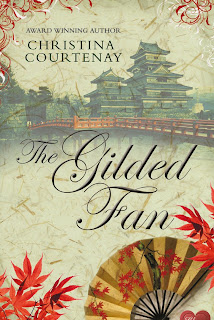 How nice to have a look at what was going on in 17th century Japan. Will Adams sounds a most interesting character. And I liked Joceline's painting, too.