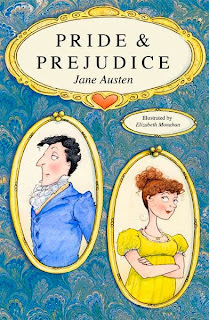 If you love Pride and Prejudice - and who doesn't? - there's a wonderful new edition available on Kindle with original illustrations by Elizabeth Monahan. We're delighted to have Elizabeth as our guest here on the blog to talk about her work. 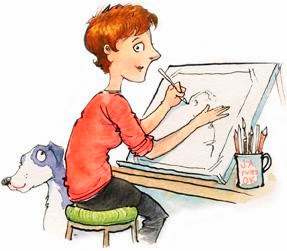 Over to you, Elizabeth!

Thanks! I am a freelance illustrator, having graduated from The Bournemouth and Poole College of Art and Design. I’ve illustrated a number of children’s books for Oxford University Press, Channel 4, and Dominie Press, and recently illustrated a new edition of The Wizard of Oz, published by Quarto.

I live in with my husband, who is a freelance photographer and our retired, ex-racer greyhound, Mister Bingley!
I have loved Jane Austen’s books for as long as I can remember, and her novels have been a touchstone for my enduring love of historical fiction. I studied English Literature at , and chose the works of Jane Austen as the subject of my final year degree thesis. After this, I took a sabbatical from illustrating, and worked as a secondary school English teacher for 3 years, before returning to my easel in 2007.

The advent of new technologies inspired me to realize my dream of producing a self-published version of Pride and Prejudice, using my own illustrations. I’ve been really encouraged by the success of my ‘Cast Of’ series, a set of paintings that I produced in 2011, featuring all the main characters from each of Austen’s six novels. I’ve been selling prints of them through my own Etsy shop: ‘BlueSkyInking’, and also through the in Chawton, Hampshire.

I wanted to honor the bicentenary of Pride and Prejudice with my own tribute, and decided to produce a newly illustrated edition that focused on the satirical nuances of the plot rather than the more familiar romantic themes. I’ve enjoyed the many adaptations of Pride and Prejudice on TV, especially Andrew Davis’s seminal 1995 BBC interpretation, but felt the time was right to offer a fresh insight into the book, with contemporary illustrations highlighting the timeless quality and enduring wit of Austen’s prose, without patronizing the reader. I hoped this approach would appeal to a new generation of Austen fans, who might be unfamiliar with the novel, and crave something more rewarding than the limited scope offered by the film and TV adaptations. However, I didn’t want to alienate Austen’s established fan-base, so I had to be careful not to make the artwork too ‘modern’. I started by making very rough pencil sketches and once I’d settled on a style, I worked them up into something more ‘substantial’. I also spent a lot of time in art galleries, museums and public libraries, visiting bookshops, and researching the work of contemporary illustrators whom I admire, to gain insight and inspiration. 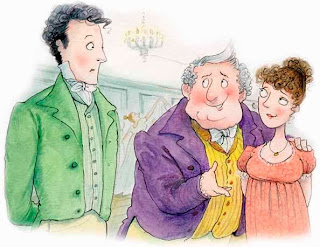 I also had to decide how to ‘personalize’ the characters. I knew that they would need to be slightly ‘cartooned’ in order to convey the humorous situations in which they find themselves. Austen gives very little away in terms of her characters’ physical appearance, which was something of a blessing for me.

I was acutely aware that everyone has a personal vision of how Elizabeth and Darcy should ‘look’. My husband and I once spied Matthew Macfadyen shopping in Arundel, . I couldn’t help myself! “My goodness, it’s Mr. Darcy!” Thank goodness he didn’t hear me! He was standing outside a shop, looking a little lost. I’m grateful that I didn’t introduce myself because, seconds later, his wife Keeley Hawes (“My goodness, it’s Lady Agnes Holland” [Upstairs Downstairs]), came scuttling round the corner, weighed down by a mountain of shopping bags. Memories of that serendipitous afternoon returned to me as I sat pondering my first rough sketch of Mr. Fitzwilliam Darcy. After much soul-searching, I opted to go with the interpretation that I’d formed on first reading the book, when I was sixteen! 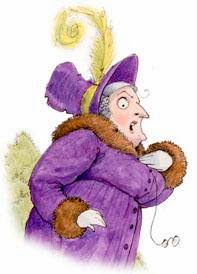 When I am commissioned by a publisher to illustrate a book, I usually work with a picture editor and designer. I will work to a specific brief and follow a design-template that directs me where to place a picture in relation to the text. Once the artwork is finished, it’s sent off to the publishers, who’ll use their own design team to marry the text and illustrations, before it’s sent to the printers. Ta-Dah!

I enjoyed no such luxury, or support, (apart from the odd cup of tea and macaroon from my husband, and words of encouragement from family and friends alike). I had to make all those decisions on my own. Once I’d settled on a ‘style’, I mapped out the book in a rough format, producing a ‘storyboard’ version, which covered the walls of my studio. All in all, it took ten long months. I continued to finesse the completed artworks, which took a further three or four months. In total, 64 illustrations made it in to the book, although I rejected hundreds in the process. 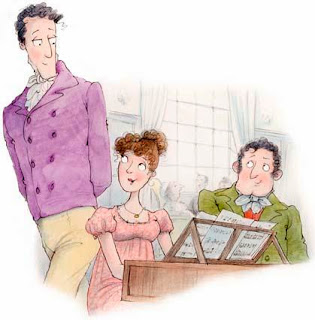 Perhaps the most time-consuming (and frustrating!) aspect of putting the book together was the technological side of the process. ‘Pride and Prejudice’ is my first foray into the ‘dark-arts’ of self-publishing, so my learning curve was vertiginous! I had to learn how to put the document together and follow the specifications carefully so that my document would upload correctly as an e-book. This took many attempts and re-starts, but I got there in the end!

I hope to illustrate all of Austen’s novels. My next challenge is ‘’ for its bicentenary in 2014. I hope it won’t take as long as Pride and Prejudice. I’ve started to do rough outlines for the main characters, and I’ll hope to post regular updates of my progress. I’ll have to re-read the book over the Christmas holidays, and I hope to start in earnest in the New Year. I hope to follow it up with ‘Emma’ in 2015 and ‘Persuasion’ on 2017. ‘Sense and Sensibility’ and ‘Northanger Abbey’ will perhaps appear in 2016, but I may need a rest by then!

Posted by Historical Romance Author at 11:07 AM

I loved these and recognised immediately which scenes in the book they illustrated. There's a sense of fun about them as well as an empathy with the characters and their situations. Congratulations. I hope the book does well. It deserves to.

Elizabeth, I just love your illustrations, they're brilliant. They made me laugh our loud, especially Lady Catherine. They don't even need any captions to say who they are.

More power to your pen!

Wonderful illustrations, Liz, they really capture Austen's humour. What a treat for Austen fans to have new illustrations!

I love your illustrations, Elizabeth-it's lovely to see you here!