Sir John Soane’s Museum’s new exhibition celebrates the end of the Napoleonic Wars with the signing of the Treaty of Paris in 1814. For Britain, it had been a long and bloody conflict, beginning with the Revolutionary Wars in 1793. The war gradually extended to the whole of Europe, including Russia, and the U.S.A.. Indeed, Napoleon had had his expansionist’s eye on Egypt and even India. During the wars, over 3,500,000 people lost their lives. 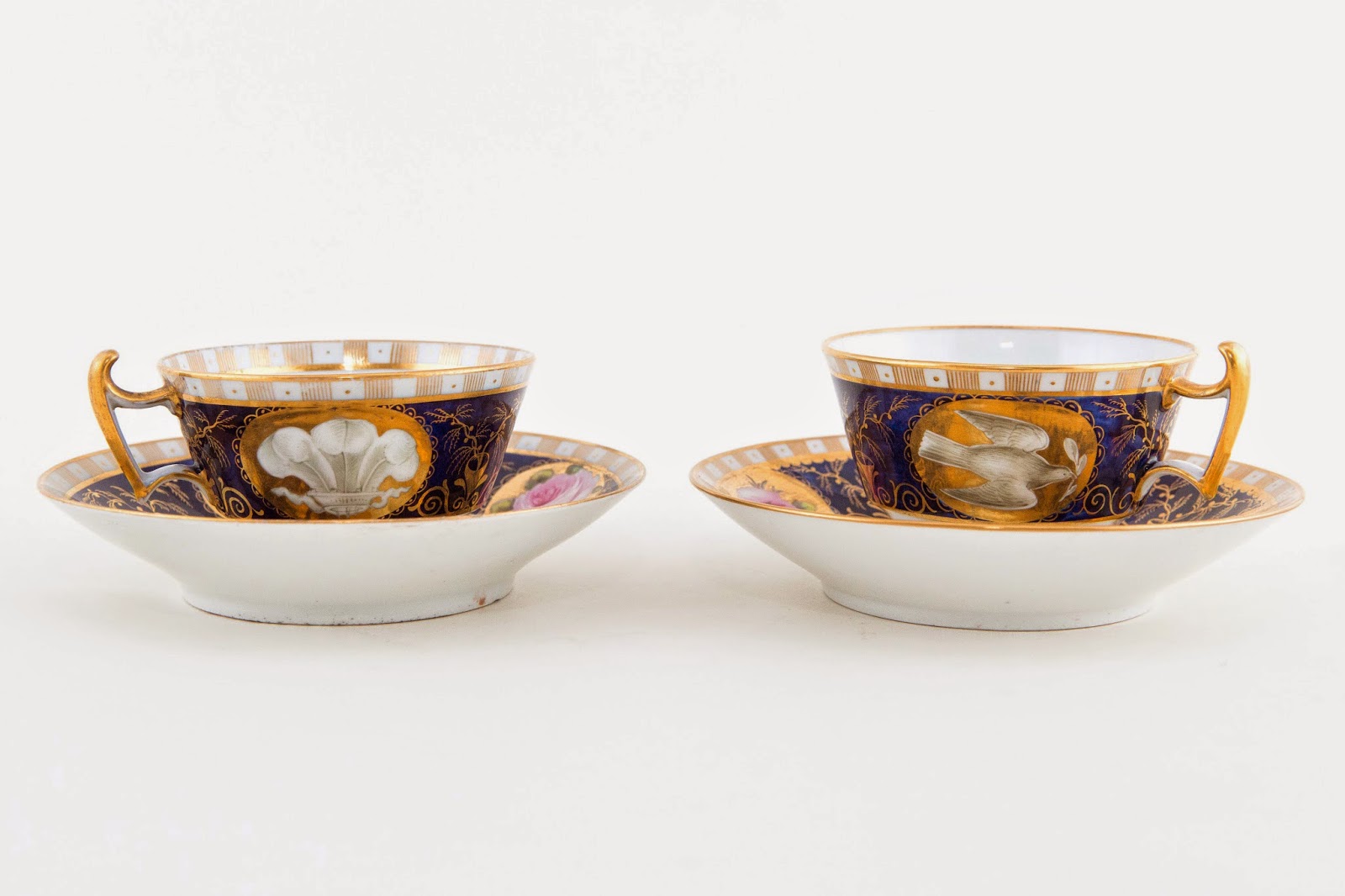 What I found interesting was that Britain in 1814 was celebrating Peace, not, as might have been expected, Victory. The souvenirs of the time shows this very clearly. The display includes an attractive Coalport porcelain ‘Peace of Paris’ tea-set, for example. Or, if you were less wealthy, a ‘Peace of Paris’ Bristol pottery jug might take your fancy. A fashionable ivory brisé opera fan has a roundel depicting an allegory of peace ascending over an army, represented by the tips of their lances and a banner. Other symbols show doves carrying olive branches. 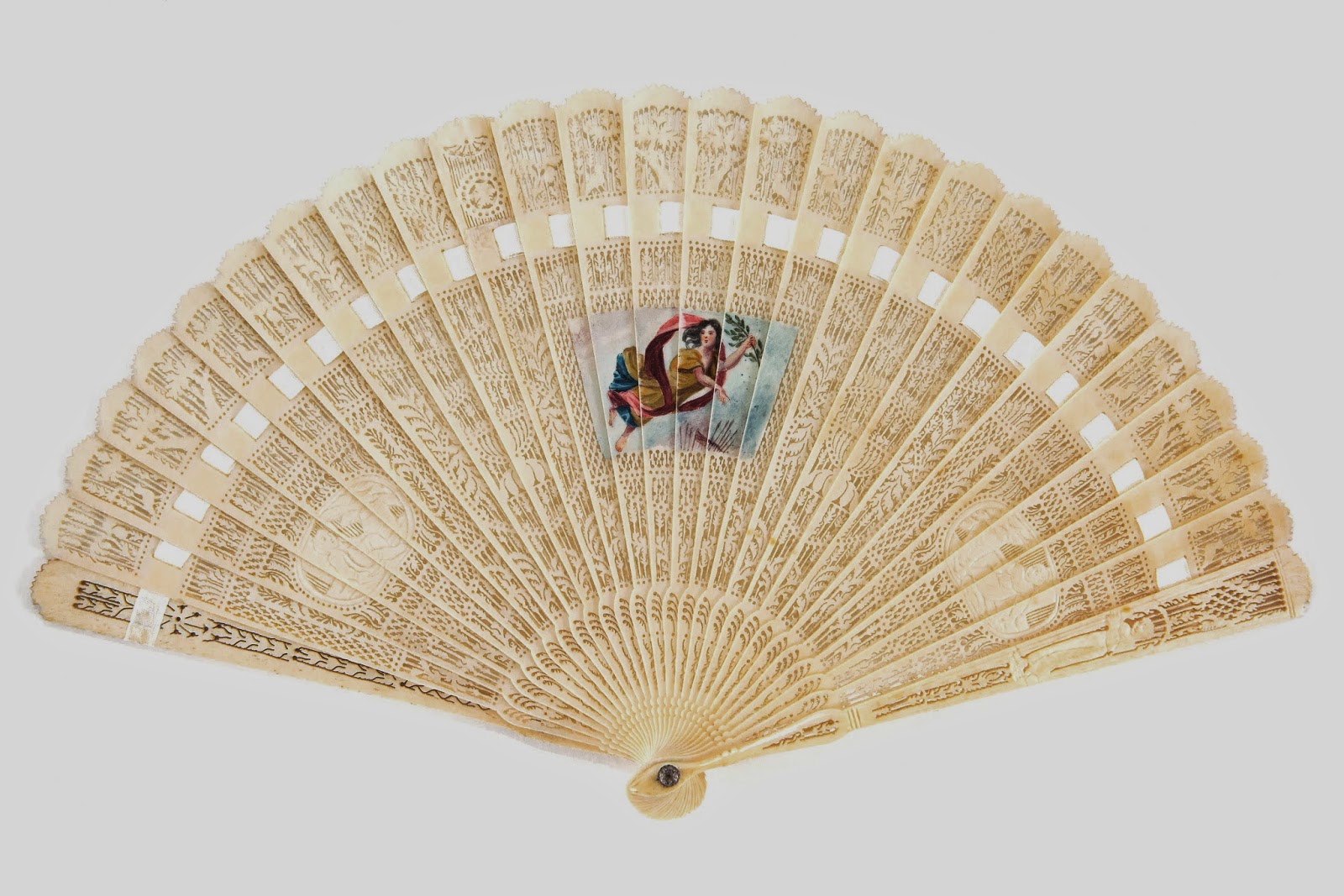 In April 1814, the great and the good began to descend on London for the Peace Celebrations, including Tsar Alexander 1st;, his sister, the Grand Duchess Catherine of Oldenburg; King Frederick of Prussia; and the popular General Blücher. The Prince Regent, naturally, wished to reap the credit for the magnificent show London was putting on. Unfortunately, he had forgotten that his estranged wife, Caroline of Brunswick, was related to the Russian royal guests. Embarrassingly, they kept asking after her. 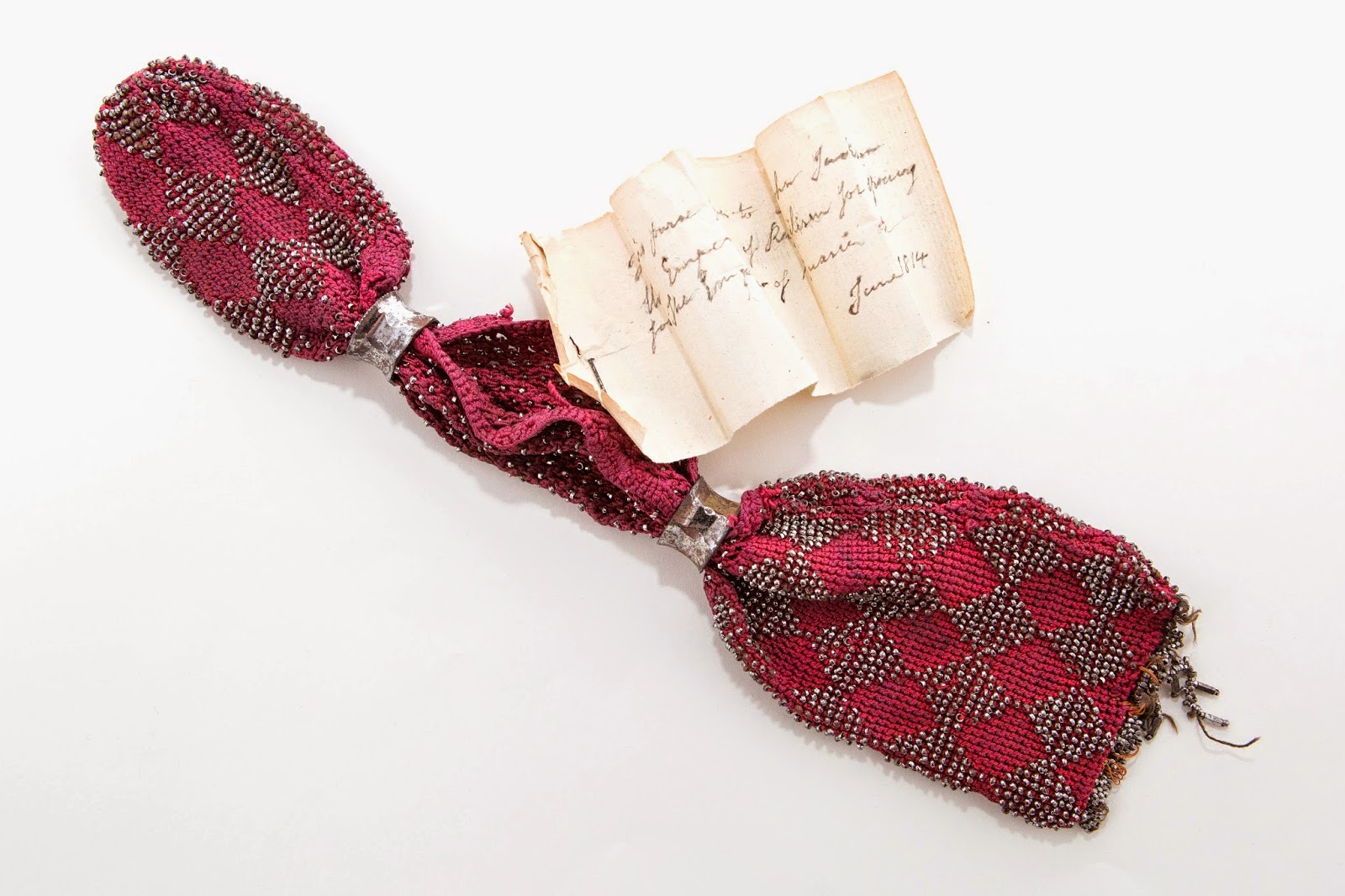 The Prince was anxious to show his royal guests round London. Amongst other attractions, Tsar Alexander visited the 'Emperor of Pugilism', ‘Gentleman’ John Jackson’s boxing academy for gentlemen at No 13, Bond Street. Here Alexander watched a special sparring bout. The exhibition has the net purse he awarded Jackson afterwards – suitably full of guineas, one hopes. 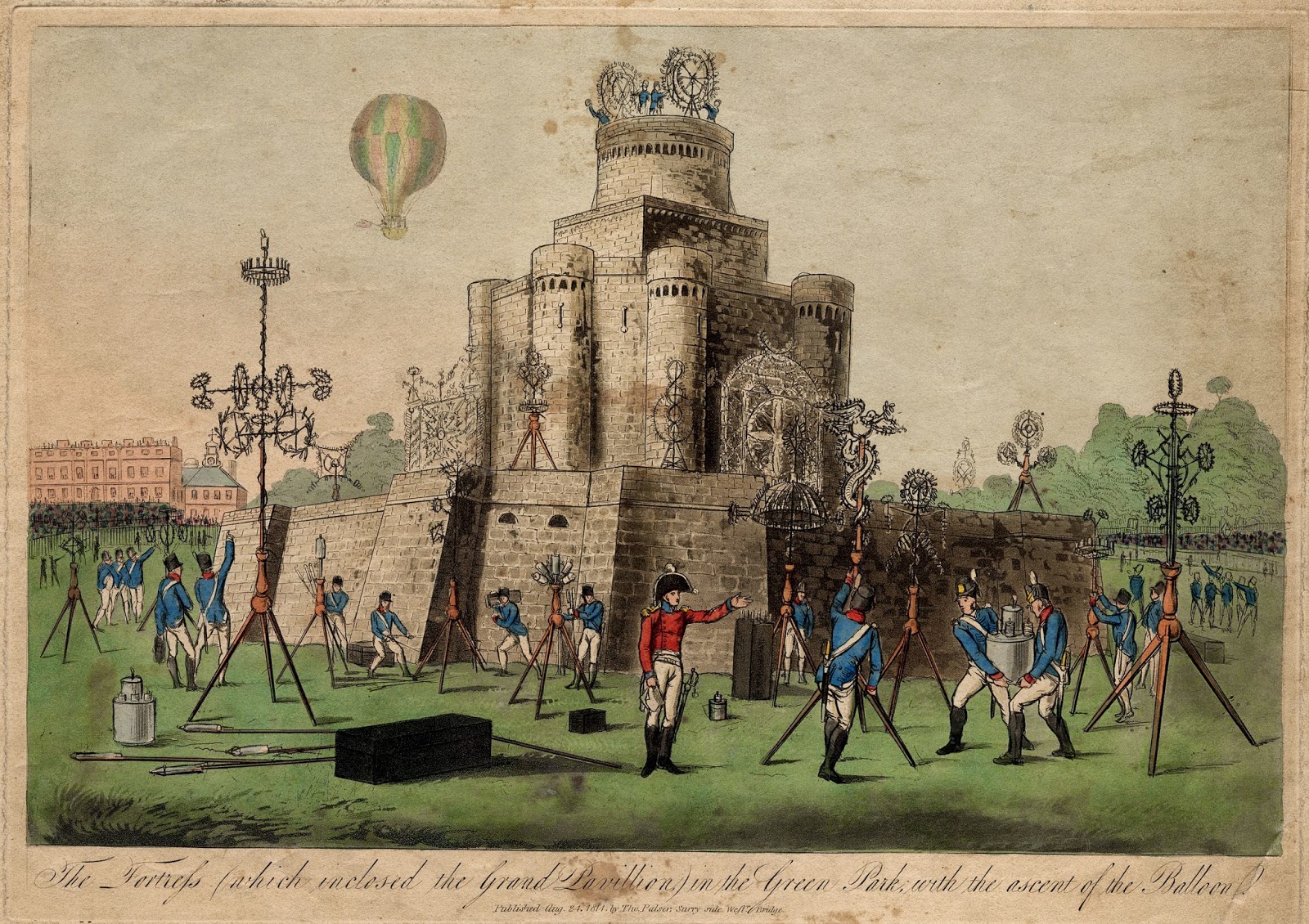 I particularly enjoyed the colourful prints of the attractions London had to offer. I loved the print of the destruction of the Castle of Discord, a wooden structure erected in Green Park opposite what is now Buckingham Palace. It was 130 ft high and 100 ft square. On August 1, it was subjected to a ‘cannonade’ simulating siege warfare. During the two hour ‘battle’, clouds of smoke obscured the castle, accompanied by some tremendous bangs. When the smoke finally cleared, behold! the castle had vanished and in its place stood the Temple of Concord, ‘rich, beautiful and resplendent’. The event finished with fireworks celebrating the return of Peace. 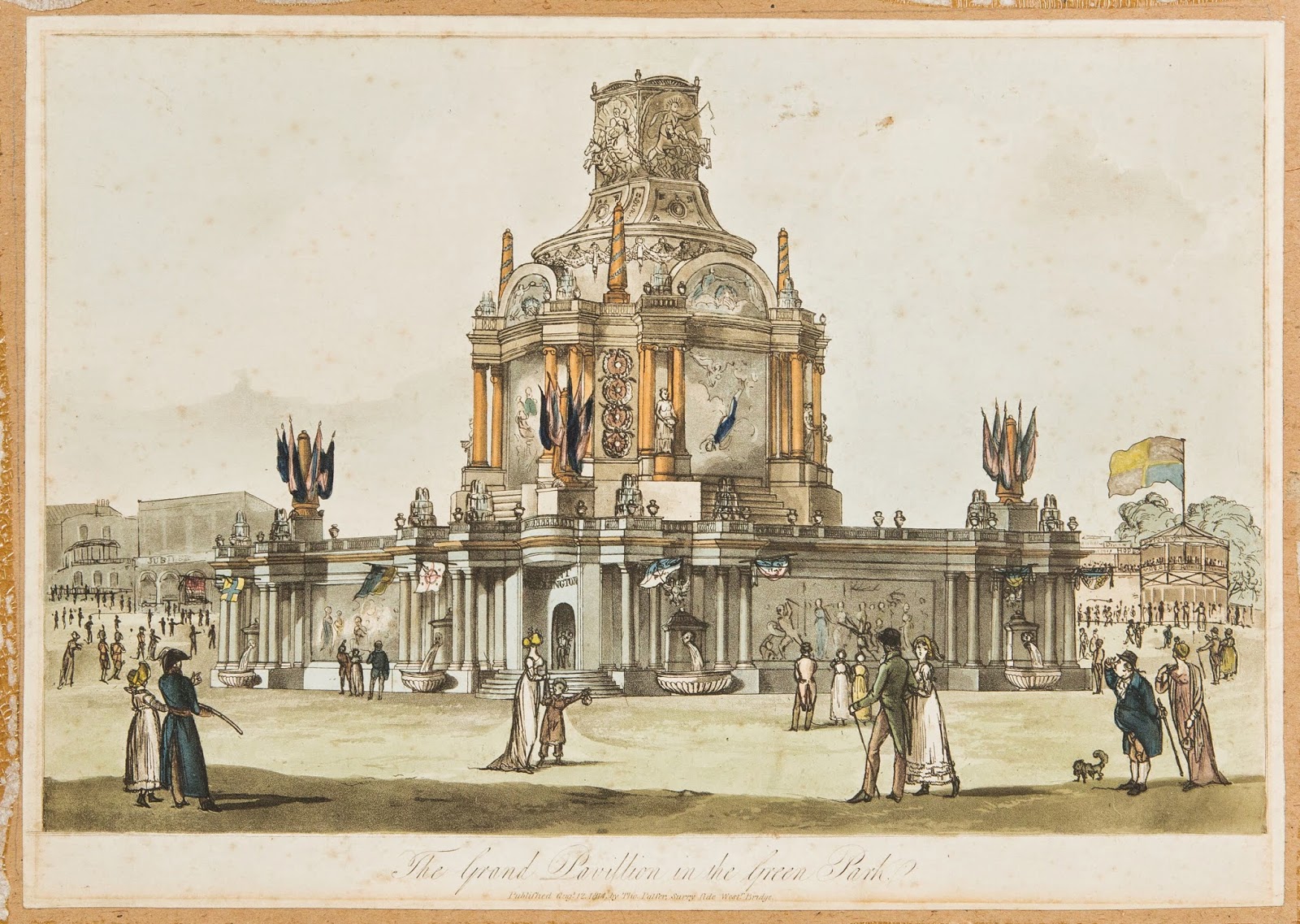 The writer Charles Lamb was there to enjoy the junketings. He wrote to Wordsworth, ‘The fireworks were splendid – the Rockets in clusters, in trees and all shapes, spreading about like stars in the making.’

I wish I’d been there to see it. Oh, to time travel! Fortunately, the illustrated exhibition catalogue includes interesting and informative essays by the curators, Alexander Rich, who has loaned many objects from his magnificent collection, and Dr Jerzy Kierkuć-Bielinski.

Photographs courtesy of: Alexander Rich, Private Collection. Photography: Lewis Bush
Peace Breaks Out: London and Paris in the Summer of 1814 is on at Sir John Soane’s Museum from 20th June – 13th September, 2014. It is free. www.soane.org

:
Posted by Historical Romance Author at 9:29 AM

Fascinating, Elizabeth, thank you for sharing that with us - wish I could get there!

What's great about the exhibition is that it's exactly our period.

There's also a fascinating section on the British in Paris - they went there in their thousands to see Napoleon's impressive building works, to sample French food and wine and to catch up on French fashion.

Did you know that British passports were just single sheets of paper with an official seal? I certainly didn't. I'd assumed they were like the pre-EU blue and gold ones. But the exhibition has the Duke of Wellington's passport, and that's all it is.

What a lovely post, Elizabeth! I didn't realise they went to such great lengths to celebrate and how intriguing that they weren't talking about victory, but peace!

Thanks Elizabeth for this post, I realise "what I didn't know I didn't know" about the Napoleonic wars. I was pleased to read, however, the people were celebrating peace rather than victory. I wish that notion was a little more pervasive inhumanity today. On a less altruistic note, those Coalport teacups were beautiful, style and grace was certainly hallmarks of the time.

Thank you for your comments, Christina. One catches glimpses of the 1814 Peace Celebrations in Georgette Heyer's A Civil Contract, where Adam and Jenny and their friends watch the procession of Allied Sovereigns from a window. Poor Jenny's enjoyment is marred by her being overcome by morning sickness and Adam learns that he is to be a father.

Thank you, Nikki, for dropping by.
I agree with you - and Christina - about celebrating Peace rather than Victory. 'Peace' is a much more inclusive term - at least it allows those who were beaten to be part of the celebrations. Just think what a difference it would make in the Middle East, for a start.