We all love a wedding and the first thing most people want to see and comment on is the bride’s dress.  Who can resist having an opinion on what she’s wearing?

Everyone has different tastes, and there are some mind-boggling creations that make their appearances in churches across the country – you do wonder sometimes what the poor grooms think when they see some of them come sailing down the aisle towards them!  (Provided, of course, they have followed the tradition of not being allowed to see it before the wedding, which I’ve always been told is very bad luck).  Most brides do look beautiful though, and who wouldn’t want to be at their best on such an important day?

At the moment, there is a wonderful exhibition on at the Victoria & Albert Museum in London showing wedding dresses and accessories from the late 1700’s onwards (Wedding Dresses 1775-2014).  A veritable feast for anyone who loves weddings, it is fascinating to see the progression of such gowns through the centuries.  Naturally they followed general fashion trends, but it is clear brides have always made an effort to wear the very best they could, spending as lavishly as their fathers permitted.  (There’s a selection of photos of some of the various gowns on the V & A’s Pinterest board here.)

To begin with, wedding dresses were just very nice gowns that could later be used again as ball gowns or for Sunday best.  Being white was not a prerequisite until Queen Victoria set a trend by wearing white at her own wedding in 1840, although young ladies often did wear white in any case.  The important thing seems to have been using a luxurious material and lots of special embellishments, such as exquisite embroidery and fine lace.  I loved seeing the various outfits on display and only wished I could have tried some of them on!

During World War II brides had to be extra inventive as dress materials were rationed.  Apparently upholstery/curtain material wasn’t though, so there were some lovely wedding dresses made out of what could also have passed for very pretty curtains!

The exhibition doesn’t just show traditional gowns, however.  There were some very different ones, such as a glorious purple creation worn by Dita Von Teese when she married singer Marilyn Manson.  I would have worn that to a ball myself, but as she is an unusual lady, it suited her to perfection.

Afterwards, I found myself looking through the family albums to see what the generations before me chose to wear and they all appear to have dresses in keeping with the fashions of their time.  My great-great-great-grandmother in her Sunday best in the 1850's, my grandmother in a 1930’s style gown and my mother in late 1950’s elegance.  As for me, I chose a Victorian style, having always loved the bustles and ‘leg-of-mutton’ sleeves so prevalent then.  Would I still choose that if I were to be married now?  Probably – I’m an old-fashioned kind of girl.

I was pleased to discover that myrtle has been included in royal wedding bouquets for quite some time as I wore a crown made of myrtle leaves, a tradition in my own family.  I'd love to hear from anyone else who followed an unusual family tradition for their wedding! 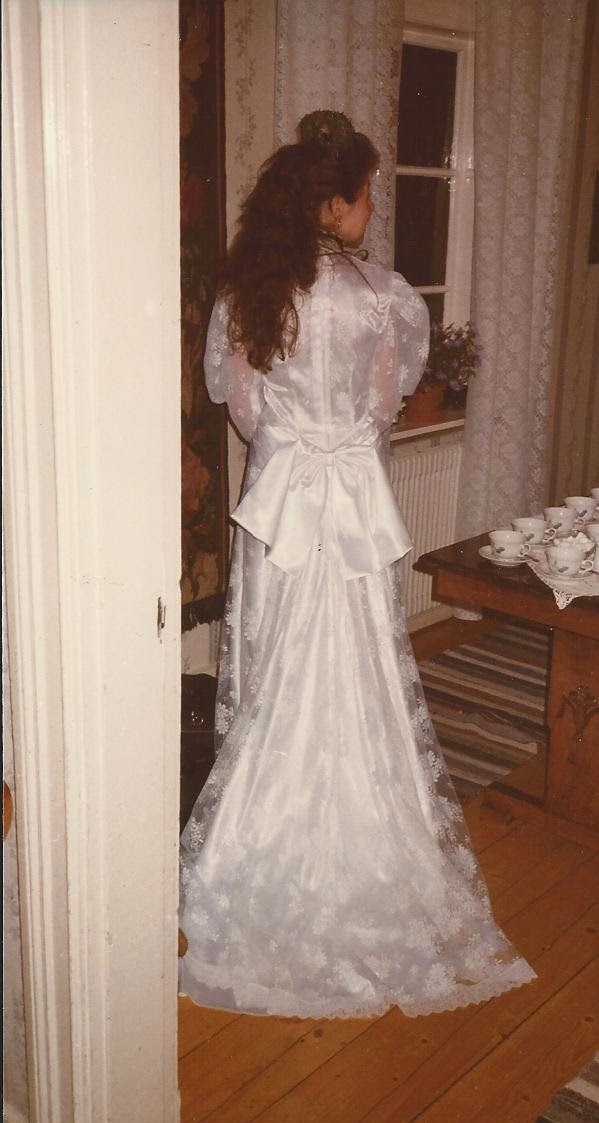 Posted by Historical Romance Author at 12:09 AM

It wasn't a family tradition but an English one that had to be explained to my new American husband and his family. We had a chimney sweep at our wedding for luck and they thought that was strange!

That sounds intriguing, Angela! I love hearing about different traditions. My in-laws had never heard of the myrtle either so I had to explain to them as well :-)

I just loved your wedding dress, Christina - so pretty and elegant, too. You look stunning.

Apparently, Queen Victoria got the myrtle for her wedding bouquet from Lambeth Palace (the Bishop of London's home) and then grew a myrtle bush from a cutting of it.

Every since, royal brides had had a sprig of it in their wedding bouquets.

In Roman times, the altar in a temple to the goddess Venus was decorated with myrtle which symbolizes love

Thank you, Elizabeth, it's good to know I was following such ancient traditions! My grandmother gave me a little myrtle plant and told me to keep it alive until I got married - I managed it, just, and it was used to make my crown :-)