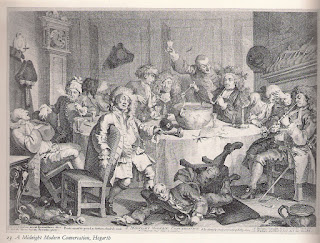 The dangers were known. Tobacco is listed in a late 18th Century treatise on poisons. According to the writer, there was evidence to suggest it was an active poison, “yet everyone knows that under the influence of habit it is used in immense quantities over the whole world as an article of luxury, without any bad effect having ever been clearly traced to it.”

Interestingly, the Royal Tobacco Factory in Seville set up by King Fernando VI and opening in 1770, processed snuff exclusively. It wasn't until the 1830s that they switched to making cigars.

This begs a number of questions. Where did British tobacco come from? And who processed it? We don't hear of 18th century British tobacco factories. Was snuff-taking a class thing? I'm thinking of all those pretty 17th and 18th porcelain snuff boxes.

A great post, Elizabeth. Tobacco and snuff have strong links with the west country (my childhood home). The cigarette and snuff manufacturer WD & HO Wills started in Bristol in the late 18th C with a payroll of 40 people. There is even a park in Bristol called Snuff Mills (although there is no evidence of a mill on that site, snuff was ground at a nearby mill on the River Frome in the 18th C and there is a legend of Snuffy Jack, a miller whose smock was always covered with snuff!)