The effect of the Spanish Peninsular war on the 19th century national consciousness was in some ways similar to our own feelings about battles on the Western Front during the First World War. Both were part of a much wider conflict; both were extremely bloody; and both had a huge effect back in Britain.


And, as always happens in war, stories emerged which caught the public imagination. One of these was the (true) story of the Maid of Saragossa. Readers of Georgette Heyer's The Spanish Bride will remember the scene when Juana intrepidly rides back to their previous lodgings to return a stolen Sevres bowl to its owner. 'Well done, Juana!' exclaims Colonel Barnard. 'You're a heroine. Why, the Maid of Saragossa is nothing to you!' I was reminded of all this when I saw the Scottish artist David Wilkie’s paintings of the Peninsular War in the Royal Collection at the Queen’s Gallery. I’d seen lots of contemporary prints of the war but not proper oil paintings, so I was interested to see these.


Wilkie visited Madrid in 1827 and, inspired by stories of Spanish guerrilla resistance, painted a series of pictures from the Spanish point of view. It is interesting that Wilkie chose the Spanish as his subjects. Perhaps he had seen too many returned British soldiers, wounded and out of work, begging on the streets for him to want to glamorize them. 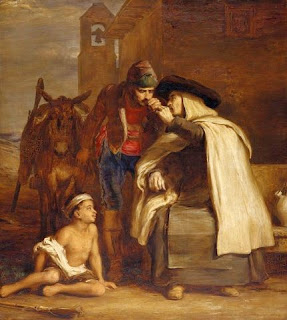 The Guerrilla’s Departure, painted in 1828, shows a Carmelite monk offering a guerrilla a light for his cigar. Tobacco smoking was ubiquitous, thanks to the Spanish colonies in Latin America, and Wilkie’s depiction of an ordinary working man smoking a cigar must have startled people back home. And was Wilkie, a son of the manse, also hinting at Roman Catholic intrigue with the monk offering the guerrilla a light? The church towers up behind them, and a ragged boy sits on the ground looking up at the scene. A laden donkey waits behind the man. 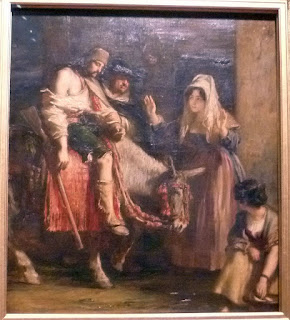 The Guerrilla’s Return by David Wilkie, 1828


The companion picture The Guerrilla’s Return (1828) shows the returning guerrilla. He arrives ragged and wounded, his left arm heavily bandaged, slouching on his exhausted donkey, his gun pointing downwards in a gesture of defeat. There is no church involvement here; this is personal. A young woman wearing a mantilla, perhaps his wife or sweetheart, holds up both hands in distress. Behind him we can just glimpse a man who has, perhaps, helped the guerrilla get home safely. In the front right of the canvas a kneeling girl looks up. 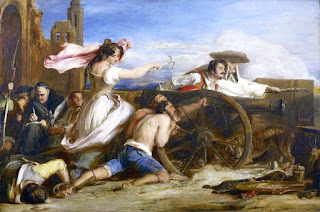 The Defence of Saragossa, by David Wilkie, 1828


Wilkie’s most famous picture The Defence of Saragossa (1828) takes as its subject the true story of Agustina Zaragoza, ‘the Maid of Saragossa’. In 1808, the French besieged Saragossa, a city which had not been attacked for four hundred and fifty years. The local guerrilla leader, Palafox, and the priest Boggiero, another hero of the resistance, seen conferring at the back, have managed to aim a gun at the French. They are ill-equipped and the ramparts are crumbling. How can they hold off the French with a few ancient cannons? They are heavily outnumbered. 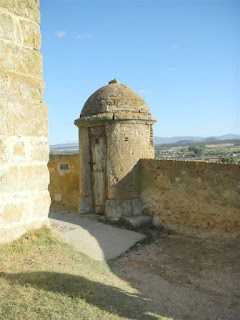 Turret on the ramparts of Ciudad Rodrigo


Behind the cannon, slumped on the floor, is the dying gunner Zaragoza. His wife, the twenty-two-year-old Agustina, has seen the French bayonets wreaking havoc on the defenders who are losing heart. Heroically, she runs forward, seizes a match and fires the gun at the French at point blank range, mowing them down. Inspired by her bravery, the fleeing Spanish rallied to her defence and, together, they beat off the French – at least for a while. 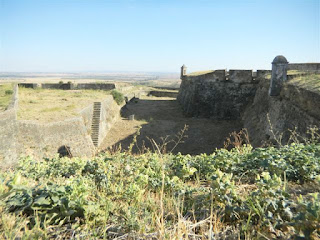 The ramparts of Santa Lucia.

Wilkie’s picture of this stirring event is a highly-dramatic one. The cannon is pushed up against the ramparts by four straining men. Agustina, in a swirl of white and pink drapery, holds the lighted taper aloft, ready to fire the cannon. Behind her, pressed against the ruined city wall, Palafox talks to Boggiero.


Agustina's story quickly spread. Byron depicts her in the first canto of Childe Harold's Pilgrimage. Here, she is inflamed by the sight of her lover mown down by the French.


Her lover sinks—she sheds no ill-timed tear;
Her chief is slain—she fills his fatal post;
Her fellows flee—she checks their base career;
The foe retires—she heads the sallying host:
Who can appease like her a lover's ghost?
The French, as Byron puts it, are: ‘Foiled by a woman's hand, before a battered wall.’ This extract comes from Canto 1, published in 1812 while the Peninsular War still raged.


After her heroism at Saragossa, Agustina became a rebel with the guerrilleros helping to harass the French and it's good to know that she lived to a ripe old age. Interestingly, Byron actually met Agustina some years after he wrote Childe Harold. 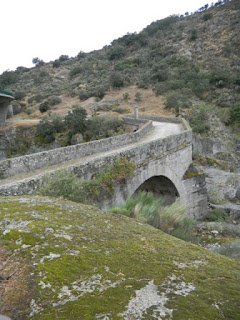 Bridge over the River Coa, she scene of fierce fighting

Many of us who write Regencies have sent our characters to the killing fields of the Peninsular War. Indeed, I’ve done so myself. So I thought you might enjoy a glimpse of a different take on the subject with David Wilkie’s vivid paintings.


If you’d like to see the paintings for yourself, they in the Scottish Artists 1750-1900: from Caledonia to the Continent exhibition at The Queen’s Gallery until 9 October, 2016


Photos: The Guerrilla’s Departure by David Wilkie and The Defence of Saragossa by David Wilkie courtesy of the Royal Collection Trust/© Her Majesty Queen Elizabeth II 2016

Other photos by Elizabeth Hawksley

Thank you, Elizabeth for another fascinating and insightful post. Like you I have used the Peninsular War as a background for some stories, and went to Corunna in January 2009 for the bicentenary of the battle there. This was very early in the war and akin to Dunkirk in WWII, with the British army being evacuated by ship. Sir John Moore, who led the troops and tied in the battle, is still revered there as a hero of Spanish Independence.

Wilkie's pictures are a great reminder of this long struggle against the French.

Thank you for your comment, Melinda/Sarah. You are right; Sir John Moore's valiant retreat to Corunna, his death and hurried burial is another of those stories everyone used to know: 'Not a sound was heard, not a funeral note' etc.

Lucky you, actually going to Corunna. I'm sure I remember you blogging about it, too.

I did - it was a wonderful experience, but next time I do a Pensinsular battlefield tour it will be in the summer, when the weather is better!

Fascinating, as always. I've read Harry Smith's biography, and much of the dialogue and what happens in The Spanish Bride comes from there. He was very explicit about his relationship with Juana. They never had children, she went with him everywhere in his career - he ended quite distinguished - and she outlived him, but they were devoted throughout their lives together. Such a romance! I love the story of the Maid of Saragossa, a new one to me.

Thanks, Elizabeth. I'm delighted you enjoyed my post. I, too, have read Harry Smith's autobiography - a very engaging read. I've always loved his and Juana's story. The National Portrait Gallery has a couple of lovely small portraits of them both, looking just as one imagines them: him whippet-thin, bony and alert; and she petite and lively.

I think I've seen copies of those portraits. Clearly Georgette Heyer had seen them too as her descriptions are so exact.