Costume Evidence and the Rice Portrait of Jane Austen 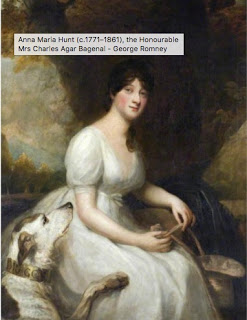 The first part of this post is taken from Ellie Bennett's blog on Jane Austen Portraits.
Ellie has done a lot of recent research on the background to the Rice Portrait of Jane Austen, which is fascinating! I hope you'll have a look.

'The earliest instance I can find of a puffed sleeve is in the portrait of Princess Augusta by Sir W Beechey 1802. Until 1800 sleeves are straight and tight.'
Madeleine Ginsberg, Senior Research Assistance (Costume) Department of Textiles, Victoria and Albert Museum, in a letter to John Kerslake at the National Portrait Museum dated 14 January 1975.

Madeleine Ginsberg presumably was unaware of this well known portrait by George Romney of Anna Maria Hunt. As I've said before, we now have the benefit of the internet, which was not available to experts in years gone by. Anna Maria Hunt sat seven times for Romney at his studio during 1791 and he completed the portrait over the next two years. The portrait is owned by the National Trust and is at Lanhydrock House, near Lostwithiel in Cornwall.

Mistakes happen of course, but how much more evidence needs to be provided before the V&A, the Courtauld Institute of Art and/or the National Portrait Gallery concede that the experts were mistaken to date the dress in the Rice Portrait to c1805? Are any of them prepared to announce that the dress could date to the late eighteenth century? If not then this begs the question - why are they so resistant? There is no doubt whatsoever about the dating of this portrait as Romney himself records the dates he painted it. The portrait was commissioned by Anna Maria Hunt's uncle and delivered to his home at Seymour Place, London on 20 June 1793.

Below is a blog I wrote some years ago on costume evidence for the Rice Portrait.

When examining the ‘Rice Portrait’ and costume evidence it must be noted that Jane Austen was a young adolescent in 1788, not yet thirteen, and therefore was still wearing children’s dress as she was not yet 'out'. The lower waisted dresses of adult fashion would not yet have been assumed. In a household where reading formed such a large part of the Austen family’s leisure time, it is highly probable that philosophers like Rousseau and Locke, not to mention family connections like Jane’s cousin Eliza de Feuillide who lived in France for a while, might influence the dress of their children.

Up until the 1750s the dress of children largely echoed that of their parents, but in the second half of the eighteenth century a new idea of ‘childhood’ was emerging, which influenced dress styles for children. The change has been said to have been brought about by the writings of Rousseau published in 1762, but he himself had been influenced by John Locke, the philosopher, who writing in 1688, condemned the then widespread practice of swaddling children, which robbed infants of their physical freedom. The theory was put forward that children should be allowed more freedom from constraint, which once established in infancy started to extend into the period of childhood, and was one taken up by the aristocracy, the gentry, and the middle classes in the second half of the eighteenth century.

Anne Buck (Dress in Eighteenth Century England) writes: The period between the age of three or four until the age of thirteen or fourteen acquired an identity of its own and its own style of dress…From 1760s the frock and sash began to take over completely. The age for continuing to wear it, in best dress as well as everyday dress, gradually rose, until by the 1780s it was being worn by girls in their early teens in all dress.

She further states: The significance of these new forms of dress for children is not only that they changed children’s dress, but that adult changes were foreshadowed in them and were apparent here before clearly emerging in adult dress.

The teen Jane Austen in the ‘Rice Portrait’ is clearly wearing the simple muslin dress that children and young adolescent girls had been wearing since the 1760s. It is virtually impossible in portraiture to find any two dresses that were exactly alike, as they were individual, hand-made garments, but dresses tended to be fuller before 1800, and usually showed the characteristic ‘banding’ that can be seen in Jane’s dress.

Lillian and Ted Williams who are experts in eighteenth century costume wrote about Jane’s dress in the ‘Rice Portrait’. Some of Lillian’s collection has been shown at the Metropolitan Museum in New York, and the Musée de la Mode and the Louvre in Paris.

Having carefully examined the actual portrait, as opposed to its reproduction, we find several elements that clearly suggest an eighteenth century dating starting in the late 1780s. We ourselves have owned several eighteenth century gowns similar to the one pictured in the Rice Portrait. In the Rice Portrait, we note the fullness of the cut of the dress with substantial distribution of its fabric around the bodice rather than trained in the rear in the later Empire style. Furthermore, the gauze gathered around the neckline – which is not discernible in many photographic reproductions – is consistent with late eighteenth century garniture. Finally, the shoes and certainly the parasol with its fringe of cut green silk are consistent with the same period. As far as dating is concerned, the width of the ribbon at the bodice is of no consequence one way or the other in our view.

The parasol Jane holds offers us another clue when dating the picture. Until around 1800, green was the main colour for the cover, perhaps a reddish complexion would appear paler in its shade, and surely would have been significant for Jane who is said to have disliked her pink complexion. After 1800, parasols seem generally to have become much smaller, the size and shape of a handkerchief, and a shorter shaft.

The print on the left, Beauty in Search of Knowledge, 1782, shows a lady carrying a green parasol, which looks very similar to the one that Jane is holding.
By 1809, the parasol on the right is more decorative and smaller.
Professor Marilyn Butler, a leading expert on Austen studies said in an article for the Times newspaper in 2003 that, 'There was a big fad for green umbrellas around 1788, at the time the portrait was painted. This reference does seem to be an emphatic memory.'

The 'emphatic memory' she is referring to is a reference to Sanditon, her final, unfinished work.
In the mean while we have the canvas awning, which gives us the most complete comfort within doors — &amp; you can get a Parasol at Whitby's for little Mary at any time, or a large Bonnet at Jebb's — And as for the Boys, I must say I would rather them run about in the sunshine than not. I am sure we agree my dear, in wishing our Boys to be as hardy as possible." –"Yes indeed, I am sure we do -  And I will get Mary a little parasol, which will make her as proud as can be. How grave she will walk about with it and fancy herself quite a little woman..." For more information on the Rice Portrait of Jane Austen please visit the website.Jane Odiwe
Posted by Jane Odiwe at 1:04 PM

Thank you for such an informative post. Oobe learning.