Inside the Dolls House

When I was a child I had the most enormous dolls house. If it had been scaled up it would have been about 3 times the size of the house I actually lived in and maybe that was one of the reasons I liked it; because it felt so grand and spacious, and there was room for all of us to have our own space and move about without falling over each other. Also I could furnish and decorate it as I wanted rather than having someone else deciding that my room would be painted violet and pink, whether I liked it or not. Then I could people it with the brothers and sisters that I didn’t have, and make up their stories and adventures. It was a fantasy world that encourages story telling.

The earliest miniature houses have been found inside Egyptian tombs dating from the 3rd millennium BC. These came complete with models of people – including servants – furniture, pets and other animals and were thought to have a religious purpose. The first European “baby houses” as they were called, date from the seventeenth century. In those days, though, they were not intended for children. In fact children were kept well away from them and forbidden to touch them for fear of breakage. They consisted of cabinet display cases made up of individual rooms and contained detailed fixtures and fitting to reflect the fashions and designs of the time. They were status symbols, created by master craftsmen and built for the rich. When they were completed and furnished they were worth the same amount as an actual house! No wonder people wouldn’t let their children touch them! 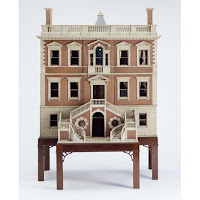 The Tate Baby House, made in 1760, is one of the most famous dollhouses. It is designed as a stone built Palladian mansion with a pedimented front door and a steps sweeping up to it. Behind the façade is a very luxurious world with rooms adorned with plaster and panelling, tiny candelabra, miniature china, silk embroidered chairs and portraits in golden frames. Once again there is a detailed peek in the world of downstairs as well as upstairs with kitchens groaning with pots and pans and servants’ quarters with less lavish furniture.

This upstairs downstairs division was important as a way of teaching children the way that the social divisions in a house should work. Whilst the lady of the house sat at her embroidery, the servants scuttled around making the beds.

Some people wanted their dolls house to be the fantasy world they would have liked to live in. Inth century castellated dolls house for £5 and set about refurbishing it. She employed local carpenters to make peg dolls to live in it, issuing them with instructions that the butler should have a paunch and the footman nicely-turned calves. She made a tiny feather duster for the maid using pheasant feathers. 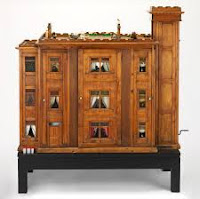 The boom in dolls house production came in the 1930s when they were mass produced. The company Lines Brothers made a “mock-Tudor” dolls house complete with plumbed in bath, flushing lavatory and vacuum cleaner. In contrast, Whiteladies House, created at the same time, was a modernist- style villa with dolls made from pipe-cleaners who frolicked by the swimming pool and lounged in the art deco sitting room.

A very famous dolls house is the one created in the early 1920s for Queen Mary who was an avid collector of miniatures. It was built by the architect Sir Edwin Lutyens who said of it: "Let us devise and design for all time, something which will enable future generations to see how a King and Queen lived in the twentieth century, and what authors, artists and craftsmen of note there were, during their reign",

Queen Mary’s dolls house is still on display at Windsor Castle and I saw it last time I went there. It’s huge, built to 1/12th scale, and measuring 102 inches by 58 inches, and is 60 inches tall. Great care went into sourcing the items for the house. The list of famous names contributors is endless - sewing machine from Singer; real Champagne from Veuve Clicquot and Mumm; clocks by Cartier; china by Doulton and even cars from Rolls Royce and Daimler. Sir Arthur Conan Doyle even wrote a short story (500 words) in a miniature book for the library. Exquisite furniture made from exotic woods fills the house - such as the large Victorian wardrobe veneered in amboyna wood, which can be seen in the Queens Suite. A bathroom floor laid in mother of pearl reflects the opulence the dolls house portrays. The house was finally completed in early 1924 and exhibited at the British Empire Exhibition, to great popular acclaim.

I’ve always wanted to see a dolls house designed to look like Ashdown House. It seems the perfect style for one, and as we can’t show visitors the rooms, how cute would it be to have a miniature version of them on display!
Posted by Nicola Cornick at 10:15 AM

Really interesting post, Nicola. And lucky you having, not only such a big doll's house, but such an elegant one, too!

I think a miniature Ashdown House sounds a wonderful idea. It could go in the Ashdown House café and children could play with it - though probably pieces would soon go missing.

I was very lucky indeed, Elizabeth. I realise that now. And I played with it for years and years so I have to credit it with contributing to my storytelling! I like the idea that the Ashdown House dolls house should be interactive rather than one where people were forbidden to touch.

I adore dolls houses, and I really envy you the one you had as a child. The Long Island Museum has miniature rooms that I love to look at.
It's probably just as well I don't have a dolls house myself, because I would spend all my time playing with it.

Thank you for your comment, Lillian. I think they have such a fascination for adults as well as children. So interesting!