A Brief History of Dunking Biscuits 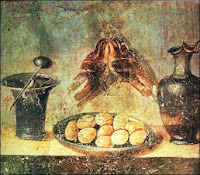 With the new series of the Great British Bake Off in full swing on the BBC there has already been controversy over whether or not it is appropriate to dunk Jaffa cakes in your tea or coffee. This led to a segment of the show giving the history of biscuit dunking, which, it turns out, is an ancient tradition. Apparently dunking, dipping or submerging a biscuit in a beverage releases more flavours by dissolving the sugar in it and also softening the texture. If you dunk a chocolate biscuit it is supposed to become even more chocolatey! But some people do not approve; in a survey 52% of people said they never dunked!

It was the Romans who started the tradition. They dunked their hard, unleavened wafers in wine in order to soften them. These wafers were known as “bis cotum” leading to the word biscuit. Modern day dunking, however, has it roots in the naval traditions of the 16th century when a flour and water mixture known as “hard tack” was baked and used for sailors’ rations. These incredibly unappealing biscuits were also known as “tooth dullers” and “molar breakers” making the need for dunking very clear. Hard tack was routine dipped in beer or brine (!) to soften it before it was even remotely edible. The fact that the one in the picture below has survived from the 19th century proves just how tough they must have been! 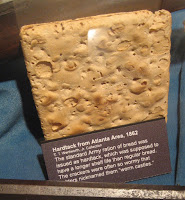 By the 17th century the basic biscuit recipe had been developed into something much nicer that tasted like sponge fingers. These were originally served at the end of the meal and dipped into wine or other alcoholic beverages. They are the ancestors of the trifle. From that time on, a number of biscuit recipes proliferated until in the Victorian period, biscuits, cake and tea were partaken mid-afternoon as the formal afternoon tea. Dunking, however, was discouraged. The Victorians disapproved of public biscuit dipping, feeling that it was something only to be done in the privacy of one’s own home.

Not everyone enjoys dunking and the choice of a dunking biscuit is still a very personal matter. So here is the all-important question. Do you dunk? And if so, what is your biscuit of choice?
Posted by Nicola Cornick at 4:56 PM

Walker's Shortbread! In sweetened hot tea, or cold milk! But, I must confess.......I am a secret dunker!

Thanks for admitting your dunking habits, Sandra! Your secret is safe with us. Shortbread in milk is something I haven't tried. Sounds delicious!

There are some really hard Italian biscuits which you have to dunk in a fortified wine to make at all edible. And they are then delicious!

I do occasionally dunk ginger biscuits in my morning coffee. You have to be quick, though, otherwise they dissolve into the coffee.

Elizabeth, the Italian biscuit idea sounds like a direct descendent of the Romans dipping their biscuits in wine, doesn't it. How fascinating! I have exactly the same problem with dunking; I can never quite get the timing right. Too much and it's slushy, not enough and the biscuit is still hard.

Sherinf, that sounds very tasty indeed. I love the idea of dipping a cinnamon rusk particularly!

Dunking is absolutely essential if you're having tea with biscuits. Digestives for me, though I used to dunk rich tea biscuits. Many a lump of soggy biscuit has ended up in the dregs of my tea cups. Perhaps it's fortunate I can't have biscuits now as I've had to cut sugar out almost completely. (I do cheat, though haven't succumbed to biscuit mania yet, probably only a matter of time!)

I never dunk biscuits but I will occasionally dunk my cheese or ham sandwiches in tea - delicious! (I think this may be a Swedish habit though as I've never come across anyone in England doing that :-D) Feel very sorry for those poor sailors, Nicola!

Yes, it's no wonder they had scurvy, is it, Christina. You wouldn't be looking forward to meal times - "hard tack again!" I haven't heard of dunking sandwiches in tea. Intriguing that it may be a Swedish tradition! Thank you for sharing.

This is what I heard the other day when I was leaving my gym.

Two girls were chilling near the basketball court at the back of my gym complex. They were watching a 3-on-3 game which abruptly ended when the biggest guy decided to jump straight up, knock the defender flat on his ass and dunk on him while he was laying sprawled on the blacktop.

That's when the blonde cheekily whispered this confession to her smoking-hot Asian friend in pink sweatpants:

"Nothing's hotter than a guy who can dunk."

And can you guess what the Asian hottie replied? She whimpered:

This got me thinking. I mean, for as long as I can remember I've always wanted to dunk. It's been a lifelong dream of mine, but I really had no idea girls found it hot. I guess it makes sense though since most people have this belief you need to be the most athletic dude around to be able to jump that high.

But the fact is that's just not true anymore.

Breakthrough research has surfaced recently about the exact 'levers' which allow people to jump ridiculously high. So naturally, 2 genius basketball players took this research and used it to transform regular guys who can't even touch the rim into dudes who can dunk with 2 hands every time and with ease.

One of these geniuses is a pro basketball player and the other is the world's highest dunker (I think it's safe to say they know what they're doing LOL) They're getting a ton of media hype these days and blowing up on Youtube so I thought I'd let you know about them.

And it's great timing too since they've just released all their crazy vert jump body hacks and techniques. They've been teaching people this stuff in secret for years but now it's available to the public in a badass program.

It's pretty crazy stuff so check it out.