The Four Flowers of Britain

Flowers are important to novelists; a young man will shyly offer a girl a rose; a child will bring a mother a posy on Mother's Day, we use flowers to symbolize emotion all the time. This post takes a step back to look at how heralds use flowers.

According to my book Heraldry: sources, symbols and meaning which was published in 1997 and covers everything one needs to know, from heraldic terminology and signs (e.g. the lion and the fleur-de-lys) to heraldic accessories, the UK’s emblem comprises the Tudor rose (England), the thistle (Scotland), and the shamrock (Ireland). 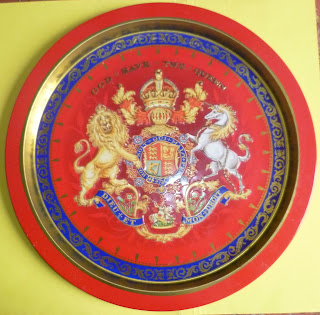 
The tin tray from Buckingham Palace illustrates this perfectly. In fact, it appears to view only England and Scotland as being of any real importance: the lion of England and the unicorn of Scotland together support the royal shield. Ireland is represented by the harp in one of the quarters and Wales does not feature at all. 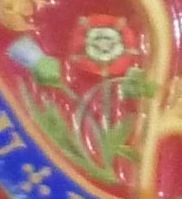 Detail of the three flower emblems


If we close in and look at the three flower emblems just above the Dieu et mon Droit, we have the Tudor rose, the thistle and the shamrock, but the Welsh leek doesn’t appear. The heraldic assumption is that Wales is part of England and has been since 1543. (I can feel the shade of my Welsh grandmother looking down disapprovingly.) And the shamrock represents both Northern Ireland as well as the Republic of Eire.


I’ve always felt that this was, not only unfair, but it doesn’t really represent how things are. Why shouldn’t the Welsh leek – or daffodil, if they prefer - be there? And, whilst I’m sure that every Irish heart loves the shamrock, why shouldn’t Northern Ireland have its own flower as well? 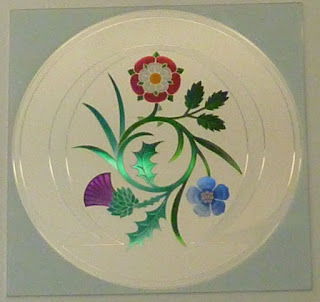 The new emblem of the UK


So, when I visited the Supreme Court last week, I was delighted to see that something has been done about it. The Supreme Court’s new official emblem was designed by Yvonne Holton, Herald Painter at the Court of Lord Lyon in Scotland, and you can’t get more official than that!


The emblem contains four heraldic elements. The Tudor rose, which is a five-petalled dog rose with stalk and leaves. The white rose of York is at the centre and the red rose of Lancaster is outside and it symbolizes the marriage of Elizabeth of York to King Henry VII which brought the Wars of the Roses to an end. 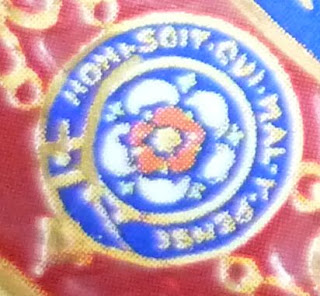 The reversed rose: it is now a Yorkist rose.


However, if we return to the Buckingham Palace tray for a moment, we note that, just outside the blue garter reading Honi soit qui mal y pense, there are seven small roses; but they are not Tudor roses, instead, they are reversed. The white rose of York is on the outside and the red rose of Lancaster is inside and smaller. The Queen, by birth, is a princess of the house of York as her parents were Duke and Duchess of York, and maybe this explains why the Tudor rose has been replaced. 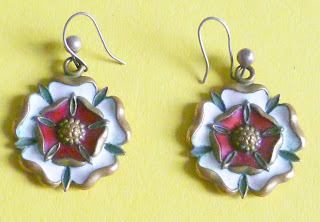 
I happen to own a pair of ear-rings with the same design. They belonged to my mother who was a staunch supporter of Richard III and lived in Yorkshire. 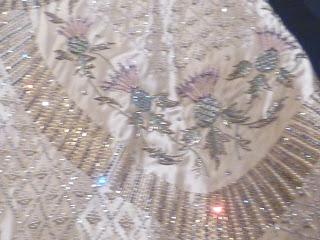 
Embroidered thistles were one of the symbolic flowers which decorated the Queen's coronation dress and represented not only Great Britain but also the Commonwealth.


The Scottish thistle is traditionally associated with a bare-footed invading Dane who yelled when he stepped on a thistle, thus warning the Scots of the enemy approach. It has to be said that there is no historical evidence for this but it makes a good story. However, a poem, The Thrissel and the Rose, by William of Dunbar to celebrate the marriage of Margaret Tudor and James IV of Scotland in 1503, shows that the association of the thistle with Scotland dated back to the early 16th century. 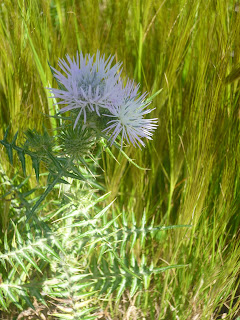 ﻿
This is not a Scottish thistle but it’s very decorative


Yvonne Holton has introduced a new emblem which adorns the Supreme Court; the five-petalled blue flax flower now represents Northern Ireland. Flax, from which linen is made, was once a major industry in Northern Ireland, and I think it sits very well with the other heraldic flowers. The philosopher Plato thought that odd numbers were more aesthetically pleasing than even ones, and the heraldic liking for the three-petalled fleur-de-lys and the five-petalled dog-rose seems to bear this out. They fill up the space artistically.

And, at last, the leek gets a look in with the fan of four leek leaves springing out between the rose and the thistle. Personally, I think it looks great – and my Welsh grandmother would have approved. According to a medieval legend, St David ordered his Welsh soldiers to wear leeks on their helmets to distinguish them from the Saxons.


Personally, I think that Yvonne Holton has produced an emblem which is artistically pleasing, traditional and yet it has a fresh modern look. Well done her.
Elizabeth Hawksley

So interesting. I quite like the new emblem, but why not the daffodil? I didn't know those were leek leaves. I think a daffodil would be more obvious. An actual leek perhaps not as aesthetically pleasing!! But I must say I do love the Tudor Rose and the Yorkist reversal is pretty good too.

I agree that the daffodil is more aesthetically pleasing than the leek but it's the leek that has been the emblem of Wales since Medieval times. It's even mentioned in Shakespeare (Henry IV Part I).

I, too, find the Tudor rose and its reversal very attractive. I wear the York rose (with the touch of Tudor)earrings and people often comment. I hope to visit Richard III's tomb in Leicester cathedral at some point, and I'll certainly wear them for that.

J have earring envy! As a staunch Ricardian I must track some down. What more appropriate than wearing them to visit his tomb? This is such an interesting blog piece, thank you, Elizabeth.

Bless you, Nicola. Not that I want you to feel envious of my earrings, but it's nice to know that another Ricardian appreciates them!