It’s exciting to be releasing yet another new Regency in the winter anthology continuing the Regency Romantics series put out by myself and five fellow friends and novelists. I have a soft spot for this one. A Winter’s Madcap Escapade is a fast-paced romp and I’m hoping it will entertain readers as much as I enjoyed writing it.
The premise was all I had to begin with, an idea floating around for some years. A gentleman re-enters his coach to find a young damsel within who insists – at pistol point – that he take her to the next posting stage. By the time I came to write it I had a ready-made hero in Alexander Dymond who makes his first appearance as the friend and cousin of the hero Justin in the second story (A Chance Gone By) of my new Brides by Chance series.
As for Appoline, she leapt onto my stage like a crazy little whirlwind without warning or pause for thought. She was a delight to write and her antics drive Alex up the wall as he informs her several times. But all is not sweetness and light. There are skeletons in cupboards, heartache and a good deal of darkness before the dawning of an impossible happy ending.
We join our hero and heroine just after their journey together begins:

“I’m not running away. I am going to London to see the lawyer.”
Alexander began to feel a touch light-headed. What had he got himself mixed up in? Why had he let the wench persuade him into this?
“I must have taken leave of my senses,” he muttered. A tiny giggle drew his attention. He cocked an eyebrow. “Find that amusing? Suppose I should count myself fortunate if I don’t come out of this with a charge of kidnapping.”
“Oh, it will not come to that, sir. I shall slip out at the next stage and no one will know I was ever in your carriage.”
For a moment, Alexander allowed himself the luxury of relief, but it was short-lived. Under no circumstances could he let the silly chit go off on her own. She’d come to grief in no time. Best to keep this reflection to himself for the moment. Didn’t want her doing something idiotic, like trying to jump from the coach. She’d shown herself capable of any sort of crazy conduct.
“What’s your name?”
A wary look entered her face. “Why should I tell you?”
“Why shouldn’t you? Considering the way you were willing to trust yourself to a strange man, can’t see why you’d balk at telling me your name.”
“I didn’t trust you! Besides, I had the pistol.”
“Which wasn’t loaded, birdwit.”
“How dare you call me birdwit?”
“What else am I to call you if I don’t know your name?”
“Well, it’s Apple.”
Alexander let out a snorting laugh. “Wish you won’t be so stubborn! Apple? No one’s called Apple.”
Her eyes flashed. “I am called Apple. It’s my papa’s fault. He began it when I was a child and it stuck.”
“Oh, it’s a pet name? What’s your real name?”
“It’s Appoline, if you must know. Appoline Greenaway.”
“Ah, I see. Makes a bit more sense now.” He doffed his hat and made a little bow. “Miss Greenaway. I’m Dymond. Alexander Dymond. M’friends call me Alex.”
She inclined her head in a manner that struck him as a touch imperious. He tried not to laugh. A little out of place for a girl of her class. Though was it?
“What’s your station, Miss Greenaway? I mean, who was your father?”
“John Greenaway.”
“That tells me a lot.”
Miss Greenaway huffed a little. “I don’t see why I should tell you anything.”
“Suit yourself. Only I can’t help you if I don’t know the half of it.”
She eyed him with suspicion. “Why should you wish to help me?”
“Well, if that don’t beat all! Didn’t you throw yourself on my mercy?”
“No, I did not. I merely asked you to convey me a little way in your coach. That does not give you the right to demand the history of my life.”
“First off, you didn’t ask me. You ordered me at gunpoint. Second, if you don’t stop trying to run rings round me, I’ll set you down in the middle of the countryside and leave you there.”
Miss Greenaway’s obstinate little chin came up. “No, you won’t. You are not that sort of man.”
*** 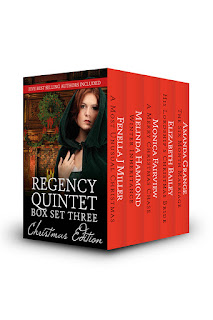 There are five more sparkling Regencies to enjoy in this anthology, which is available now from now from Amazon UK  and Amazon US as well as all other Amazons. Keep checking the blog over the coming weeks to find out more about the rest of the stories  included in the set.

This is terrific stuff, Elizabeth! I was hooked immediately. I just love the sparky Appoline.