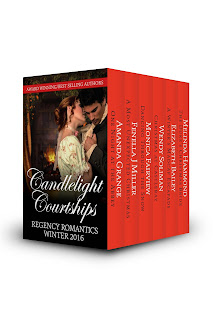 It’s always exciting to have a new release and Candlelight Courtships, our Regency Romantics Winter 2016 set, is just out. This 6-book set set contains some old books and some new ones to entertain you over the autumn and winter months. We decided to call it a winter set this year, instead of a Christmas set, because not all of the books are about Christmas (although some of them are). My contribution, One Night at the Abbey, begins in October when autumn is slowly giving way to winter. It was previously published as Carisbrooke Abbey by Robert Hale Ltd. It’s a bit different from my earlier Regency romances because it has something of a Gothic feel to it, with the heroine going to work at a remote abbey. She has a job close to my heart because she is in charge of Lord Carisbrooke’s extensive library. This causes some friction, because when Lord Carisbrooke appointed her, he thought she was Mr Wentworth, and not Miss Wentworth!

The mix-up occurs because he appoints her by letter, and once he discovers the truth he wants to send her packing – except it is a very wild night and not even the mysterious Lord Carisbrooke can bring himself to turn Hilary out in the storm! Their first meeting takes place in the woods. Hilary is walking to the abbey when the storm brings a tree crashing down. It catches her a glancing blow and Lord Carisbrooke finds her with her foot trapped beneath it. As Hilary tries to free her foot, she hears a noise and this is what happens next:

Looking up, she gasped. A large, bulky shape was standing there. It was huge and shaggy, some kind of wild animal . . . a bear, rearing up on its hind legs! Shocked, she tried to struggle free . . . until another flash of lightning lit the scene, and she saw that the dark shape was not a bear at all, but a man. She could be forgiven for her mistake, for he was tall and broad, and with his grizzled hair he looked wild and savage.
‘Hell’s teeth!’ he ground out. ‘What are you doing in the wood?’
His ungracious words dispelled her fear and stung her to make a sharp retort. ‘That is none of your business.’
‘Oh, isn’t it?’ he growled.
‘No, it is not.’ Focusing on her anger, which helped her to take her mind from the pain, she went on. ‘So if you would just help me to free my foot —’
‘Oh! So that is my business,’ he returned churlishly.
‘You are right, it isn’t,’ she said, biting her lip. ‘Very well, then, if you are not going to make yourself useful, you had better be on your way.’
‘Harumph!’
The sound came out gruffly, but another flash of lightning tore open the sky, and to Hilary’s surprise she saw that there was a glint of respect in his eye. Her spirited retort had done her no harm with him and she was grateful. She had spoken without thinking, and it would have been disastrous if he had taken her at her word.
He turned his attention away from her and fixed it on the tree. After examining it for a few minutes he bent down and took hold of the crown. Then, flexing his huge shoulders, he lifted it from the ground.
Hilary seized the moment and pulled her foot free. She ought to thank him, but he had helped her with such a bad grace that she was reluctant to do so. Good breeding got the better of her baser instincts, however, and she muttered an unwilling, ‘Thank you.’
‘Don’t mention it.’
And why was he so bad-tempered? she wondered, hearing his gruff tone. It wasn’t as though he had spent the last hour tramping through the rain, trying to find an elusive abbey, and had then been knocked down by a tree!
But whatever the reason, it was not her concern. She had other things to worry about.
She turned her attention back to her foot. It was difficult to see how badly it had been injured. The lightning had retreated and the stormy day was once more dark, but her ankle was sore and it was starting to throb.
The bear-like man crouched down in front of her. Before she could stop him, he lifted her foot onto his knee. She winced, expecting him to hurt her, but his touch was strangely gentle. Though his hands were large they possessed a delicacy she had not expected. His fingers were long and broad, and they were weather beaten, showing the brown hue of a man who spent much of his life out of doors. As he ran his hands over her kid boot, searching it deftly for a sign of any broken bones, to her surprise she felt her foot began to tingle. It was an unusual sensation, and yet pleasant. Better still, it seemed to blot out the pain.

***
The set is available now from Amazon UK  and  Amazon US as well as all other Amazons. Check out the blog over the coming weeks to find out more about the other books included in the set.

I loved this scene! I do like a feisty heroine. And the description of the wild and windy night and the bear-like apparition's sudden appearance is terrific.

Thanks, Elizabeth. I wanted to create a different kind of hero for this book and I loved writing about the irascible Lord Carisbrooke, who is more of a Byronic hero than most of my other heroes.