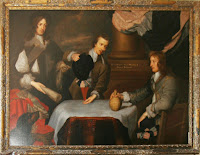 I’ve always found paintings fascinating and inspirational, wanting to know the stories behind the faces and to understand the symbolism. Recently my curiosity took me to a fine art dealer’s studio in London where I had a wonderful time deciphering the tale behind a picture that has always intrigued me.

The painting, known as The Triple Dobson Portrait, hangs at Ashdown House. It dates from the period of the English Civil War. The names of the sitters, Prince Rupert of the Rhine, his brother Prince Maurice and the Duke of Richmond are helpfully painted onto it. It definitely has a story to tell. Prince Rupert’s scarlet cloak lies discarded over a chair; his faithful dog looks on, and in his hand is a document of some description. One of his companions is dipping a cockade into a glass of red wine. The royal colours and those of Prince Rupert, the grey and the black, are swathed around the pillar and on the cockade.

The Ashdown picture is unfinished. There is no glass for the wine and a lot of the details of the clothing in particular have not been completed. That is one of the mysteries about the painting: Why was it never finished?

In London I saw a finished version of the same picture hanging on the wall in the fine art studio.The 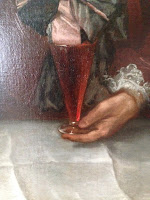 difference took my breath away. Where the Ashdown painting was a draft, this was simply stunning, huge, beautifully detailed and so fine. The lace was exquisite. There were even wrinkles in the table cloth! It made “our” painting seem rather clumsy! My expert told me that this finished version had a full provenance and they knew its entire story. It was painted in the winter of 1645-1646, in Oxford, by William Dobson, court painter to King Charles I. It is indeed Prince Rupert in the portrait, but not Prince Maurice or the Duke of Richmond. The soldier on the right, Colonel John Russell, had commissioned it and it had been in his family ever since. The identity of the man in the middle was still in question.

The painting tells the story of a moment in time. After Rupert had given up Bristol to the Parliamentarians he quarrelled badly with his uncle Charles I who thought he had relinquished the city too easily. Rupert was court-martialled, and though he was cleared, unpleasant rumours hung over his loyalty and that of his troops. 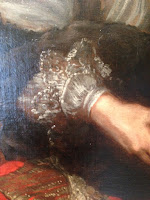 The portrait is a refutation of those claims. The scroll in Rupert’s hand is the ruling of the court martial, clearing him of all accusations. The combination of his own colours and those of the King underline his loyalty, as does the glass of wine, which is to be raised in a loyal toast, and of course there is the dog – the ultimate symbol of steadfastness.

So if this portrait had been painted for John Russell, who had commissioned our copy? My expert pointed out to me something that should have been obvious but that I hadn’t appreciated before, that since a triple portrait featured three people there were usually three copies of it. This raised the intriguing possibility of a third version, the whereabouts currently unknown. But since we already have sufficient of a puzzle with our own version, that one will have to wait!

Here we come to the heart of our mystery. The most likely suggestion is that our portrait is the one 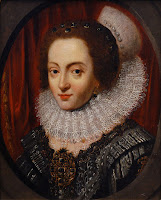 intended for Prince Rupert. His connection to Ashdown House, via his mother Elizabeth, the Winter Queen, and as a friend of Lord Craven makes this plausible. Again, we can guess at why the portrait was never completed. It was painted in wartime, the fortunes of the Royalists were falling apart and there simply wasn’t time. As for the names, they were painted on – incorrectly - in the Victorian period.

Until we can find proof of the painting’s history we cannot be sure. But I do love a good mystery and I feel the plot of another timeslip story shaping up!

As a footnote, today is the 397th anniversary of the coronation of Elizabeth of Bohemia, whom I wrote about in House of Shadows. Here’s a toast to Her Majesty!
Posted by Nicola Cornick at 10:13 AM

What an absolutely wonderful story, Nicola. Ashdown House should get Philip Mould (of Fake or Fortune)onto it. I can't wait for Part 2.

Thank you, Elizabeth! It would be great to get Fake or Fortune involved and see if we could find out more.

Gosh - as good as any novel, Nicola! So intriguing, thank you for sharing it with us.

Do let us know if (when) you discover more.

Thanks, Melinda! It's a cracking story, isn't it. Love a good mystery, especially one involving Prince Rupert!

I grew up in Bristol, and always had a soft spot for Rupert... very dashing sort of guy!

Indeed he was. (Fluttery sigh!) Probably a nightmare to be in a relationship with but very charming all the same!