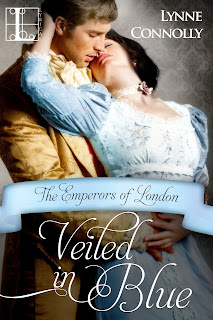 Veiled In Blue is the next to last Emperors of London book, and one readers have been waiting for. Julius’s story!
In all the series I write there is one character readers write to me about the most, and there are two in Emperors of London. One is Julius Caesar, Lord Winterton, the son and heir of the Duke of Kirkburton. He’s at loggerheads with his unfeeling mother, trying to keep his sister Helena out of her clutches. She has set the future roles of all her children, and Helena is to be the helpmeet.
But Julius finds a distraction. He wants to check on one of the children of the Old Pretender, a young woman adopted by a country vicar and his wife. Because he doesn’t want to make waves, he goes as plain Mr. Vernon.
And it’s there that Julius meets his fate, in the little village of Appleton. He desires her, then he falls for her, but he makes a fatal mistake that could cost him the love of his life.
Writing this story was a delight, not least because I got to write an aristocrat-in-disguise story. Julius is forced to face discomforts he doesn’t usually encounter in his normal life. People don’t bow and scrape to him, and they don’t immediately fuss over him. Being Julius, this comes as a relief, rather than a problem. He looks on the visit as a holiday.
Until danger strikes. Of course danger strikes. It wouldn’t be any fun if it didn’t!
Unlike most of the children, Eve knows she is a daughter of the son of King James II. She doesn’t really believe it, and being a practical woman, she doesn’t care very much. It doesn’t affect her day to day life in this, to her, boring part of England. She has suitors, one in particular, but when Julius bursts into her life, everything goes to hell in a handbasket.
One of the sources for this book was Fielding’s “Tom Jones,” although there isn’t anyone quite as vulgar as the Squire. I’d loved to have done my version, but there wasn’t a place for him. But Tom starts his journey in a rural community very much like the one in Tom Jones. People who knew their places living their lives and occasionally indulging in scandal. The other thing I couldn’t put in the book was the number of spankings! Children were regularly punished, and it was very much “spare the rod and spoil the child” that prevailed. Putting that into a modern book would lead to accusations of cruelty. In one of the earlier Emperors books, I put how the father of the heroine chastised her in that way. The readers didn’t like it, and hated the father far more than I’d planned!
So when I write the books I do have to bear the modern reader in mind. What was perfectly acceptable then isn’t any more. But I try to make my books authentic. It’s problems like that that make the writing process fascinating. I won’t write anachronisms, like the aristocratic lady wandering around London on her own or refusing to marry on principle, but I do temper the stories to suit the modern reader.
You can get Veiled In Blue here:
Buy the Book and read an extract:
Publisher - Kensington Books
Amazon USA
Amazon UK
iTunes
Kobo
Barnes and Noble Nook
Google Play Store
Posted by lynneconnolly at 9:00 AM