A love affair with names

From my earliest writings, I’ve had a fascination with names. I collect them, make lists, and pore through them, relishing the sounds they make and imagining the characters they will be – hopefully one day.
Alisaundre, Odierna, Laureola, Hierytha, Pertesia, Mariamne, Jesmaine
How they roll around the tongue!

Most of them are still waiting, not yet crossed out. They are too obscure to use, outlandish even some of them: Salathiel, Baldassare, Theldry, Gerente, Jurdi, Odinel, Sagard, Teague, Jolenta, Truffeni. Also out of period, unsuitable for the time. 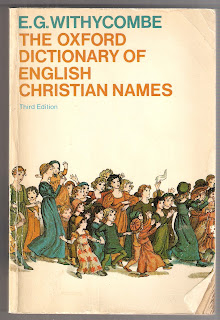 My bible for historicals is The Oxford Dictionary of English Christian Names by E.G. Withycombe, of which I now have a second copy by my bed. The other lives above the PC with the writing related books.

The great thing about Withycombe is the references to when the names were fashionable and which level of society used them. You also get nicknames, variants and surnames derived from the name, plus versions in other languages.

Elizabeth, for example, has a whole page of history. We learn its origin from Hebrew Elisheba, and how it travelled across Russia and Europe to England via France (where it became Isabel) and only became hugely popular after the Tudors – for obvious reasons. It has more diminutives than any other name: Betsy, Betty, Bess, Eliza, Beth, Lizzy, Tetty, Tetsy, and a host more in other languages. But no surnames, strangely enough. 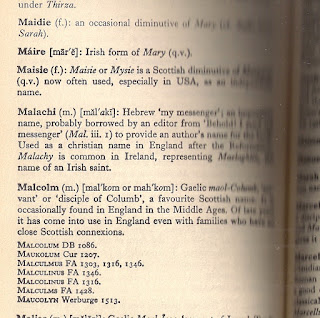 Withycombe makes for fascinating reading. I can get lost in there for hours. It’s my first port of call when I’m looking for names for a new hero or heroine. I tend to flick through first, avoiding letters recently used so you don’t get George immediately followed by Gerard in the next book. If a particular name doesn’t jump out at me, I have to go more in depth and pick up a version of the name within the definition.
Dowsabel from Dulcie perhaps. Gatty from Gertrude. Meriel from Muriel. Fillida from Phyllis.

There are endless possibilities; you get spoilt for choice. Although, as most writers discover, characters can be recalcitrant about names. They refuse to have the one you give them and insist on something else. Annoying, but it’s no use fighting it. You just have to give in and accept she’s going to be Caroline and not your preference of Cleome or Chloe.

I have other books of names, but Withycombe is my inspiration. I must have combed it a hundred times, building my pleasurable lists. You can see how well-worn it is.

One list I derived from Italian tombstones on a visit to Florence. I’ve only used one name from it, but I still love them.
Iole Lovisoni, Aida Lorenzini, Ofelia Zocchi-Lumachi, Dionisia Corti-Guidicci, Euridice Casini, Ezio Mangianti.
Can’t you just see the medieval pageant of gorgeously-clad veiled women passing before your eyes?

My French list has yielded names I have been able to use, but others are still waiting.
Hilaire, Gaspard, Eulalie, Hippolyte, Ignace, Venise, Celine. 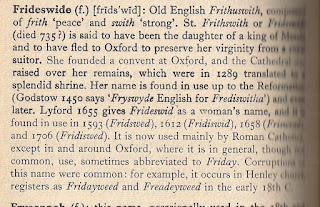 Other lists refer to names for contemporary novels, like one I have of gemstone names, many in actual use. Have you known Pearl, Amber, Opal, Sapphire, Jade, Emerald, Ruby or Garnet? You’d have to love a heroine named Topaze, Amethyst or Marcasite, wouldn’t you?

When it comes to lesser characters and I need a name fast, I go to the lists for specific centuries in The Guinness Book of Names by Leslie Dunkling. This one is also my go-to book for quick surnames when I run out of the lists I’ve made of usable place names I take from maps. Lists again, see. Can’t stop making them. 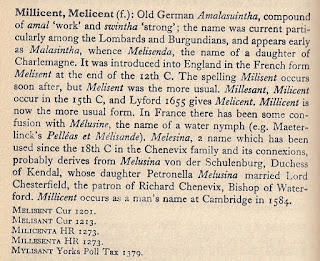 Just to prove there is a point to my obsession, here are some of the more obscure names picked out of the lists that I have managed to use, though not necessarily for the main characters.

Frideswid (the heroine from Friday Dreaming). The entry shown above for this states that Friday is a diminutive.
Berinthia (the cousin come companion/duenna in Fated Folly)
Hebe (the aunt from Seventh Heaven)
Melusine (my French/English heroine from Mademoiselle at Arms). You can see the arguable French version under the Millicent entry, which is where I got it..

Mairenni and Peneli (the gypsy matriarch and her son from An Angel’s Touch)
Maidie (the heroine Lady Mary Hope from Misfit Maid). The first illustration shows this was a diminutive for Mary.

And to prove the usefulness of Withycombe, my current Brides by Chance series features these adorable lovelies:
Isolde, Marianne, Edith, Apple (from Appoline), Lily (from Liliana), Delia, Chloe, and in the work in progress, Felicity. Waiting in the wings, we have twins Hetty (from Henrietta) and Sylve (from Sylvestre, the feminine form of Silvester).

I can’t think where you get the idea that the naming of names is my delight and my passion!

Posted by Elizabeth Bailey at 10:23 AM

I make lists from reference books I read about the fourteenth century and a couple of websites which list names from manorial rolls or other fourteenth-century documents. Naming characters is fun and tiresome at the same time.

Aha, so I'm not the only one! Sounds an interesting source for names, April.

Like you, Liz, I take surnames from maps but I also make notes (= lists, of course) of interesting place names as we drive around the country. That's how the hero of Marrying the Major ended up with the surname Stratton. I also created a whole fleet of villages, like Stratton Magna. Such fun. Also wonderful displacement activity.

Yes, it's good fun and you can call it work too, Joanna!

I loved this post, Elizabeth. I, too, have a much-loved and much-used copy of E. G. Withycombe's 'The Oxford Dictionary of English Christian Names'. And, like Joanna, I tend to use place names as surnames - as did Georgette Heyer.

Yes, I do that too. Scouring maps for a name when I need one! I recognise so many of GH's names when I trawl through maps, especially in my local area of Sussex.

It has been said that every bettor needs to see this,

Watch this or stop betting on sports...