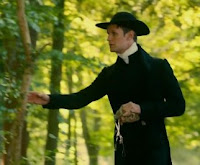 Doctor Foster went to Gloucester
In a shower of rain;
He stepped in a puddle,
Right up to his middle,
And never went there again.


I used to recite this well known rhyme to my children and thought nothing of it, except that it was plain silly, puddles were never that deep.  Now, however I am not so sure…..

Walking my dog around the Yorkshire hills this winter I have noticed a change in some of the bridleways, which has given me more food for thought about how people travelled in the past.  This is a picture of what is locally known as Stony Lane.  It used to be like this for most of its length, and as you can see from the close-up, there are lots of small stones packed together to make a good surface. 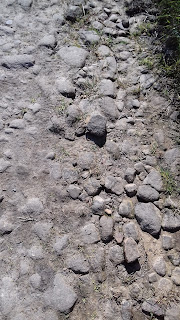 Local historians tell me this bridleway forms part of an ancient trackway stretching across the country and possibly providing a route between religious houses from Europe to Ireland.  It formed part of the old packhorse trails that used to crisscross the country and when the mills were built in the valleys during the Industrial Revolution, many of the workers lived on the hills and the quickest way to work was straight down, cutting across the old tracks.  There is still evidence of this around, if you look closely. This opening in the stone wall now has a modern wooden stile, but you can see the way the stone is worn away from the hundreds of boots or clogs that made the daily journey to and from the mills. 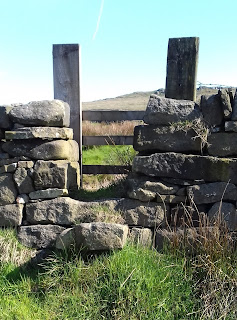 Just for interest I have added a picture of the stile on the south side of the lane (a stone one, built in a more modern wall). The fenceposts in the picture below show the line of the track that leads the quarter of a mile or so to the valley bottom. Nice to walk on a sunny morning, but imagine having to toil back up in the winter, after a hard day's work. 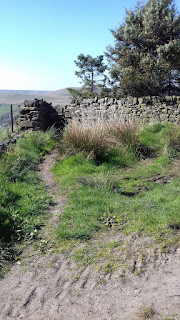 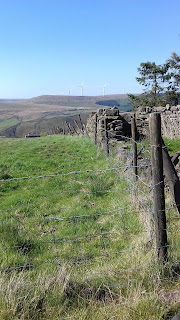 So back to Doctor Foster. Part of Stony Lane now is just mud. Packed hard, it is fine in dry weather, but very slippery and uneven when wet. Where the stones have gone I have no idea, but if they are buried, they are a long way down. This next picture shows it on a relatively dry day, and you can see the darker patches where the mud is still wet. 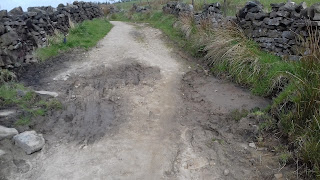 It is thick and gloopy and can come up at least over your ankles if you stand on the dark patch to the left of the picture. However, if you put your foot in the patch on the right, it would keep on going, as a friend recently discovered, up to the knee!  The last time I pushed my stick into that patch I stopped at 18" (45cms) but I hadn't reached stone, and  with the continuing rains it might go deeper still. The picture below shows it in more detail. 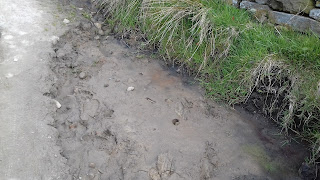 I am sure someone knows the reason why there are these deep pockets of muddy gloop – possibly a different type of soil, maybe the constant pounding of feet, I don't know. What I do know is that in the past when hard-packed stones were the only form of road surface, this type of problem must have occurred all the time. Local landowners were responsible for maintaining their section of the highway, some better than others, and in periods of bad weather the road surface could be washed away just as it has in the next picture. A couple of seasons without repair and a highway could easily become almost impassible by a carriage. Unfortunately these photos cannot do justice to just how uneven and rutted this is. 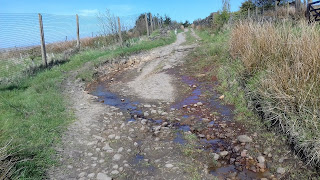 As another little aside, I am told that there used to be a small ale house beside the lane here, where the track widens.  The farmer who now owns the field has found stones from an old building there, so at least the weary travellers could find some refreshment during their journey. 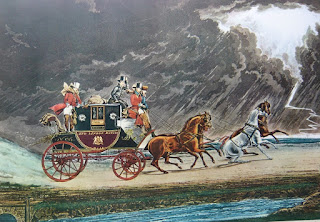 Until the end of the 18th century travelling by coach must have been a slow and uncomfortable business, bouncing along on badly made roads and possibly even breaking a wheel in a deep rut.  And as for Doctor Foster, I can well imagine that if the muddy tracks around here are anything to go by, it is quite possible that he stood in a puddle up to his thighs, at least.

I have used carriage accidents and bad roads in many of my books in the past, and in the latest story I have just written a scene in a lane very much like Stony Lane for an encounter between my main characters. Complete with mud! 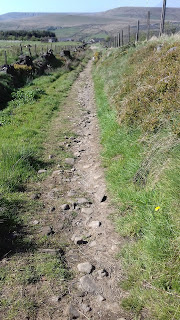 
Posted by Melinda Hammond/Sarah Mallory at 12:30 AM

I wrote an entire thesis largely about paving and maintaining Elizabethan streets, so am always interested to read about pre-modern roads - really enjoyed your history of Stony Lane, especially the bit about the strategically placed ale house! Looks beautiful country too. Like you, I spend a lot of time when out walking speculating about who walked along some of these tracks. I'm not sure the main highways were much better, and they must have been nightmare journeys for coach travellers until John Macadam .

A most interesting post, Sarah/Melinda. It's all too easy to forget just how difficult travelling must have been two hundred years ago. The turnpike roads were probably OK, but minor roads must often have been as muddy and uneven as your photos show.

Thank you for your comments, Elizabeth and Pam. My imagination goes into overdrive when I go out walking! There are some lovely old fords around here, too, linking the smaller villages. Some of them are cobbled, some just stony (and lethal to anything but tractors or 4x4s with good ground clearance). I love walking these lanes, and I even spotted a fossil on one of the stones - that was after a rainstorm, so the patter showed up quite clearly. I have a photo of it somewhere.....

Regarding the history of Stony Lane, Pam, when we first moved here I was told about the man who rode along the bridleways dressed as a roundhead from the Civil War. I never saw him myself, but I believe he gave walkers quite a shock!

Thanks again for dropping by.