Dunkirk - thoughts from those who were actually there.

As the release of the much awaited film, Dunkirk, is due next week I thought I would share some of the personal stories, from the men who were actually there, that I've come across in my research.
The RAF were erroneously accused of abandoning the army to be bombed by the Luftwaffe. In fact the opposite was true. If they hadn't flown non-stop protecting the beaches behind Dunkirk the miracle of evacuation wouldn't have taken place. They might not have been seen by the soldiers but they were there doing their job.
The man in charge of the Luftwaffe convinced Hitler to let his pilots destroy The British Expeditionary Force so the advance of the tanks and soldiers was halted to allow him time to do so. History tells us that this was possibly the decision that changed the course of World War II.
Squadron Leader Al Dere 54 Squadron, said they were flying for fourteen days non-stop. He did thirty-seven hours in ten days. They just kept flying. They had no reserve pilots. 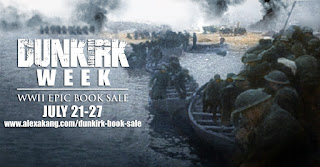 Flying officer Geoffrey Page, 56 Squadron. He states that his operations over Dunkirk were in two main categories. The first was that they had to do a fighter sweep – they would fly all the way round behind beaches and try and intercept any German aircraft coming up to attack the soldiers on the ground. The other role was to escort the Blenheims when they went to bomb targets related to the evacuation from Dunkirk. He reports that their ground crews got into fights in local pubs because the soldiers would say, "where were you?" And the ground crews knew very well what we'd done over there.
Bernt Engelmann, Luftwaffe pilot.
He reports that on the dunes north of Dunkirk there were thousands of light and heavy weapons abandoned on the sand along with munition crates, field kitchens, scattered cans of rations and many wrecks of British army trucks. He writes that if the German tanks and Stukas and Navy had managed to surround the British here, shooting most them, and taking the rest prisoner, then England wouldn't have had any trained soldiers left. Instead, the British seemed to have rescued them all – and a lot of Frenchmen too. Adolf can say goodbye to his blitzkrieg against England.
Lady Chichester who was a civilian volunteer work in Hampshire talked of her husband's experience. "He was in the guards, in the retreat, and was picked up by private yacht with a lot of other Welsh Guardsmen and brought back to England. They had to abandon everything they possessed, except their guns – even their sleeping blanks, their clothes and their equipment. They just got on board any ship that was able to take back twinge. At the time, knowing the French given up the fight, the Germans all along the coast of France, we really did think that any day they would be invading."

To coincide with the release of the film Dunkirk there will be a 50+ author book sale (all with one book reduced to $ 0. 99/£0.99) of historical fiction all in some way connected to Dunkirk. There is also a raffle, to give away and a variety of other things – including lists of the most popular World War II films. 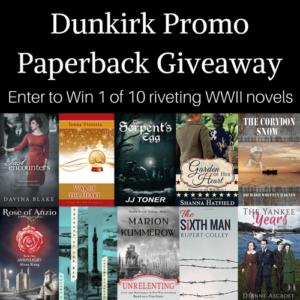 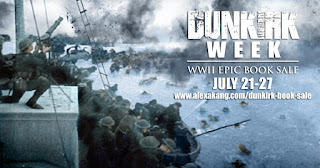 Posted by Fenella J Miller at 7:43 AM

Thank you for this most interesting post, Fenella. I know there are other ways of looking at this episode in our national history and that there were serious blunders, but, all this same, for the endurance and heroism of the men down on the beaches, up in the skies and in the little boats struggling to rescue them, this story cannot be beaten.

Elizabeth, I write about the RAF a lot in my WW2 books and feel they were wrongly accused of avoiding combat.