I’ve been obsessed recently with the fate of minorities in eighteenth century Britain. Mostly gays, because I’ve been writing and promoting Sinless. I discovered so much. It wasn’t a happy fate, unless you were rich and powerful enough to ignore the rules. Even then, if you fell from power, the locusts would descend.
Pre 1969, sexuality was used to bribe, coerce and blackmail people. Even more after the strictures of the Victorians led to an intractible moral code that drove anyone not deemed as “normal” to the burgeoning underground. Not just “sodomites” but the promiscuous, people with unusual preferences, and the rebels.
It isn’t necessarily a threat to security, being gay (I know it’s an anachronistic term but so is “homosexual” – I had to take the plunge and use the terms they did at the time!), but being forced into hiding a secret causes a vulnerability. Molly houses welcomed all gays, but also transvestites who were not necessarily gay. However, for much of the eighteenth century men were unashamed peacocks. As we now know, they are not all the same, but they were considered so for a long time. The famous Chevalier d’Eon, who dressed in women’s clothes publicly, wasn’t definitely outed as male until after his death. He was a spy, a man who dressed in the clothes of both sexes, took part in duels and created a fuss wherever he went. He must have been remarkable.
Closer to the 1750s, when Sinless is set, was the even more remarkable John Augustus Harvey. He had a wife who adored him, and with whom he had a large family – eight children. He was a politician at the highest level. John Hervey was a baron, but never inherited his father’s title of Earl of Bristol, as he predeceased his father. He was one of twenty children. Oh yes, twenty. He was an ally of the Prince of Wales, but after falling out with him over a woman, switches sides to Walpole. He was Lord Privy Seal, and a member of the Privy Council. However he also had a male lover, Stephen, to whom he was devoted. They had to share him. There was plenty to go around. All this was conducted at the highest level of society. Hervey also had a pernickety diet, in an age of gluttony, he dressed flamboyantly, made no attempt to conceal his preferences. He was probably the lover of Princess Caroline, the daughter of George II, who was said to have mourned him for the rest of his life.
A literary squabble arose with Alexander Pope, who was jealous of Hervey’s friendship of Lady Mary Montagu, who once declared that there were three sexes – men, women and Herveys.
I have his biography, and one thing that puzzled me was, where did he find the time? He had eight children, a male lover, and at least one other female lover, he was a hard working and intelligent politician, he was an important figure in the literary world. Honestly, if I’d written a book about a character based on Hervey, nobody would have believed me!
So I wrote about Darius instead. I do love him, the man with an essential humanity, who cared deeply about his family and the person he falls in love with. If he was cut open, Darius would have “iintegrity” written all the way through him. I am very fortunate that my publisher let me write his story, in the middle of a series about purely heterosexual relationships. I wrote him as a foil to his twin Valentinian, but he gained his own fans, including me, as we all got to know him better. Would I have loved John Hervey as much? I doubt it. 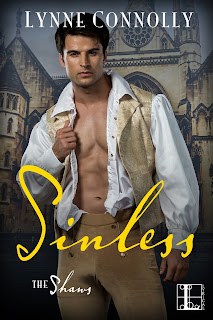 Lord Darius Shaw has never been in love before. But when he renews his acquaintance with lawyer Andrew Graham in a raid on a molly house, where men meet men for forbidden pleasure, they discover mutual feelings as deep as they are dangerous. For while society will turn a blind eye to an aristocrat’s transgressions, Andrew has far more at stake. The son of city merchants, Andrew has a disastrous marriage in his past, and a young daughter to support. He could lose his livelihood, his reputation and even his life—and drag Darius down with him.

Darius and Andrew’s only choice is to deny the true nature of their relationship. But when an enemy Italian spy threatens their secret—and their futures—the two set out to catch him. And in the process they are forced to face their desires—and make a life-changing decision.

You might be eligible for a complimentary $1,000 Amazon Gift Card.