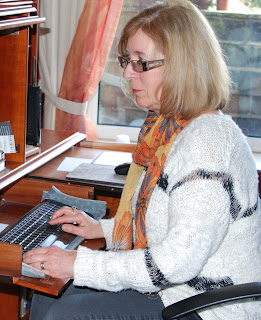 I have a new Sarah Mallory published in November – Beauty and the Brooding Lord. And yes, it has a Beauty and the Beast theme! It features Serena Russington, the spirited sister of Russ, my hero in The Ton's Most Notorious Rake. She thinks a rake would make an interesting husband and goes searching for one – with quite disastrous results!

Here is a short excerpt. To set the scene: Serena has slipped away into the garden for a secret assignation with Sir Timothy Forsbrook, whom she knows to be a rake…. 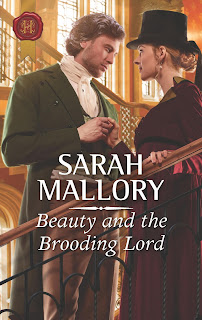 
… in the moonlight the paths gleamed pale silver and the roses themselves ranged from near black to pale blue-grey. But if the flowers had lost their colour, their scent was enhanced and Serena breathed in the heady fragrance as she made her way along the path, but when she reached the turn in the path she was aware of something else besides rose scent in the night air. A faint hint of tobacco.


Ahead she saw an arbour surrounded by climbing roses and her heart gave a little skip. There, in the shadows, was the unmistakable figure of a man. His upper body was hidden, but his crossed legs in their light-coloured knee breeches and white silk stockings were plainly visible in the gloom. Serena had expected to find her swain pacing up and down, impatient for her to arrive, but here he was, sitting at his ease. She quashed the faint ripple of disappointment and hurried up to him, smiling.


‘Forgive me, I was delayed. I—’ She broke off with a gasp as she peered into the shadows. ‘You are not Sir Timothy.’


The reply was an irritable growl. The figure rose from the seat and Serena took a hasty step backwards. She realised now that he was nothing like Sir Timothy Forsbrook. This man was much larger, for a start, although his upper body was so broad that he did not look overly tall. Where Sir Timothy’s glossy black locks were carefully styled about his head, the stranger’s hair was lighter and too long to be fashionable. And as he stepped out of the arbour she thought he was not at all handsome. In the moonlight his craggy face appeared harsh, as if he was scowling at her.


He towered over her and she took another step away.


‘Excuse me—’ She would have walked on but his next words stopped her.


‘There was a fellow here, but he has gone.’


‘Aye. He had the impudence to suggest I should vacate the seat, so I kicked him out.’


His great shoulders lifted in a shrug. ‘No. Mere jostling. He retreated rather than have my fist spoil his face.’


She sucked in a long, indignant breath. ‘That is disgraceful behaviour. Quite boorish.’


‘I suppose you would have preferred me to give way. But why should I? I came out here to enjoy a cigarillo in peace. You two will have to find some other place for your lovemaking.’


Knowing she was in the wrong did nothing for Serena’s temper. She drew herself up and said angrily, ‘You are odiously rude!’


‘If it’s soft words you want I suggest you go and find your lover.’


He grinned, his teeth gleaming white in the moonlight. ‘No need to be coy on my account, madam.’


He folded his arms and looked down at her. ‘Yes?’


For a moment she glared at him, her hands closing into fists as she tried to control her rage. It would be most undignified to rip up at him. Resisting the urge to stamp her foot, she turned and swept off, muttering angrily under her breath all the insults she would like to hurl at the odious creature.


I must say, things go from bad to worse for Serena after that but she discovers that the ideal man for her is very different from what she imagined!  Beauty and the Brooding Lord was great fun to write, so I hope you like it, too.
And if you haven't yet read The Ton's Most Notorious Rake, it is currently 99p for the Kindle version! 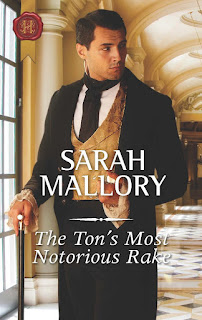 Moonlight, silver-grey scented roses, an imposing man and a spirited lady - what more could one ask?

Thank you, Elizabeth! AND it has a happy ending (of course!)

In this information age, it is vital to have access to the right info and I'm glad I found your Weblink. This is absolutely beautiful content and I especially love your design. Just like you, we also educate people on HOW TO BECOME A PROFESSIONAL NURSE , so you can always check us out for credible content. I will make sure to bookmark this weblink to come back for more real time updates. WICKR//: yungreddgotit

Impressive！Thanks for giving me an idea to my site. Ill be following your works from now on. Hoping for your success.Everyone loves what you guys are up too. This type of clever work and coverage! Keep up the great works guys I’ve incorporated you guys to my own blogroll. Feel free to visit my website;

I accidentally searched and visited your site. I still saw several posts during my visit, but the text was neat and readable. I will quote this post and 한국야동
post it on my blog. Would you like to visit my blog later? Feel free to visit my website;

Wonderful items from you, man. I’ve have in mind your stuff previous to and you’re just extremely excellent. I actually like what you’ve acquired here, really like what you’re saying and the way in which through which you assert it. You’re making it entertaining and you still care for to keep it smart. I cant wait to read far more from you. That is actually a terrific web site. Feel free to visit my website; 국산야동

Hello there, You have performed an excellent job. I will definitely dig it and personally suggest to my friends. I’m confident they will be benefited from this web site. Feel free to visit my website;


Hard to ignore such an amazing article like this. You really amazed me with your writing talent. Thank for you shared again. Feel free to visit my website;
일본야동