Last week I visited the magnificent Kenwood House, built in the 1760s by Robert Adam for the Earl of Mansfield. Whilst there, it struck me that what novelists need is not an in depth knowledge of a stately home’s architectural highlights but a record of some of the everyday objects which a heroine might come across. 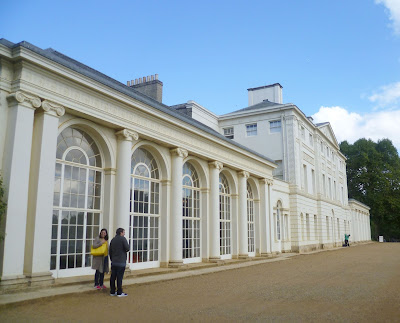 Kenwood House. The Orangery is on the left. In summer, the orange trees in tubs are moved outside.

Step forward Rosa Forbes, twenty-three, thin, badly-dressed and a bit prim, but with hidden possibilities, given the chance. Rosa’s widowed father thinks of nothing but hunting (in winter) and gambling (the rest of the year), he scarcely notices Rosa. When he dies, the estate is sold to pay off his debts and Rosa, in desperation, writes to her unknown great-aunt for help. Two weeks later, Rosa finds herself at the magnificent Manderville Court with only one shabby valise to her name. 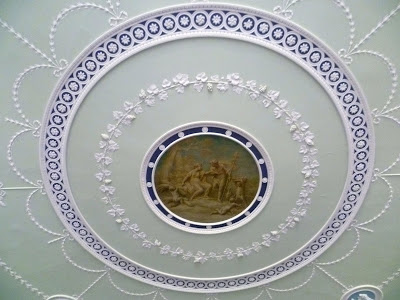 Rosa is entranced by the roundel and early the following morning she sneaks down and lies on the floor to admire it better. To her embarrassment, Lord Ludovic comes in unexpectedly and nearly trips over her.

'For Heaven's sake, Miss Forbes! What on earth are you doing down there?'

It is not a good start.

Mercury, the messenger god. What message does he have for Rosa?

As if being caught lying on the floor wasn't bad enough, she then catches sight of a plaster statue of a nude Greek god standing in a nonchalant way in an alcove – he has nothing on except for a fig leaf – and, ludicrously, a hat. She doesn’t know where to look. Lord L. is amused by her confusion, she can see. She flees. 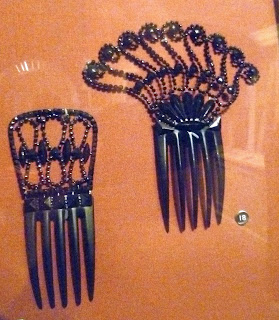 Two new guests arrive, the supremely poised - and wealthy - Honourable Constantia Pomeroy, and her alarming mother. Rosa learns from her great-aunt that an engagement between Lord Ludovic and Miss Pomeroy is imminent.

They deserve each other, thinks Rosa.

'Really, Miss Forbes,' sniffs Miss Pomeroy, the first evening after her arrival, 'why are you peering so closely at that mantelpiece? I thought for a moment that you were a housemaid dusting it!'  She titters. 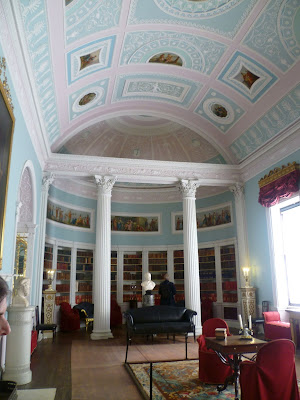 There's one room Rosa really loves - the Library. She forgets to be shocked by the ceiling panel of Hercules choosing between Glory and the Passions. All she can do is breathe, ‘Oh!’ Those colours! The pale blue and pink set off the dark red and gold of the books so well. She walks around, entranced 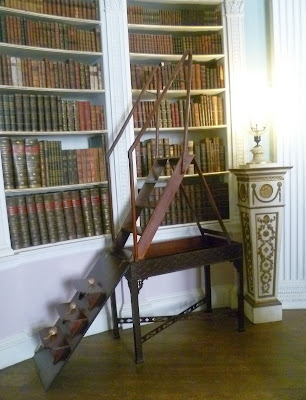 Nobody’s there, so, greatly daring, she climbs the library steps and finds The History of Tom Jones by Henry Fielding. Mama once told her that it was very shocking - no lady should be seen reading it. Gingerly, she takes Volume I off the shelf and tucks it under her arm; she would jolly well read it, she vowed, but nobody would see her doing so. A day or so later, she is back at the top of the ladder. Tom Jones is terrific and she can’t wait to read Volume II. The ladder is standing in shadow when she hears laughter and footsteps. Lord Ludovic comes in with another house guest, the asinine Sir Godfrey, he of the braying laugh. 'Who on earth is Miss Forbes, Manderville? Zounds! I took her for a scullery maid until Miss Pomeroy told me she is actually a guest!'

Rosa grabbed Volume II of Tom Jones, more than half-inclined to hurl it at him. Then, reluctantly, she lowered her hand. That way lay disgrace. They hadn’t noticed her so far but when they turned round… 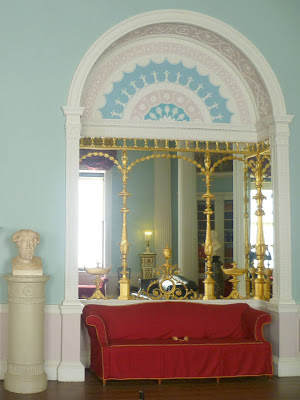 She glances across at the gold framed looking-glass in the alcove with the bust of Homer beside it, and, to her horror, sees Lord Ludovic looking straight at her. As their eyes meet, he winks and a tiny jerk of his head indicates that she escapes. He touches Sir Godfrey on the arm and points to the deer in the park. 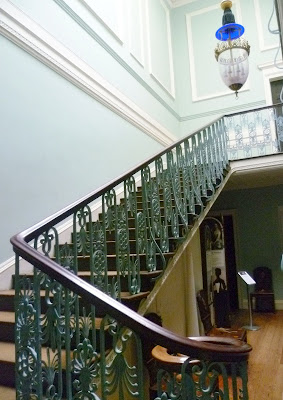 Lord Ludovic isn't all bad, thought Rosa, tip-toeing down the steps as fast as she could and fleeing back to her room, stumbling on the treads of the elegant cantilevered staircase. She finds her great-aunt’s lady’s maid in her bedroom with a couple of lengths of silk over her arm. ‘My Lady suggests that these would make you a couple of evening gowns,’ she spreads them over the bed. 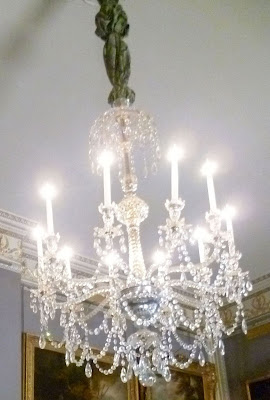 Then there’s the Drawing-room, where the ladies sit after dinner and wait for the gentlemen to finish their port and salacious stories before joining them. Rosa loves the way the chandelier's cut crystals sparkle in the candlelight. 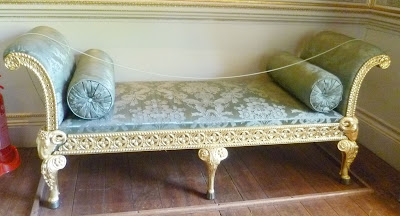 The chaise longue is covered in expensive damask and gilding

The chaise longue is obviously top of the range but it’s not comfortable. Rosa keeps feeling she’ll either slide off, or spill her coffee. Worse, the turquoise clashes with her new hyacinth blue silk evening gown. She overhears Sir Godfrey whispering behind Miss Pomeroy’s fan, and they both look in her direction. 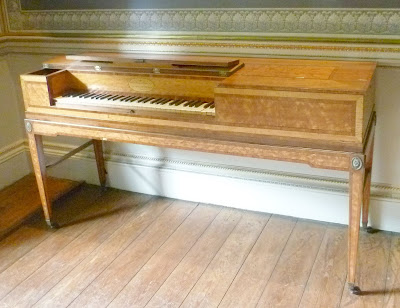 There is a pianoforte in the corner. Rosa used to have piano and singing lessons every week. After her mother died, when Rosa was fifteen, that stopped and her father refused to have the piano re-tuned, so she could no longer even practice.

The next morning, Rosa sneaks into the Drawing-room and discovers some music inside the hinged piano stool. It doesn't look too difficult. She finds a couple of country songs she knows, takes a deep breath, sits down, runs her fingers lightly over the keys and begins to sing.

A voice behind her, a rich baritone, joins in ….

And that’s just Chapter I.

Oh, write it, please! I am utterly intrigued. I love Rosa and Lord Ludovic is the perfect hero. What a delightful post!

Thank you, Elizabeth. The outline for a story just popped into my head while I was wondering how to do something interesting with the Kenwood photos. I've no idea what happens! Though Sir Godfrey is going to be a nasty piece of work and Rosa will flee into the woods on the far side of the lake.

That is quite delightful, Elizabeth - you MUST write the whole thing! Kenwood House is such an inspiration, I love it. And your photos are a wonderful reminder, thank you so much for this interesting and entertaining post.

Thank you, Melinda/Sarah. Kenwood has just re-opened the 18 century dairy where the ladies of the house played at being dairymaids, e la Marie Antoinette (though with a more fortunate outcome!). There were some very picturesque white speckled long horn cows. The problem is, for a novelist, that learning to milk cows isn't very Romantic!

I’m truly enjoying the design and layout of your website. It’s a very easy on the eyes which makes it much more enjoyable for me to come here and visit more often. Feel free to visit my website; 야설

I am extremely impressed with your writing skills as well as with the layout on your weblog. Is this a paid theme or did you modify it yourself? Anyway keep up the nice quality writing, it’s rare to see a great blog like this one nowadays. Feel free to visit my website;
한국야동


I just got to this amazing site not long ago. I was actually captured with the piece of resources you have got here. Big thumbs up for making such wonderful blog page Feel free to visit my website; 국산야동


This is a great inspiring article. I am pretty much pleased with your good work. You put really very helpful information. Keep it up. Keep blogging. Looking to reading your next post.Thanks for taking the time to discuss this. I feel about it and love learning more on this topic Feel free to visit my website; 일본야동

I was actually captured with the piece of resources you have got here. Big thumbs up for making such wonderful blog page! Feel free to visit my website; 일본야동