The fascination and process of using the amnesia trope

Personally, I’ve used it twice. In A Trace of Memory, our hero finds the heroine wandering in his woods, dishevelled and unable to remember who she is or how she got there. Of his two sisters, who are with him, one believes Elaine genuine, while the other suggests she is guilty of an elaborate ploy to entrap the eligible earl. Nevertheless, they take her in and look after her, although Charles is in two minds.

My current book just launched features another earl who is thrown from his curricle and injured. Widow Chloe takes him in but when he wakes his memory is missing. In this scenario, his identity is known as he has a groom with him, but Lance has no idea who he is and the story revolves around his mistaking Chloe for his lost love, Clarissa.

The working out of an amnesia plot follows the same pattern as any other Regency story. Boy meets girl. Attraction is followed by complications which, when resolved, result in the happily ever after – or at least a hope of it. The interesting bit comes in how much we can develop the symptoms and progress of the condition and how much that influences the story.

An amnesiac, by definition, has an impaired memory. We are not talking here of the distressing condition of the gradual onset of dementia which we know is not going to go away. For the purposes of romance, that would be impossible. But a knock on the head can produce a more immediately severe condition that is, we hope, temporary.

The trick lies in how much memory our amnesiac discovers through the story. How much of the mystery do we choose to reveal, piece by piece? What triggers can we use to build even a vague picture of this person’s past, and indeed of their character? The opportunities are legion and the development of the story depends upon those choices.

You can, for example, change a man’s whole character, as demonstrated by Harrison Ford in the film “Regarding Henry” where the hero survives a bullet and becomes a completely different individual, warmer and loathing what he learns of the man he used to be.

With Widow in Mistletoe, a dream-induced memory of Clarissa pitches Lance into the first and major complication since Chloe resembles her. He also begins to discover an arrogant attitude he had as a lord that he now deprecates. His confusions abound and he begins to fear for his reason. Chloe becomes the only stable point in his new existence.

I must say that as I was writing the story, I didn’t work this out ahead. It grew in the writing. Logic dictated that in a person who still has their faculties, the loss of memory must be distressing – unlike with dementia where often the victim does not realise they even have the condition. This presented scope for plenty of drama and the story became quite dark in places. It’s hardly gothic, but the psychological disturbance creates that darkness.

I wonder if this is the magnet that drives authors to the trope? The fascination with the psychological aspects of the condition and how that affects the victim and the people around them has so many possible permutations that it’s unlikely any one story is repeated elsewhere.

Nevertheless, I think it’s a risky trope. Easy to overplay or underplay it. For example, what of the convenient second accident that miraculously recovers the memory lock, stock and barrel? I suspect any amnesiac will retain hidden pockets that prove elusive. Far more believable to allow snippets to appear here and there and perhaps widen as familiar territory helps to jog them into more coherent memories.

I left my hero incomplete, I’m afraid, but at least with sufficient recognition to know who he was really in love with! 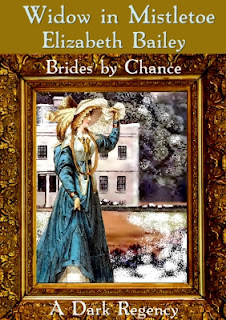 An overturned curricle creates a vanished memory. When Chloe takes in the injured lord, she puts her heart in danger. Dare she hope Lance may realise she is not his dead betrothed and learn to love her for herself?

Available from other stores

Posted by Elizabeth Bailey at 7:49 PM

A very interesting post, Elizabeth. I hadn't really thought of amnesia as an identifier of a genre before, but you are right. I used it myself, briefly, in 'A Desperate Remedy' when my heroine Decima was coshed in the notorious St Giles Rookery and was rescued by ... the hero, naturally!

I think what's useful about amnesia is that it allows the hero/heroine to become someone else for a while, which can allow them to experience emotions they wouldn't normally experience. A man, for example, may not be used to feeling vulnerable.

oh! Every one love to watched Game of Thrones.Most famous serial in the world.i really like your post great work sir
online accounting services

If you're looking to burn fat then you certainly have to start using this totally brand new custom keto diet.

Since their launch in early 2019, hundreds of clients have already transformed their body and health with the benefits a good keto diet can give.

Speaking of benefits: clicking this link, you'll discover 8 scientifically-tested ones offered by the keto diet.

I want to encourage you conttinue
your great writing, have a nice day! 토토

After I read and listened to the discussion of the article that you made, I found a lot of interesting information that I just found out.
온라인경마
경마사이트

I think this will really help many people with this knowledge that you have shared. success is always for you, yes! 카지노사이트

Hello friends, its great post about tutoring and completely defined, keep it up all the time. 토토사이트