The Romanovs: Every Jewel has a Story

The new exhibition at the Queen’s Gallery, Russia, Royalty & the Romanovs, is, as you might expect, a feast for the eyes, especially if you love Fabergé and late 19th century Russian jewellery – and who doesn’t? I thought, on this chilly December day, you might enjoy a peek at some of the treasures. 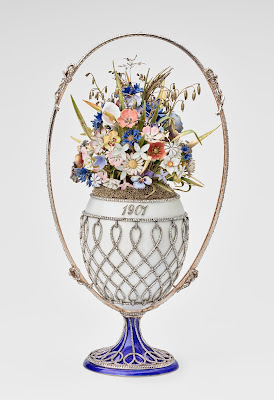 I'm starting with a love story which, alas, ended tragically: Princess Charlotte (1796-1817), only child of the Prince Regent, later King George IV, and heir presumptive to the throne, and the handsome Prince Leopold of Saxe-Coburg who arrived in London in 1814, in the train of Tsar Alexander I who was there, as Britain's ally, for the premature Peace Celebrations to mark the defeat of Napoleon and his exile to the island of Elba. I can find no record of whether Charlotte actually met the Tsar, but she certainly met Prince Leopold, and they fell in love. She immediately met opposition from the Prince Regent, who wanted her to marry William of Orange, but Charlotte persisted and, eventually, she and Leopold were married on 2nd May, 1816. 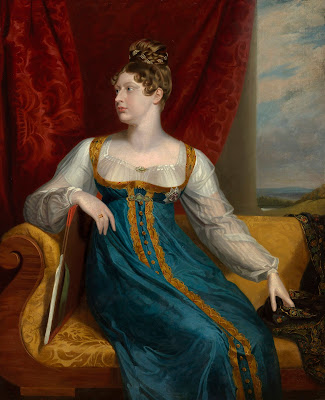 In the George Dawe 1817 portrait of Princess Charlottte, she is wearing a traditional Russian sarafan, or, more accurately, an English version based loosely on the sarafan. She is also wearing the Star of the Order of St Catherine, given to her by Tsar Alexander  I, which suggests that she might have met him. 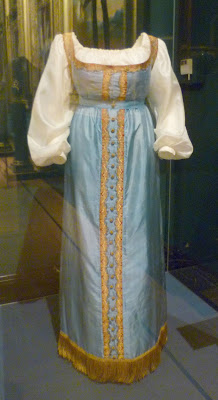 The actual dress is also shown above. The sarafan is, in fact, a pinafore dress and the Princess wore it over an embroidered linen blouse. The blue silk pinafore has a drawstring under the bust which allows it to be loosened as her pregnancy took its course. The gold lace braid incorporating crimson silk was made in London.

Tragically, Princess Charlotte died in childbirth in 1817. Two years later, Princess Alexandrina Victoria (incidentally, Princess Charlotte's first cousin, and later to be Queen Victoria) was born, Tsar Alexander became little Drina's godfather. The friendship between the Russian and British royal families was firmly established, and, until the Russian Revolution put a stop to it, gifts were constantly exchanged and a number of Anglo-Russian royal marriages took place. 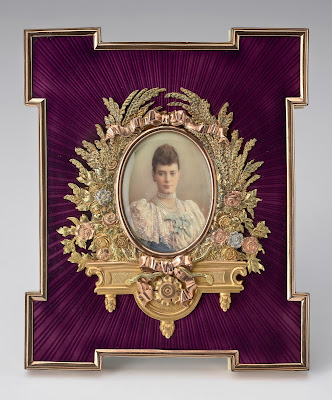 Portrait miniature of Maria Feodorovna, née Princess Dagmar of Denmark, in a Fabergé frame, about 1895 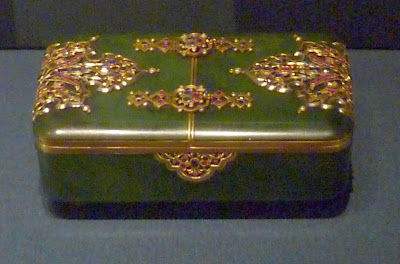 In 1874, Queen Victoria’s second son, Alfred, Duke of Edinburgh, married the Grand Duchess Maria Alexandrovna of Russia, daughter of Tsar Alexander II and the couple were given the above casket. 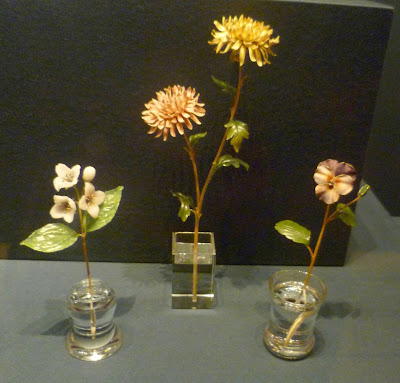 Two of Queen Victoria’s grand-daughters also married into the Romanov family; the Princesses Elisabeth and Alix of Hesse, daughters of the Queen’s second daughter, Princess Alice. Princess Elisabeth married the Grand Duke Sergei in 1884 and, most spectacular of all, Princess Alix, renamed Alexandra Feodorovna, married Tsar Nicholas II in 1894. 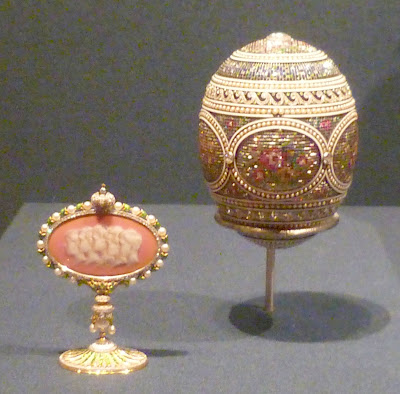 This egg is a technical masterpiece. It was commissioned by Tsar Nicholas II but never collected and it was subsequently confiscated by the Bolsheviks. Its construction is ingenious, it has an egg-shaped yellow gold and platinum lattice frame into which tiny brilliant diamonds, rose cut diamonds, emeralds, topazes, sapphires, garnets, half pearls, and moonstones have been inserted creating a petit point tapestry effect.

The 'surprise' inside is a jewelled and enamelled miniature of the silhouettes of the Tsar and Tsarina's five children, l - r in order of birth: Olga, Tatiana, Maria, Anastasia and Alexei. The designer was the Finnish Alma Theresia Pihi, who worked for Fabergé. 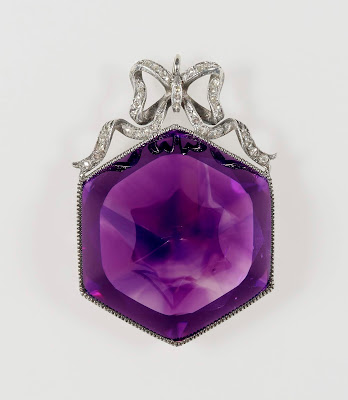 Royal families met before the First World War broke out. They dined on each others' yachts. 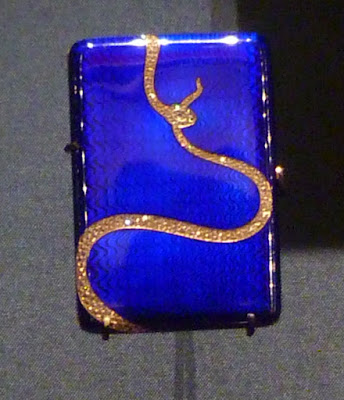 This vivid Art Nouveau royal é é Fabergé cigarette case with a sinuous two colour gold snake decorated with brilliant and rosé cut diamonds grasping its tail in its mouth was given to King Edward VII by his mistress, Mrs Keppel in 1908. The snake holding it's own tail is a symbol of  everlasting love. It is noticeably plainer than most Fabergé  objects we see associated with royalty - but it is supremely elegant. - as, indeed was Mrs Keppel.


Contrary to what one might expect, Queen Alexandra approved of Mrs Keppel who was kind, generous and tactful, and could always cheer up the King when he was moody. Alexandra even allowed Mrs Keppel to visit him to say good-bye when he was dying.

After his death, Queen Alexandra returned the cigarette case to Mrs Keppel, who remained on the Dowager Queen's guest list. That changed when Queen Alexandra died in 1925. Court life under Queen Mary and King George was much stricter (and possibly duller) and Mrs Keppel was firmly dropped. Then, in 1936, Mrs Keppel returned the cigarette case to Queen Mary so that it could always stay in the Royal Collection.

An interesting move and I can't help wondering why she did it. I don't altogether buy the 'official' reason. 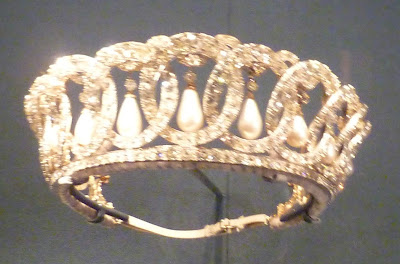 So, dear reader, if you want an idea for a novel, you could do a lot worse than go for the story of the Vladimir tiara.

The exhibition, Russia: Royalty & the Romanovs, is on at the Queen's Gallery until 28th April, 2019. It is well worth seeing and it certainly has the 'Wow!' factor.

I did a companion blog on the exhibition itself on 18th November, 2018 on my http://elizabethhawksley.com website. I have listed it under 'Exhibitions', 'Royal Connections', 'Celebrating the Arts' and 'Victorian Age' categories.

These sexy escorts have a hard time finding love in their lives as they can never refuse the customers who like them as darling to have a relationship with them. And Delhi Escorts Agency is the place where you will get such escort service for you.
Delhi Escorts

These Haridwar Escorts share a friendship with making an with the clients. Our Dehradun escorts women are now and again seen to go with their clients to get-togethers, clubs, and diners for contributing some quality energy as shown by their longings, etc.
Haridwar Escorts
Dharamshala Escorts

Are you in need of Loan? Here all problem regarding Loans is solve between a short period of time what are you waiting for apply now and solve your problem or start a business with funds Contact us now. many more 2% interest rate.(Whats App) number +919394133968 patialalegitimate515@gmail.com
Mr Sorina

I think this is among the most vital info for me.
And i am glad reading your article. But wanna remark on few general things,
The website style is great, the articles is really excellent
경마사이트
경마

I do trust all of the concepts you have presented to your post.
They’re very convincing and can certainly work.
토토
토토사이트