The panther sneered, turned his gun on Luke and pulled the trigger...and Luke dropped, like a corpse, to the floor. In the confusion the Panther stuffed his empty pistol into his pocket and slid backwards to vanish behind the bushes.

Hester's raised hand fell to her side and she swooned into the conveniently waiting arms of The Duke of Eaglesbane. Charlotte, made of sterner stuff, dropped to her knees to attend to the fallen man.
Ryder took command- someone had to- there were far too many lords cluttering up the place. 'Wakeham, Hawksmere -assist Jack into the house- he will freeze to death if we don't get him inside. Eaglesbane carry Miss Hester in.' He gestured at Chaderton and Ravensdeep.' Here- you two- don't stand there gawping - get over to the militia and tell them what's happened. They can apprehend the villain.'
The two lords took to their heels - they recognised the voice of authority.
This still left several lords milling about, getting in the way.
'Ryder, Luke is not badly hurt - the bullet grazed his head and has left him dazed but he is recovering his senses now.'
'Excellent, my dear.' Ryder bent down and offering his gloved hand to Charlotte pulled her to her feet.

'Here, you two, help Luke to his feet and take him to the house.' He froze, as a hideous noise echoed around the park. 'Good God! Someone is skinning a cat!'
Charlotte moved closer, revelling in the warmth of his embrace. The remaining group stared with rounded mouths as the wailing and screeching approached.
Charolotte started to giggle. 'Look, Ryder, i'ts pipers- and there are eleven of them- I remember Lady Heston telling me she had booked a group to play at the ball.'
'Pipers? That's all we need. We already have the militia and if I'm not mistaken there are a disreputable group of riflemen with them. All we need is for the excise men Jack spoke of to arrive and my day will be complete!' 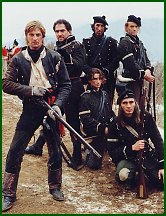 Charlotte shivered violently; they had both forgotten, in the excitement, that her pelisse was soaked from assisting her brother from the lake. 'Charlotte, my dear, you are so pale, are you unwell?'
She tried to answer but his face was wavering strangely and his voice was indistinct and her words remained trapped inside her head as she collapsed into unconsciousness. Ryder swept her up and strode off towards the house.
Lord Chadderton sighed as he slipped his arm through that of his close friend Penstable.


'Oh dear! How many more fainting damsels are we to be witness to?'
Penstable replied.'I am far more interested in the pipers, my dear.'
The two, tulips of the ton, turned to go in when an uncouth voice halted them.
'Not so fast , my lords, you'll make a fine pair of hostages. I ain't giving up so easily....'

Fenella Miller
Posted by Historical Romance Author at 7:03 AM

Oh dear, all this excitement and a picture of Sharpe, too. It there a spare lord hanging around? I think I am going to faint.....

Who would have thought that the story would take so many turns. My best wishes to whoever has to do the last pice - glad it isn't me!

This has been such fun to do! I am looking forward to bringing it to a delicious close!
Anne H

I think the whole thing should be printed out and appear in an anthology - I'm going to do that and give it to friends to read over Christmas. Perhaps we could do another one for Valentines day?
Fenella