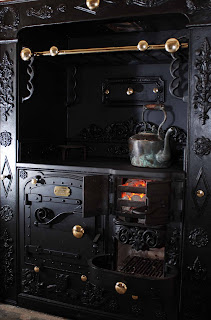 No one is absolutely sure when the first Cornish range was invented, but we do know that a company in Camborne had begun making them by 1840. Soon demand began to outstrip supply and before long local blacksmiths in nearly every village had began to make them. Soon the range was the "must-have" in every Cornish home. Though my mother soon replaced ours with an electric cooker, the lady in the house opposite was still using hers in her 80s, and every week she would black-lead it and polish the brass until it gleamed.
Before the advent of the range most Cornish cottages and many of the big houses did their cooking over an open fire in a huge hearth. Kettles and pots hung from hooks over iron bars set in the chimney. Some fireplaces had a cloam oven set in the side. This would be filled with burning coals from the fire, then when it was sufficiently hot, the coals would be removed, the food placed inside and left to cook.
Those without a cloam oven used a circular plate of iron that stood on a three-legged iron stand called a brandis, placed over flattened coals or wood. The iron was heated, the pasties or cakes to be baked were then placed on it, and a domed cover put over the top. An hour or so later the cover would be removed, the food was ready, and as clean as if it had been cooked in a modern oven.

This range was the forerunner of all the others. It had an adjustable plate or pan rack, dampers to control the heat, an easily removable ash-tray (the ashes would be emptied into a metal bucket and kept for tipping down the privvy) and removable iron rings of varying sizes in the "slab" above the fire that allowed a faster boil or slower simmer. In fact it was this large flat iron "slab" that gave the stove its colloquial name.

Though the book I'm currently working on, and in which one of these "new-fangled" ranges appears is set in 1840, the picture is of a new range. Identical in every respect to the original they are making a come-back and selling as fast as specialist manufacturers can make them. Once more the Cornish range is making the kitchen the warm heart of home.

Jane Jackson
Posted by Historical Romance Author at 8:20 AM

I'd love one and the Cornish cottage to put it in - well we all have our dreams!

Looks lovely, Jane - but what a job black-leading that lot!