The New Year is traditionally a time for resolutions, often including plans for a healthier lifestyle, so I thought I would go back and take a look at how our ancestors enjoyed themselves at this time of the year.

During the Georgian and Regency period, Christmas was the traditional time for entertaining on a lavish scale. Lord Fermanagh, who did not consider himself a wealthy man, entertained "as many as 400 people a day and rarely less than 100." These would include the performers such as morrismen and wassailers, workers from the estate as well as house guests and relatives. The menu might include a fricassee of chicken or chicken in brandy-wine, duck in port, jugged pigeons – apparently a "pupton of pigeons" (a pigeon pie in a forcemeat crust) had gone out of fashion by the nineteenth century but it sounds intriguing! Foreigners were often impressed (or appalled) by the gargantuan appetites of the English. In 1795, Parson Woodforde gave a dinner for 21 guests (a snug little dinner by the standards of the times) and served "three joints of beef, a leg of mutton, fish, rabbits, plenty of puddings, both small and strong beer, punch (made from six bottles of rum), wine and five bottles of port."

At this time savoury and sweet dishes would be served together – the first course consisting of soups, boiled meats, fish, small roasts, pies and vegetables with a few sweet puddings. The second course would be roast meats, fricassees and ragouts with fruit pies and custards. 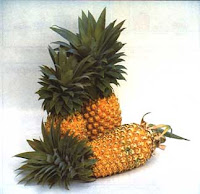 Favourites at the time were flummery (an orange and cream jelly) served in a magnificent mould, chocolate pye decorated with gold-leaf almonds and crystallised rose petals and that popular symbol of wealth the pineapple. This could be soaked in brandy or chopped and piled back into the shell. The leaves of the pineapple could be gilded really special occasions.

In "Honours of the Table" (1788), John Tussler explained that the guests proceeded into the dining room in order of superiority. The mistress of the house would sit at one end of the table with ladies of superior rank on her right and left, those next in rank would follow while the gentlemen and master would do the same at the other end of the table. But be careful, for he warns that "…nothing is considered as a greater mark of ill-breeding, than for a person to interrupt this order or seat himself higher than he ought." However, in town houses this formal seating was not observed and there was even a new fashion, a "promiscuous mode of seating" as Tussler calls it, of men and ladies sitting alternately around the table!

At the dessert, the cloth, napkins and dishes would be removed and the mahogany table would gleam in the candlelight until it was covered by decanters of wine, comfits in porcelain or crystal dishes and fruit in elegant baskets. Towards the end of the dessert the ladies would withdraw and leave the gentlemen to their drinking. 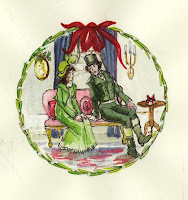 Now all this makes me feel really good, because I realise that my own seasonal indulgence is not really so bad after all!
Happy New Year to you all (and a special thank you to Jane Odiwe, who provided the lovely illustrations for last year's Christmas story - I thought it might be nice to see this one again!)
Melinda Hammond
Posted by Historical Romance Author at 12:58 AM

Blow the resolutions-I'm all for a twelfth night party with lashings of flummery and that chocolate pye which sounds to die for!
I am actually feeling very guilty today because I ate the best part of a chocolate orange yesterday without any help - are there any Regency diets you could recommend?

I should think after eating all that lot, the larder would be bare so you'd HAVE to diet!