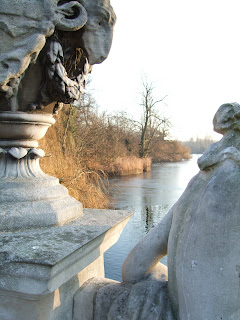 I spent a day recently exploring Hyde Park and Kensington Palace and gardens with my copy of “The Picture of London for 1807: being a correct guide to all the curiosities, amusements, exhibitions, public establishments and remarkable objects, in and near London” clutched in my frozen fingers.
I’d gone there to find some information for Christine Merrill, one of the US authors of the Regency continuity I’m working on - she needed to know what species of tree her hero and heroine might accurately be kissing behind.
The answer was, not very much in 1815, not if they wanted to preserve their privacy. According to my guidebook “A few years since, Hyde Park was a little deficient in wood, many of the old trees having decayed; but recently some judicious plantations have been made, that will greatly enliven its general appearance.” And, looking at the trees now, it is obvious that 200 years ago they would have been very young indeed. Christine’s hero and heroine were going to have to find somewhere else for their embraces.

The parks and gardens looked fabulous in the frosty mist and all that was missing, I thought, were skaters on the ice. 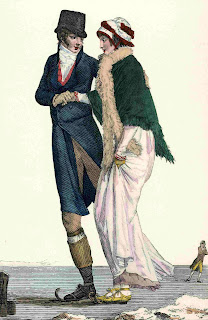 According to The Picture of London “In severe winters, when the Serpentine River is frozen over, the ice is almost covered with people. One winter there were counted more than 6,000 people at one time on the ice. A number of booths were pitched for the refreshment of the populace; and here and there was a group of six, eight or more, fashionable young men, skating, and describing very difficult figures, in the manner of a country dance, with particular neatness and facility of execution. In general, however, the English do not excel in this very exhilarating and wholesome exercise.
From the number of accidents which happen annually on this river when frozen over, his majesty gave the Humane Society a spot of ground on its banks, on which they have erected a most convenient receiving house for the recovery of persons apparently drowned; it cost upwards of £500 and is worthy the inspection of the curious. The society, during the time of frost, keep men on the river to guard the unwary from danger, and to relieve those who may require their aid.”
There’s no sign of the “convenient receiving house” now, but I have suggested it to Christine as a possible retreat for her amorous couple. Whether she’ll use it I don’t know - perhaps the risk of being interrupted by the life savers would be too much for even the boldest of heroes.
The photograph is of the Long Water (Hyde Park bank) from Prince Albert’s Italian Gardens and the print from the French series Modes et Manières published in the early 19thc.
Louise Allen
Posted by Historical Romance Author at 5:00 AM

Love it, Louise! One should always make sure there is a convenient receiving house nearby when one feels the urge to partake in exhilarating and wholesome exercise.

Lovely shot of the Long Water too.

Fascinating stuff. Thanks, Louise. It must have been some "house" if it cost over £500 in those days, don't you think? At first I imagined a sort of Regency wooden bus shelter, open at one side, but somehow I fancy I need to raise my game here. If Prinny had anything to do with it, it probably had a gilded dome on top!

Fascinating, Louise! If there were 6,000 on the ice it must have been very thick. The amorous couple could always hid behind the receiving house.....

Who would have thunk Hyde Park was devoid of trees in 1815! Thanks for the heads up. I've stored that bit of trivia away for future reference.