PITFALLS (OR DITCHES) OF WRITING REGENCY: THE HEROINE AND SOCIETY

You often hear of a reader tossing a Regency romance aside in disgust and saying: this is a modern romance in Regency clothing. The obvious reasons for this are that the language is all wrong, or there are several horrible historical howlers that are too obvious to ignore. But one of the most important things that makes a Regency novel indigestible for the savvy Regency reader is that it they’ve forgotten a crucial player on the stage: Society.

A Regency novel without the unspoken (and often spoken) presence of Society is like a plum pudding without the raisins.*

A modern heroine wondering onto a Regency set will act as if she’s an individual, as if she’s free to interact with her hero in any way she chooses. The conflict of the novel is restricted to just the two of them, and the world outside is tossed to the four winds. But in a good Regency novel, Society is the third party in a triangle. The Strong Regency Heroine, in addition to having conflict with her hero, has to contend with Society as well. The moment you have a heroine coming onto the scene with no clue that Society is her big adversary, she is either in for a big surprise, or the experienced reader is going to put down that book.

If you think of some of the best Regencies you have read, note how many of them have excerpts from scandal sheets or references to scandals. Julia Quinn comes to mind, with her excerpts from Lady Whistledown’s Society Papers. The need to include Society as a character at times becomes so crucial that the author will actually create a character – like Lady Whistledown -- or a group of ladies to embody it. The boundary between internal conflict and external conflict in these situations is blurred, because Society is both an internal and external part of the heroine’s makeup.

It doesn’t always have to be fear of scandal either. Society can intervene between the hero and heroine in many different ways. In my novel An Improper Suitor, for example, a bluestocking heroine is pressured by Society, represented unexpectedly by her grandmother, to marry, not to a bluestocking like her (can a gentleman be a bluestocking?**) but a rake, and she is later compelled to get engaged to him when she thinks she has been compromised by a kiss. She and her grandmother consult the Society papers to determine if she needs to go through with the engagement or not.

If you don’t want your phaeton wheels to fall into one of those ruts in the road that are so important to Regency plots – okay, maybe you do want that wheel to break – remember that the ever present ton is not simply a background stage drop – a chance to show those costumes, or to hold a ball -- but one of your biggest sources of conflict in the novel.

*Traditionally plums are not plums. “Plums” referred to raisins.
**The answer to this is yes – the original Blue Stockings Society’s 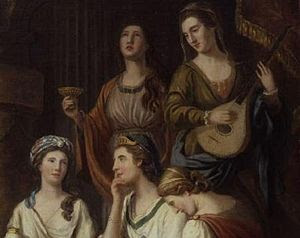 membership (some pictured here on the right) had a majority of women, but included men, and was named, in fact, after a knowledgeable gentleman, Benjamin Stillingfleet, was invited to join, but did not have the required formal wear which was black stockings. He showed up in blue stockings instead, and the group adopted this name to refer to their indifference to matters of fashion.

Monica Fairview, whose AN IMPROPER SUITOR is coming out in Large Print from Thorndike on 15 April 2009.
Posted by Historical Romance Author at 8:00 AM

Anonymous said...
This comment has been removed by a blog administrator.
5:15 AM

Hi Monica,
Fascinating post, I love the idea of society being a character. And speaking of characters, I wish I could read the comment above!
Best wishes
Carol

Interesting post Monica. We love our heroes and heroines to break with convention and sometimes flout the proprieties but the consequences of their actions within Society is often a great source of conflict. My Loveday family constantly step close to the boundaries and sometimes cross them and that is when the fireworks start and retribution and redemption can be powerful suspense subplots.

Thank you all for the feedback. And yes, Kate -- our unconventional heroines often flout the proprieties, which is part of the fun, isn't it?

Excellent post, Monica. I would add that even when Polite Society doesn't enjoy a significant presence in the story, it lurks in the background.

I, of course, a newcomer to this blog, but the author does not agree