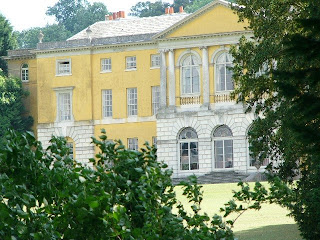 Many of you will know that I take inspiration from the wonderful English houses owned by the National Trust. West Wycombe in Buckinghamshire is a beautiful mansion once owned by Sir Francis Dashwood (founder of the infamous Hellfire Club) and inspiration for Malberry Court, where much of the action takes place in my latest Sarah Mallory novel, The Wicked Baron. These are two of the views of West Wycombe that fired my imagination when planning the story: Carlotta frequently walks to Malberry from her house and takes a short-cut through the trees and bushes that bound the park. The second picture shows 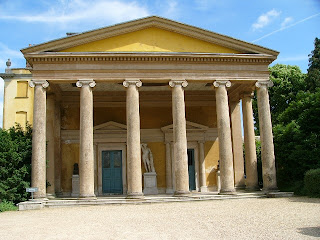 the original entrance to West Wycombe is very like the frontage of Malberry with its newly-painted frescoes on the ceiling just beyond the portico.

My heroine Carlotta's father is an Italian artist, commissioned to decorate Malberry Court with murals and frescoes. He "signs" his pictures by painting a small snail, a "lumaca", somewhere in the scene. Imagine my delight when I read that an Italian snail was discovered at Cliveden, another National Trust property not that far from West Wycombe. It would appear that this tiny snail hitched a ride to England in 1896, when marble was imported from Italy to form a balustrade at Cliveden. This may be almost a century later than my own story, but it shows the importance of the Italian influence upon English landowners – and I like to think that this snail is something like the one Carlotta's father would have depicted in his pictures! 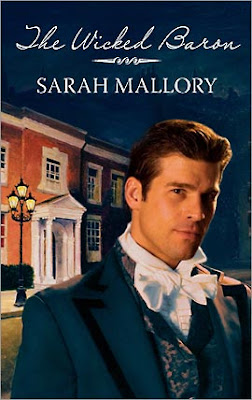 Posted by Historical Romance Author at 3:51 AM

Seems like a cosy little place, Melinda. Looking forward to reading the book!

Interesting post Melinda. I am always fascinated how other writers are inspired and certainly visiting one of the great country houses open to the public helps fill the old notebook with ideas.

Glad you liked the post, Jan and Kate. I love old buildings and the images they conjure. I am sure, like me, inspiration isn't a problem - it's finding the time to write it all down!

Isn't it great when you find just the right place for a scene, or to locate one of your characters? It feels "meant" somehow. But of course, they are real, so why shouldn't we stumble across ther haunts now and again?