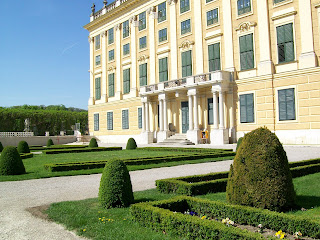 This is the garden entrance to Schonbrunn where, in 1814 during the Congress of Vienna - the period of my next book - Napoleon's wife, Marie-Louise, eldest daughter of Austrian emperor Franz-Joseph, was held with her young son. She had wanted to accompany her husband into exile, but Metternich, the Austrian chancellor - a skilled manipulator and the driving force behind the Congress - persuaded her father it would give them greater bargaining power if she remained in Austria. In effect she was a hostage.
It was in under the personal supervision of Marie-Louise's grandmother, Empress Maria Teresa, that this former hunting lodge dating back to the Middle Ages was transformed over a period of forty years into a splendid palace, elaborately ornamented both inside and out in the Rococo style. Yet after the Empress's death in 1780 Schonnbrun remained empty until the early 1800s when Marie-Louise's father started using it as his summer residence in order to escape the heat and the stench of the river. During the Congress, Marie-Louise and her son lived there virtually alone but for servants, relying for company on visits from the wives and mistresses of the crowned heads of Europe, all of whom had their own agenda. The heroine of my book is a young and gifted artist who for a short time becomes Marie-Louise's friend. I'm so looking forward to following her adventures.
Jane Jackson.
www.janejackson.net
Posted by Historical Romance Author at 8:00 AM

Interesting post Jane. So often Marie-Louise is overshadowed by the more dramatic relationship between Napoleon and Josephine. To have your heroine as her friend at this difficult time for Marie-Louise will be a fresh and exciting insight into this period. With your strong characters and portrayals of action and adventure I am already impatient for this to be on the bookshelves.

Thanks so much for that, Kate. I can't wait to get started.

Brilliant idea for a story!:) Also the background - the Vienne Congress! Looking forward to it!

Fascinating! I set a story there, "Vanessa," but I've never actually visited the palace. I read lots of contemporary accounts and studied it on the map, as well as talking to people who had visited the palace. I'm always surprised more stories aren't set at the Congress, because the more you read about it, the more glamorous it gets. Everybody was there. London must have been empty that year!

I often think there's something in the ether with authors. It happens so often that authors have similar ideas around the same time, quite independently.

From what you've said about your forthcoming story, Jane, I fancy it's going to be very different from mine. Your artist heroine sounds intriguing. You also sound to be more sympathetic to Marie-Louise than I was.

I lost a lot of sympathy for her when I read that she was having sex with her young escort, Count von Neipperg, within two days of setting out from France. Not a lot of marital fidelity there! In her defence, Neipperg had been deliberately picked by Metternich with the intention of tempting her to stray.

Although Marie-Louise was rather weak, she was very much a pawn of powerful men -- her husband, her father, and others -- so perhaps I was hard on her in my story. And she did eventually marry Neipperg, too.

I do hope you enjoy writing about her. And having an excuse to visit glorious Schoenbrunn is definitely a bonus.

You've probably found it already, but I can heartily recommend Adam Zamoyski's book, Rites of Peace, published in 2007. It's quite a tome, but it describes the Congress with both breadth and depth.

Jane - Thanks for the fascinating insights about an interlude about which I knew very little in detail until I read Joanna Maitland's exciting book His Reluctant Mistress (could't wait for the UK edition to come out!) Now I've got another excellent reason for exploring the Congress from a different point of view.

I am an avid reader of historical fiction -- Ken Follett's PILLARS OF THE EARTH and WORLD WITHOUT END, Anya Seton's GREEN DARKNESS, Barbara Erskine's LADY OF HAY, Carolly Erickson's LAST WIFE OF HENRY VIII, Margaret George's MARY, CALLED MAGDALENE, Kate Tremayne's LOVEDAY SAGA and many more. However, I've never (to my knowledge) ventured into the fascinating world of historical romance. With what books would you recommend I start? And, if the books are part of a series, all the better!!!

Gosh, Marilyn, what a question!

I'd say it depends on how adventurous and also how sexy you like your reading to be. But you wouldn't go far wrong by starting with the authors who are part of this blog!! (Yes, I would say that, wouldn't I?)

Why not check out some of our websites and read a few extracts to decide what you fancy? The website links are all on the main blog page.

And if you haven't ventured into this territory before, you've got loads of treats in store.

Thanks ladysusan, Lynne and Louise. Joanna, it's terrifying how often authors' ideas coincide!
Last year I bought (among other research books) Adam Zamoyski's Rites of Peace and it has proved invaluable. The fact that Marie-Louise was a pawn is the reason I have sympathy for her.
Marilyn, you're in for a treat!

I agree, Jane. Terrifying. And happens a lot.

When I was writing the Aikenhead Honours trilogy, I didn't dare read the first of Louise Allen's Ravenhursts because it features a chase across France and so did book 3 of my trilogy which I was still writing. I kept Ravenhurst #1 as a treat for when I'd finished writing mine.

I should add, for Marilyn's benefit, that the Louise Allen Ravenhurst books are terrific. I'm still in love with Jack Ryder, hero of the first in the series (The Dangerous Mr Ryder).

And, of course, when I did read Louise's Jack Ryder book, it was totally unlike what I had written in mine.

I'm sure the same will be true of your treatment of Marie-Louise, Jane. My heroine is an opera singer who sings for the ex-Empress and becomes her confidante. I think you said your heroine is to be a painter? And when it comes to the crunch, my heroine all but slaps Marie-Louise's face which I'm sure yours would never do, since you are so much more sympathetic to her plight.

Sounds like you're going to enjoy writing about her. I wouldn't read too many of her private letters, though, because I think your sympathetic attitude might be put under strain. She did admit to spending hours on end just sitting crying. Not her fault perhaps, but it made her too much of a wimp for me.

Joanna, I know exactly what you mean about being wary of reading other peoples' books using the same location/background/period. That said, if you were to give ten authors the same character/situation/background, you would get ten completely different stories as we all apply our own ideas and interpretation. In my book Marie-Louise is only a minor character. But as we were recently in Vienna the opportunity to visit Schonbrunn and see where she lived was too good to miss.
Your heroine sounds very spirited!

I've been to many palaces in Austria, but haven't managed this one yet. Look forward to hearing more about the story.

Alison, do visit if you get the chance. It's definitely worth seeing. In 1815 it was surrounded by woods. Now it's surrounded by urban sprawl. Yet once inside the gates it's easy to imagine oneself back in time.

Joanna, thank you for your recommendations. I will heed your good advice. Until you pointed it out, I was unaware that many of the contributors to this blog are authors of historical romance. I am very impressed! Thanks again.