I'm very glad to say that the UK version of my novel, THE OTHER MR DARCY, published by Robert Hale, is now available. I was quite thrilled with the cover, which looks very elegant indeed. The online image doesn't quite do it justice

Since I enjoy looking at things from a bit of a different perspective, I've teamed up two very different people: the prim and proper Miss Caroline Bingley, and Mr Darcy's enigmatic American cousin Robert Darcy, and I had the greatest fun (and I admit, more than a few chuckles) watching them interact.

It's very definitely a romance, so for those of you who don't care for the Jane Austen aspect of it, it's a stand alone novel. 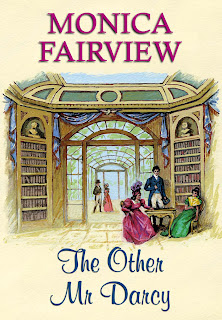 You don't need to know Pride and Prejudice to enjoy it.

For a brief flavour of the novel, here's a short exerpt:

The Other Mr Darcy
Prologue

Caroline Bingley sank to the floor, her silk crepe dress crumpling up beneath her. Tears spurted from her eyes and poured down her face and, to her absolute dismay, a snorting, choking kind of sound issued from her mouth.

“This is most improper,” she tried to mutter, but the sobs — since that was what they were — the sobs refused to stay down her throat where they were supposed to be.

She had never sobbed in her life, so she could not possibly be sobbing now. But the horrible sounds kept coming from her throat. And water — tears — persisted in squeezing past her eyes and down her face.

Then with a wrench, something tore in her bosom — her chest — and she finally understood the expression that everyone used but that she had always considered distinctly vulgar. Her heart was breaking. And it was true because what else could account for that feeling, inside her, just in the centre there, of sharp, stabbing pain?

And what could account for the fact that her arms and her lower limbs were so incredibly heavy that she could not stand up?

She was heartbroken. Her Mr Darcy had married that very morning. In church, in front of everyone, and she had been unable to prevent it.

He had preferred Elizabeth Bennet. He had actually married her, in spite of her inferior connections, and even though he had alienated his aunt, Lady Catherine de Bourgh, whose brother was an earl. Caroline simply could not comprehend it.

She had that tearing feeling again and she looked down, just to make sure that it was not her bodice that was being ripped apart. But the bodice, revealing exactly enough of her bosom as was appropriate for a lady, remained steadfastly solid. So the tearing must have come from somewhere inside her. It squeezed at her with pain hard enough to stop her breathing, and to force those appalling sobs out even when she tried her best to swallow them down.

She rested her face in her hands and surrendered to them. She had no choice in the matter. They were like child’s sobs, loud and noisy. More like bawling, in fact. Her mouth was stretched and wide open. And the noise kept coming out, on and on.

On the floor, in the midst of merriment and laughter, on the day of William Fitzwilliam Darcy’s wedding, with strains of music accompanying her, Miss Caroline Bingley sobbed for her lost love.

A long time later, someone tried to open the door. She came to awareness suddenly, realizing where she was. The person on the other side tried again, but she resisted, terrified that someone would come in and catch sight of her tear-stained face. No one, no one, she resolved, would ever know that she had cried because of Mr Darcy.

Whoever was on the other side gave the doorknob a last puzzled rattle, then walked slowly back down the corridor.

She rose, straightening out her dress, smoothing down her hair with hands that were steady only because she forced them to be.

She needed to repair the ravages her pathetic bawling had caused. At any moment, someone else could come in and discover her. She moved to look into a mirror that hung above the mantelpiece.

And recoiled in shock...


Monica Fairview, whose Other Mr Darcy has finally made its appearance.
Posted by Historical Romance Author at 2:13 PM

Congrats Monica - I look forward to reading it.

Brilliant - you managed to make me laugh and fell sorry for Caroline which is something I thought I'd never do! Congratulations on your book - I'm sure it will do well.

Yes,that's the challenge, isn't it? Making Caroline human. She was given a very raw deal in P&P.

Thank you for your good wishes, Jane and Laurel Ann.

Looking forward to reading this!