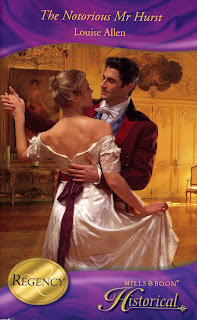 This month sees the publication of the fifth in my Ravenhurst series - The Notorious Mr Hurst, the story of the Ravenhursts’ friend Lady Maude Templeton who has already put in an appearance in The Shocking Lord Standon and Disrobed & Dishonored.
Maude has fallen for the most unsuitable of men - theatre manager Eden Hurst. He doesn’t believe in love and he is completely ineligible but Maude is determined and sets out to get her man behind the scenes at Eden’s Unicorn Theatre.
All the old London theatres have been burned down (often several times) or remodelled out of existence, so it was hard to find one to soak up the atmosphere. The oldest theatre building in London is the Theatre Royal Haymarket designed by John Nash which reopened in July 1821 and this view of it down the newly extended King Charles II Street is from Ackermann’s Repository of the following year.

For an authentic late Georgian theatre interior I went to the Theatre Royal, Bury St Edmunds where the 1819 interior has been carefully restored along with the boxes where servants were sent to keep the places for their masters during the “boring” early parts of the performance.

I also had some luck finding original theatre programmes which give the flavour of the type of theatre Eden was running - without a “patent” from the Lord Chamberlain they were forbidden to perform straight dramas so music, dancers and farce were all staged, much to the appreciation of the audience. 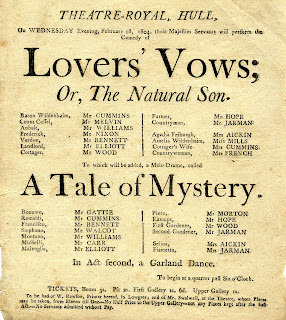 ‘And so, my false love – I die!’ The maiden sank to the ground, a dagger in her bosom, her white arm outflung.
The audience went wild. They applauded, whistled, stamped and, those members of it who were not weeping into their handkerchiefs, leapt to their feet with cries of ‘More! More!’
The dark-haired lady in the expensive box close to the stage gripped the velvet upholstered rim and held her breath. For the audience who had flocked to see the final performance of The Sicilian Seducer, or Innocence Betrayed, the tension was over and they could relax into their appreciation of the melodrama. For Lady Maude Templeton the climax of the evening was about to occur and, she was determined, it would change her life for ever.
‘You would never guess it, but she must be forty if she’s a day,’ Lady Standon remarked, lowering her opera glass from a careful study of the corpse who was just being helped to her feet by her leading man.
‘One is given to understand that La Belle Marguerite never mentions anything so sordid as age, Jessica.’ Her husband turned from making an observation to Lord Pangbourne.
‘Fine figure of a woman,’ the earl grunted. He was still applauding enthusiastically. ‘Not surprising that she was such a sensation on the Continent.’
‘And so much of that figure on display,’ Jessica murmured to Maude who broke her concentration on the shadowy wings long enough to smile at her friend’s sly remark. The loss of focus lasted only a moment. Tonight was the night, she knew it. With the excitement that surrounded a last night at the Unicorn she had her best opportunity to slip backstage. And once she was there, to make what she could of the situation.
Then her breath caught in her throat and her heart beat harder, just as it always did when she glimpsed him. Eden Hurst, proprietor of the Unicorn theatre, strode onto the stage and held up both hands for silence. And by some miracle - or sheer charisma - he got it, the tumult subsiding enough that his powerful voice could be heard.
‘My lords, ladies, gentlemen. We thank you. On behalf of Madame Marguerite and the Company of the Unicorn, I thank you. Tonight was the last performance of The Sicilian Seducer for this, our first full Season.’ He paused while exaggerated groans and shouts of Shame! resounded through the stalls and up into the gods. ‘But we are already looking forward to Her Precious Honour to open in six weeks’ time and I can assure her many admirers that Madame Marguerite will take the leading role in this dramatic tale of love triumphant over adversity. Goodnight to you all and I hope to welcome you next week for our revival of that old favourite, How to Tease and How To Please, with the celebrated Mrs Furlow in the leading role.’
‘Damn good comedy that,’ Lord Pangbourne pronounced, getting to his feet. ‘I recall it when it first came out. In ’09 was it? Or the year after?’
Maude did not hear her father. Down below in the glare of the new gas lights stood the man she desired, the man she knew she could love, the man she had wanted ever since she had first seen him a year before.
Since then she had existed on the glimpses she caught of him. In his theatre she sat imprisoned, in a box so close she could have almost reached down and touched him. On the rare occasions he had attended a social function where she had been present he been frustratingly aloof from the unmarried ladies, disappearing into the card rooms to talk to male acquaintances or flirting with the fast young widows and matrons. And even she, bold as she was, could not hunt down a man to whom she had not been introduced and accost him. Not in the midst of a society ball and not a man of shady origins who had arrived in England trailing a tantalising reputation for ruthless business dealing and shocking amours.
And last Season he had closed the Unicorn for renovations and returned to the Continent for a tour with his leading lady only months after they had arrived in England.
Standing there he dominated the stage by sheer presence. Tall, broad-shouldered, with an intense masculine elegance in his dark coat and tight pantaloons, yet somehow flamboyant and dramatic. Maude caught the sharp glitter of diamonds at his throat and from the heavy ring on his left hand and recognised that his clothes had been cut with an edge of exaggeration that would be out of place in a polite drawing room. He was a showman, demanding and receiving attention just as much as the most histrionic actor.
‘Maude,’ Jessica nudged her. ‘One of these evenings your papa is going to notice that you dream through the performances and only wake up when Mr Hurst is on stage.’
‘I don’t dream,’ she contradicted, finally getting to her feet as Eden Hurst walked off stage to loud applause. ‘I am watching and I am listening. I have to learn how this place works.’
Posted by Historical Romance Author at 5:00 AM

And the book goes on getting better from there! Just fabulous, Louise.

I posted a view from the box actually on the stage at the Theatre Royal, BStE on my blog

I love regency romances with a stage background. There's something about the atmosphere of a theatre that heightens the tension...