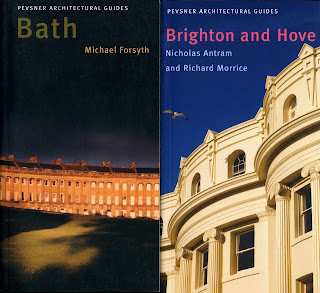 For several months before Christmas I buy research books, justifying them as my Christmas presents to myself. (The rest of the year the justification varies - my birthday - that works for 11 months - the fact there's a Monday in the week; I might need it someday; the bookcases haven't quite collapsed yet...)
I was admiring the pile of enticing reading by my desk and I thought I would share them with you - just in case anyone needs some help spending that Christmas book token.
The first are two of the new series of Pevsner Architectural Guides published by Yale University Press. They are paperback, small enough to carry around easily and full of coloured illustrations. Bath (Michael Forsyth) and Brighton & Hove (Nicholas Antram & Richard Morrice) were the obvious choices for me and I can't wait for the Spring so I can revist both towns and try out the detailed walks that make up the main part of the books. 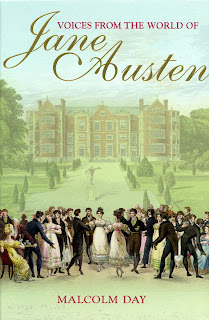 My next choice is one that I am already dipping into - an ideal fireside read as the rain falls outside. Voices from the World of Jane Austen by Malcolm Day (David & Charles) draws on letters, diaries, sermons, journal articles, travelogues and Jane Austen's novels themselves to look at topics such as "Marriage, wealth & breeding", "The rhythm of the year", "Domestic life" and "In public".
There are coloured plates and charming black and white drawings and plenty of Austen-information such as a map, a family tree, gazeteer and chronology.
But the scope is much wider than Jane herself and the extracts range from far and wide - you really can "hear" those voices.
Next is a fabulous blockbuster of a book, the revised 3rd edition of The London Encyclopedia published by Macmillan 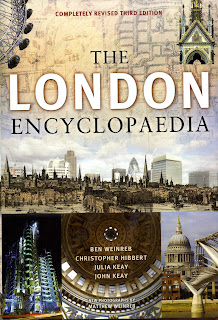 . I've been coveting it for ages and finally
decided that covetousness was not good for me so I had better give in to temptation.
It is both a reference book and a delicious box of chocolates for dipping into. There are lots of black and white illustrations and entries for streets, buildings, gardens, cemeteries, places and institutions that have long vanished, taverns, bridges, coronations, shops... the list goes on and on. The only problem is that it is so heavy it is impossible to walk around with - perhaps I could convert a wheeled walking frame with the addition of a lectern.

Finally there is a title that I can justify by saying it is relevant to the research for the next book I will be writing which has a renegade naval captain as the hero. There's no title yet, but I do know that it starts with a shipwreck on the Isles of Scilly and the heroine is the daughter of a wealthy nabob. (And the half-French hero is giving me palpitations already.) 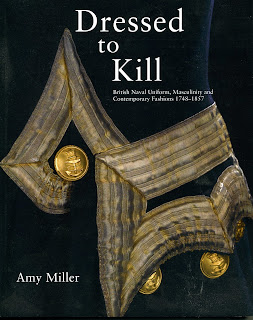 Dressed to Kill: British Naval Uniform, Masculinity and Contemporary Fashions 1748-1857 by Amy Miller is published by the National Maritime Museum.
It is beautifully illustrated in full colour with photographs of original uniforms, including minute details, line drawings to make the cut of garments clearer and contemporary portraits and cartoons.
If you want to know what a flag officer's waistcoat was like, see the inside detail of an epaulette, discover how uniforms developed from the fashionable dress of the day or simply to swoon over the portrait of Commander James Clark Ross, firm-jawed, draped in a bearskin and grasping his sword, this is the book for you.
Have a wonderful Christmas everyone!
Louise Allen
Posted by Historical Romance Author at 5:00 AM

I'm going to buy the Jane Austen book, and maybe the one about Bath - and if I sell something in the new year the London book -andas I'm going to have a navel captain as hero in my next novella - I'd better buy that one as well.
And I'd promised my dh I'd buy no more books as we hope to move next year.

*sigh* Must update my Christmas wishlist and hope for the best. ;) Thank you for these suggestions, I'll be sure to check them out!

Oooh, I do fancy a bit of naval costume at Christmas...

Oooh, Louise, you tempter! My Amazon wishlist has just got longer and it was already at 3 pages. What wonderful recommendations!

Thank you for sharing that with us, Louise. I think the first purchase will have to be another bookcase......

What I love about your choice of books, Louise, is that they are all very specific. What one needs when one writes historica novels is the nitty-gritty, not generalities - and your choice delivers just that.

Wish all your friends and families and everyone around a Merry Christmas by visiting http://www.closeupfreshbreath.in a new unique way of sharing your thoughts and expressing your feelings.