We're delighted to welcome Carol Townend to the blog. Over to you, Carol!


Thank you, I'm delighted to be here!
Years ago, I was asked to be custodian of a box of letters - some of them are very old. One is a copy of a family will - apparently the original was deposited at Halifax Parish Church in 1520! It would be wonderful to see the original.

Even after such a long passage of time, a glance at the copy shows that certain names are still popular with our family. The 1520 will is that of William Townend. William is my father’s name; it is also one of my brother’s names. The 1520 William was a yeoman farmer and he leaves his ‘best beast’ to the Vicar of Halifax. Several sums of money are bequeathed to various churches as well as for the building of a ‘stone bridge at Sourby’.

William leaves his son John, ‘all my clothes, plough and harrow with all their necessaries’.

And his daughter, Margaret? The will states: ‘Residue of all my goods, my debts paid, I give to my daughter Margaret, whom I ordain my true executrix.’

So William gives his son the means of carrying on his livelihood, and his daughter the household goods. I was struck by the fact that in 1520, Margaret was ordained executrix, which must surely be a reflection of William’s view of his daughter as a competent and efficient person. He knew he could rely on her to deal with his estate, such as it was.

Below is a scan of a letter dated three centuries later. It was written in the Barton Poor House on April 11th 1819. (Barton in Yorkshire) 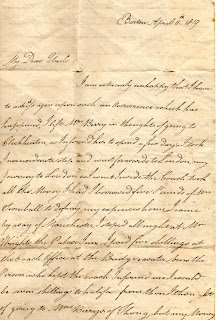 The letter is addressed to ‘My Dear Uncle’ and comes from his ‘Affectionate Neice (sic) Ellen’. It poses more questions than it answers. Here is a (rough) copy, I have tried to keep as closely as possible to Ellen’s original rather exenntrik spellygnes and punctuation:

I am extremely unhappy that I have to address you upon such an occurrence which has happened, I left Mrs Berry in thoughts of going to Cleckheaton, as Inform’d her to spend a few days I took inconsiderate step and went forwards to London, my journey to London as I went inside the Coach took all the Money I had I borrowed five pounds of Mrs Turnball to defray my expences home I came by way of Manchester, I stoped all night at Mr Wrights the Palace Inn. I paid five shillings at the Coach Office at the Bridge. water bins the Person who kept the Coach Informed me I would be seven shillings to Halifax from there I thought of going to Mrs Berry’s of Thong but my money being entirely finished I could not proceed any further so I thought to walk so far I am going to relate a very unpleasant circumstance to you I took a sudden and Inconsistent thought into my mind I walked as far as Barton a Village about five miles behind Manchester and went into the river with an Intention of drownding myself when I had been in the water some time I was very fortunately rescued from being drowned by a person who got me out of the river in safety I really believe that the hand of the Almighty who thought proper for me to be restored to life again…they took me to an Inn in the Village the Person who resided there being the Constable he said that I was to go to the Poorhouse in Barton, and they inform me I am to stop their while you come to acknowledge me your Neice, as I shall expect you as soon as you receive this letter my dear Uncle if ever you have any regard to me…

Since the letter was saved, Ellen’s uncle must have been fond of her and he must have gone to fetch her home from the poor house. I certainly like to think so. But this letter raises so many questions! The cool tone is extraordinary given the dramatic nature of the events Ellen describes. What drove her to set out on her ill-fated journey? And what happened to her afterwards?

Whatever the truth behind Ellen’s story, her letter could certainly inspire a novel or two…


Carol’s latest book: Runaway Lady, Conquering Lord is out in paperback with Mills & Boon in December. It is set in England and France shortly after the Norman Conquest, and tells the story of a fallen Saxon lady, and the Norman knight she is forced to appeal to for help.

Carol keeps trying to move on to the twelfth century, but the eleventh century seems to have her firmly in its grasp. She is currently working on a novel set in the Byzantine Empire.

Her website is currently being revamped, but she hopes it will be updated very soon! This is the link to Carol’s website
Posted by Historical Romance Author at 7:19 AM

A fascinating insight to a real historical life, Carol. Many women of those times must have suffered similar fates. It gives you the shivers just to think of it. And doesn't it get the inspiration fired up with plot ideas.
Good luck with the latest book. They are always on my reading list as I enjoy them so much.

What a wonderful resource, Carol,and very exciting. Nice to think of a father looking after his daughter, too (I think perhaps women in the 16th century were valued more than in later times). Also loved Ellen's letter - poor woman, I do hope her life ended more happily.

Hi Kate,
Yes, the very words 'Poor House' send shivers down my spine. And as you say, it certainly get the mind going on several plots!

Hello, Melinda!
I really like to think that Ellen was rescued. After all, that letter wouldn't have been kept if no-one cared about her...

Goodness me! Poor Ellen! I do hope her uncle fetched her out.

Hi Jan,
I have them all the time (inconsistent thoughts). Must run in the family ;)

What a fascinating letter, Carol, and it supports the impression I have that women traveled much more freely than we sometimes think. Freely in all senses.

So many possibilities. It's tempting to think that Ellen was mentally unstable, but then it's unlikely that her relatives would let her wander around so. Her actions are wild, and then a suicide attempt, but from the workhouse quite calm or even perky!

How frustrating that we'll never know.

Thanks for sharing it.

Hi Jo,
Yes, it is frustrating not to know more. I have often wondered what the full story was. Of course, I have also dreamed up a number of versions!