A Regency with a different setting 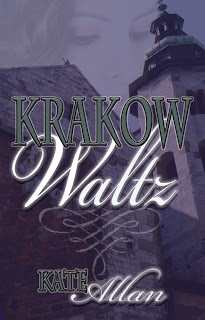 The final cover for Krakow Waltz, my "Polish Regency", to be published next year, has arrived (left). The photograph used for the background is really Krakow - it's a detail from a picture I took when visiting the city a few years ago.

Krakow is a place close to my heart. I have visited enough times to have lost count, and my mother mother's family still live there. My grandparents met there during the Second World War. A terrible time for many in the city, but their story has a touch of romance. It was winter, bitterly cold, and my grandmother came across my grandfather selling nylons out of a suitcase in the market and thought he looked chilled and under-nourished and so took him home to feed him up.

I was interested to discover that at the Vienna Peace Settlement in 1815, Krakow was designated a "free city". (The rest of Poland was divided between Russia, Prussia and the Austrian Empire.) Along with civic and cultural "improvements", such as tearing down the old medieval walls to make a circular park ("Planty") around the old city centre, it would have been rather a melting-pot where the cause of Polish nationalism lived on. The city was a mixture of narrow medieval streets and newer boulevards. Having walked the streets of Krakow Old Town it is easy to imagine them as a setting for intrigue. While the nobility largely adopted the (French) fashions of Europe, there remained pockets of "Polishness", and in Krakow Waltz, I left the city for a time, taking the characters into the countryside where there meet wolves and wild boar, and where the banquets are in "the old Polish style".

Krakow in the second decade of the nineteenth century seemed to me to be calling out to be the setting for a Regency adventure and romance and I'm very much hoping readers will enjoy the unusual setting.

www.kateallan.com
Posted by Kate Allan at 9:11 AM

Kate, what a wonderful setting for a book. Krakow is such a beautiful, atmospheric place, and with such an interesting history to draw on I am sure this will be a well-deserved success! I love books with unusual settings and will be looking out for this one.

Kate, what a touching family story and a terrific background for a plot that takes your readers to another world. I've added it to my wish list and am sure it will be a great success.

Gosh, Kate, this sounds interesting. Hope it does really well for you.