The Continuity Continues -with help from a clothesline 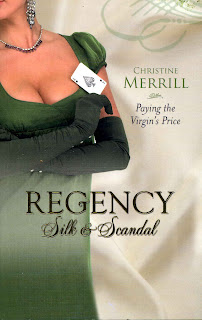 I am delighted to welcome Christine Merrill as a guest today. Christine is one of the Continuistas - the six authors who together have produced the eight books of Regency Silk & Scandal. Find out more about Christine at http://christine-merrill.com/

Last month I told you about the first in the series - my The Lord and the Wayward Lady. Christine's book, Paying the Virgin's Price, is this month's title and here is the gorgeous UK cover.
Christine, who writes one of the funniest blogs I have come across (http://doublecheese.livejournal.com/), shares this insight into her working methods. Over to you, Christine -
I was a bit daunted in trying to come up with a good topic for this blog. My research for Paying the Virgin’s Price was kind of a lost cause. I did plenty of it. But for many topics, I would just have to write “And then I asked Louise Allen…” Which is actually a really short post.
While I also read a lot about Regency gambling, I will admit to being a horrible card player. I cannot seem to grasp the strategy involved in modern games, much less historical ones, and will always be the one at the table who is forgetting the difference between tricks and trumps, and cannot seem to guess the contents of her partner’s hands based on cards played.
This general cluelessness kind of plays into what I can tell you about. Some people are natural card players, outline projects, file notes, and read spread sheets. They also have clean desks and good senses of direction. Some people, like me, do not. I cannot tell you whether I am naturally left or right brained since I sometimes have trouble telling left from right. I am also convinced that left and right have something to do with compass points. This has resulted in my saying things like “If you are coming from the North, turn East. But if you are coming from the South, turn West…” (and circumnavigate the globe, apparently). It is an endless source of amusement to my family, who are all males with natural compasses.
So when we sat down to layout the entire plot arc for Regency Silk and Scandal, it got pretty confusing for me, pretty quickly. Since I was still learning the names of the other authors, and the accompanying pseudonyms, remembering fictional people was kind of a stretch for my limited brain cells. And there were a lot of characters, on a twenty year time line. We had a back story cast of eight or so, most of whom were dead by the time the books started. And these people all had several children, and in some cases, a second spouse and an illicit affair. And friends. And servants. And wards. And some of those had died as well. And then a few strangers wandered in to fill out the eight heroes and heroines.
Talking about them was like going to the reunion of a large family, and sitting down after a couple of rounds of drinks to try to remember exactly how many children Aunt Mabel had, who they had married, and which one of them got stung by the bee? (or in the case of our stories, married a Gypsy…)
Actually, it was like being a spouse at the reunion, and having knowledge of these people without having actually met any of them. Not only were these people imaginary, they could be the product of someone else’s imagination: literary second cousins, once removed from our own characters.
There were outlines and spreadsheets, family trees and a compendium of e-mail notes in the Files section of a Yahoo group. All the information was there, plain before me. And yet, I was still pretty fuzzy. Someone told me that the chronically left or right brained people have a different sort of organizational style, which is why they tend to leave things in piles on the desk, instead of neat folders. It looks like a mess, but really it isn’t. They want to see everything, at all times, to know it’s still there. Once it is filed, it is forgotten.This is definitely me. And I looked it up. I am right brain dominant. Creative. But spacey.
So I created my version of a multi-dimensional spreadsheet by cutting apart some of our existing organizational documents, and taping them to a white board, adding colored pins and strings to show relationships. Hey presto! It all became clear to me. The families were an interconnected organism, and the relationships balanced neatly once I could see them all at once. At the point I made the board in the attached picture, we were still coming up with names for some of the principals. A left brained person would have filled those in. But I stopped, the minute I had gotten what I needed from it. The goal was to create a working document that would keep me on track, not an archival history of the whole project. 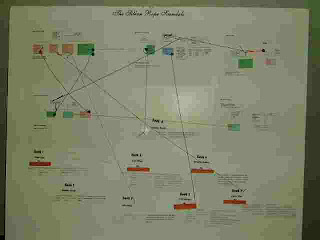 I cannot show you the desk filing, research system, since I took it down. But imagine a seven foot long, bright orange clothesline, tied between two book cases, and hanging about 10 inches above the computer monitor. Now imagine a lot of printer paper attached to it by binder clips. At any given time, I had pictures of heroes, heroines, Gypsy camps, Rom vocabularies, Newgate and the Official Table of Drops for hangings (not in use for the Regency, but nice to know), floating just above my head, where I could find them on days when I remembered to look up.
If you try something similar, you will find that it clears up a lot of desk space for empty soda cans, breakfast dishes and cats. It will also prove to your family that you are hard at work, and seriously organized, and not just sitting at a messy desk and playing computer solitaire all day, as they might secretly suspect.
Thank you, Christine! I for one, am going straight out to buy a clothes line. Does it have to be orange?
Louise Allen
Posted by Historical Romance Author at 5:00 AM

I feel a lot better after reading about the clothes line - at the time of writing my part of the series, I was using a lap top on my sofa in the front room. The sofa cusions formed an vital part of my filing system, by keeping characters and plots in their relevant spaces. (book 2? Behind the green cushion. bk 3? tucked down the left arm.) And papers gradually oozed aross the living room floor, too!

riI have to be careful about leaving anything important on low furniture. If I do, the dog eats it.

Or at least takes it, and runs round and round the house, forcing me to play tag.

Chris, your filing system has me seriously interested. Like Annie, I now mostly write on my laptop sitting on the sofa. The surface of my desk (which is small in any event) is normally covered with an assortment of anything from books to bookmarks to bills to magazines. But I do have bookcases and if I could get some orange clothesline (I actually do have some clothespins) maybe I could be in business!