When is a Regency not a Regency? 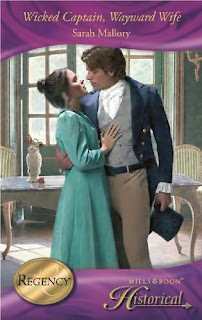 I must be feeling a little bored today, because I fear this may open a can of worms, but I am going to post it anyway!

My author copies of the large print edition of Wicked Captain, Wayward Wife arrived recently, prior to its publication in August, and looking at the cover gave me pause.

As a writer of historical romantic fiction, I pride myself on getting my history right, yet here I am with a book set in 1783, and the cover boldly carries the banner "Regency". I know that those who argue for total historical accuracy will be appalled, and to them I apologise, but this is business and one has to be pragmatic. (The illustration is not entirely accurate either, but one thing at a time).

George became Regent in 1811 and King in 1820 so technically, the Regency lasted only nine years, but readers will be aware that there are plenty of "Regency" romances that cover a much wider time-scale. The term Regency has become something of a brand, and when readers pick up a Regency Romance they know that what they will find between the covers is a story that is set somewhere between 1750 and the 1830's.

There is an argument for allowing the term "Regency" to span the period from 1795 until 1837 because this was a transition period between the Georgian and Victorian eras. Or perhaps we could stick with the term "Georgian" to cover the whole period, but then what do we do about poor William who came to the throne in 1830? So we could call it the Hanoverian period, but the differences in culture between the early eighteenth and early nineteenth centuries are vast.

Maybe the period should be called The Long Regency, the way historians refer to the Long Eighteenth Century, which can run from the Glorious Revolution of 1688 until the Battle of Waterloo.

My head hurts just thinking about all the possibilities.

Does it matter? I am undecided. Part of me would like to be accurate, but this is the entertainment business and as long as the public does not feel it is being misled, should I care?

What do you think? (But please, be nice - no blood-letting!)

Sarah Mallory/Melinda Hammond
Posted by Historical Romance Author at 12:36 AM

I've always considered anything that mentions the fight against Napoleon as 'topical'--its Regency.

But I am also one of those who considers any romance set before 1960 (when my dad was born) as 'historical', though my friend takes it further and says anything set before when she was born (1980) is 'historical' because its not part of her contemporary timeline.

Interesting, Lexie. Perhaps we should call our books "Napoleons" - doesn't have the same ring, though, does it?

I tend to think of "historical" as anything before 1945 but my personal favourite era is Georgian with all its colour and vibrancy.

heh it takes the romance world by storm--the new, fresh-faced 'Napoleonic Romances'...yeah it really doesn't have the same ring to it (I suppose unlike 'Tudor era romances', 'Napoleonic' is not really used as a phrase for that time in history).

I like Victorian era--after 1850 more or less--the best, though when I was younger it was all straight Regency nothing else ever for me.

Great post, Melinda. One of my novels, Harstairs House, which was set in 1793, features a woman in a high-waisted dress on the cover. It's inaccurate for the period but otherwise I adore the cover - you can see it here http://www.amandagrange.com/hh.html

But as far as historical romance is concerned I think Regency is about a tone and style of book rather than a year. I think publishers use such a wide range of dates because they think the books will appeal to the same readers. It's rather like book shops and libraries saying 'If you like this, then you'll also like . . . ' or at least that's how I look at it.

I agree with you, Melinda. In my experience, publisher-speak 'Regency' seems to be anything between about 1770 and 1840. On the large print cover of my 1817 novel 'The Hartfield Inheritance' the heroine wears a crinoline - something not invented for another forty-odd years!

There's no point in being outraged - and I have been, frequently. I've come to the conclusion that neither the publicity machine nor those who design the book covers care two hoots about such niceties as historical accuracy.

Thanks for your comments,Amanda and Elizabeth. I think we have to be pragmatic about it, and if the term helps readers to identify a style of book that they enjoy then it is what we want!

I agree with Amanda. "Regency" deals with a tone and style of book rather than a year. In Spanish we talk about some specific characteristics that a novel should have to be called "Regency". Even more, what is the difference betwen a novel set in 1840 (in appereance Regency) and a novel set in 1842 (in appereance not Regency)? I think it is not retaled to years, but to style.
(Sorry for my English, this is not my native language... :o)

Mary, please don't apologise for your English, you made your point perfectly!

I enjoy writing historical romantic adventures as Sarah Mallory, and if the publishers think it helps to call them Regencies, then I am not going to complain!

A shrug of the shoulders is probably the best response. The term "Regency" as a descriptive is much like the term "historical" in "historical romance." It has little to do with history or historicity--only setting. Still, 1783? Send the labeller back to school!

It's a complicated issue, and some will be horrified and others not care a button. It's all about marketing, isn't it? Which effectively means, with a large publishing corporation like HMB, that it's out of your hands - as well as out of your editor's.

Re what is historical, I incline towards the anything older than a decade or two is 'history' theory. Logically, yesterday is history too, but of course we all remember yesterday pretty clearly - assuming we were sober - but perhaps the specific details of ten or twenty years ago is starting to slip, ever so slightly, into a general haze.

I believe anything pre-1920 is frowned upon by historical romance editors at the moment. Could be wrong, but that's what I recall, with c. 1945 being the absolute latest you can go for it to be 'historical'. And those wartime stories tend not to be straight romances, but romantic fiction or sagas.

Frankly, I can't see any reason for that particular embargo to continue. We're in 2010 now. Soon it will be a full century since WW1 began, and that feels like it qualifies as history to me!

Thank you all for your comments. It is a complicated business, isn't it, and the argument can run and run.

For those of us of a certain age, it's difficult to think of the 20th century as history!

My own manuscript is set in 1805 prior to the Battle at Trafalgar. It is not technically Regency.

I think that we've stretched the time period based on fashion rather that history.

For what it's worth, I believe the transition period of 1795 to 1837 should be considered the "general Regency period", with 1811 to 1820 being the "technical Regency". I think it should be consistent this way, and that anyone calling a book Regency should have that book take place within the general Regency period. Otherwise, why bother to label any period, if boundaries can be stretched to suit the publisher or editor?