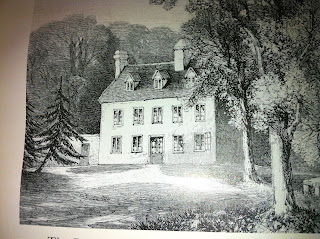 I was very excited to read about some of the discoveries made during the dig at Jane Austen's childhood home in the village of Steventon, Hampshire, which took place in November 2011. The rectory was pulled down in the 1820s and what is known of its appearance is only recorded on old maps and drawings or writings made from the memories of Austen descendants. It seems that the actual foundations of the rectory have now been located as a result of the dig - formerly, the only clue to its situation was the presence of an iron pump.

Jane was born in Steventon Rectory and lived happily for the first twenty five years of her life until her father decided to retire and move the family to Bath. It was here that she drafted her first three novels, Sense and Sensibility, Pride and Prejudice and Northanger Abbey, all between the ages of 19 and 23.

Anna Lefroy, niece of Jane, wrote about her memories of the house:
"The dining room or common sitting-room looked to the front and was lighted by two casement windows. On the same side the front door opened into a smaller parlour, and visitors, who were few and rare, were not a bit less welcome to my grandmother because they found her sitting there busily engaged with her needle, making and mending. 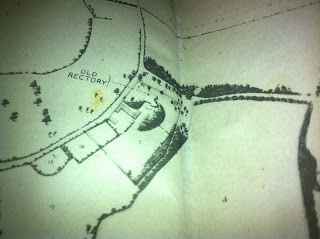 In later times ... a sitting room was made upstairs: 'the dressing room', as they were pleased to call it, perhaps because it opened into a smaller chamber in which my two aunts slept. I remember the common looking carpet with its chocolate ground, and painted press with shelves above for books, and Jane's piano, and an oval looking-glass that hung between the windows; but the charm of the room with its scanty furniture and cheaply painted walls must have been, for those old enough to understand it, the flow of native wit with all the fun and nonsense of a large and clever family."
In Nigel Nicolson's book, The World of Jane Austen, he notes that there were two parlours and a kitchen, a private study for the vicar and ten bedrooms above, three of them in the attics.
It seems quite a large house, but the Austen's had six boys plus the two girls and Mr Austen tutored boys who also came to live with them. The Austen boys were not always at home as they were sent away to study and even Jane and Cassandra went to school for a short while, but even so, along with servants, it must have seemed a busy household.

Apparently, they excavated thousands of metal, glass and ceramic objects during the dig, and I was 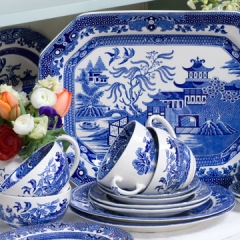 interested to see from the photographs on the website that there were pieces of Willow pattern china discovered amongst the findings. Blue Willow was a very popular pattern during the eighteenth century. The pattern was inspired by the designs imported from China and were produced from the 1780s and 90s by Thomas Minton and Thomas Turner of Caughley. It was produced by transfer printing - the design was printed onto a sheet of thin tissue paper and then applied to earthenware or porcelain - a technique in use from 1750 in Birmingham. Spode, Royal Worcester, Adams, Wedgwood, Davenport, Clews, Leeds and Swansea followed.
Burleigh is one of the only companies left producing transferware in the traditional method - a favourite website of mine. Another favourite is Lovers of Blue and White where you can find examples of old and new blue and white transfer ware. And there are always bargains to be had for Willow pattern on ebay! 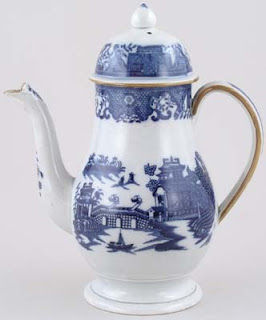 We know from a letter that Jane wrote on the 6th June 1811 that the family also owned some Wedgwood - "On Monday I had the pleasure of receiving, unpacking and approving our Wedgwood ware. It all came very safely and upon the whole is a good match, tho’ I think they might have  allowed us rather larger leaves, especially in such a year of fine foliage as this…" Her brother Edward, who was adopted by wealthy relatives, owned a set of very fine Wedgwood china. On 16th September, 1813, Jane Austen wrote a letter to her sister Cassandra, in which she noted a visit with her brother and a niece to Wedgwood’s in London: “We then went to Wedgwoods where my brother and Fanny chose a Dinner Set, I believe the pattern is a small Lozenge in purple, between Lines of narrow Gold; - and it is to have the Crest.”
There is a fascinating programme on at present about Josiah Wedgwood on BBC iplayer.

Finally, there is to be a book by Deborah Charlton about the findings of the dig, and you can watch a short film about it here. I must say I've found it all a great inspiration for my own writing - my next novel is inspired by Pride and Prejudice and the Steventon dig provides the setting for some time travel, and, of course, some hidden secrets!


Posted by Historical Romance Author at 12:00 AM

I really enjoyed your post, Jane - archeology and Georgian living, my two favourite subjects! Thank you.

I'm so glad you enjoyed it Melinda. If you haven't seen the programme about Josiah Wedgwood, I'm sure you'd enjoy that too!

I did enjoy this, Jane. I didn't know about the Steventon dig - how fascinating.

I saw the Josiah Wedgwood programme which I found very interesting. I bought ten beautiful Wedgwood dinner plates in a junk shop many years ago. They have a green leaves pattern and a gold rim. I only use them at Christmas - though perhaps that is just silly. Really, they need to be used and enjoyed all the time.

I love collecting old china, Elizabeth, but I haven't got any Wedgwood-I must admit, the programme really made me want some! My other favourite is Spode-there are so many beautiful designs.
I think that's a lovely idea to use them at Christmas-especially as they can't really be used on a daily basis without it showing or stand being washed in a dishwasher!

I so enjoyed your post, Jane, and a glimpse into the lives of the Austen family.