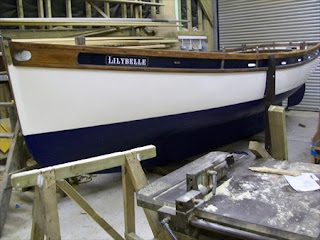 On Friday I went to a local boatyard to talk to Sam Heard who owns and runs it.  When I was researching background about boatbuilding for Eye of the Wind I was this yard I visited.


Sam is the third generation of his family to build boats here on Mylor Creek, just off the Carrick Roads, the world's third largest natural harbour. The yard was started by his grandfather who built traditional working boats. The Truro oyster fishery is the last in the world to dredge for oysters entirely under sail, and from 1st October to 31st March the fleet is out in all but life-threatening weather.  Seeing a gap in the market Terry designed a smaller working boat along similar lines. Called a Tosher it was an immediate success and fifty years on though many are used from leisure rather than work a steady stream of orders keeps the yard busy. 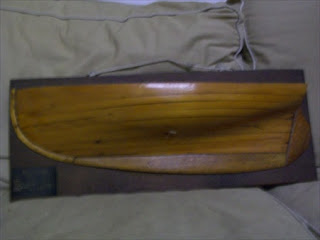 I've known the yard since I was a child, and watched it evolve. Old wooden hulks that acted as a breakwater and protected moored boats from westerly gales have been replaced by a neat granite wall. Boats laid-up for the winter or brought in for renovation or repair are now as likely to be GRP (fibreglass) as wood. Yet sitting in Sam's office surrounded by half-models, sail plans, working drawings, ledgers and a wall of framed pictures - his grandfather's watercolours of boats he'd built - I could have been in an early C19th boatyard office – apart from the computer.


I had asked Sam to spare me half an hour. But as we started talking about his grandfather, the yard, childhood memories, family connections and local politics, time flew. After a fascinating and enjoyable ninety minutes I dragged myself away. As I walked home I thought yet again how lucky I am to live in a place where people can trace their families back several generations. The stories they tell bring the past to vivid life.


As featured Author of the Month  Accent Press is offering a 25% discount on this and all my ebook titles.

All great background for your books, Jane. Thanks for posting this

I feel privileged to have access to so much living history, Melinda. So much potential background for books, not enough time to write them all!

A very interesting post, Jane. I loved the sound of Sam's office, very similar to what his grandfather's workplace muct have been like. There's nothing like seeing it for yourself. I'm sure it smells exactly as it should - a touch tarry, perhaps?

It would have been 'tarry' 50 years ago, Elizabeth, now it smells of resin and fibreglass. But the yard outside smells exactly as it would have in the C18 and C19th: seaweed, the coconutty scent of old rope, mud, and freshly-sawn wood - even on GRP boats the gunwales, deckboards, transom etc are still made of wood - and varnish. It's incredibly evocative. Who needs a Tardis when one deep breath takes you back to a different age?!