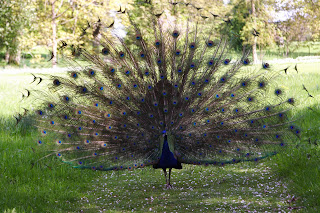 Peacocks have been in the news this week. Firstly there was the mischievous peacock causing mayhem in a Derbyshire village, then we heard about Henry the peacock who was so tired of being the only male in a flock of peahens (exhausting work!) that he flew away for some rest.

The peacock is a familiar sight at many of our stately homes in the UK. The one at the top was displaying for us at Corsham Court in Wiltshire. The peacock is a native bird to India and was probably introduced into Britain by the Romans. It has many sacred connotations. The name derives from the Old English. The earliest example of it referred to in writing comes from 1300: “Foure and xxti wild ges and a poucock.” In the 14th century Chaucer first used the word to describe ostentatious people who strutted about and it still carries this meaning to this day. In art a peacock feather in a painting was used as a symbol of pride and vanity.

I’ve been trying to discover how peacocks first became associated with stately homes. Perhaps it was their 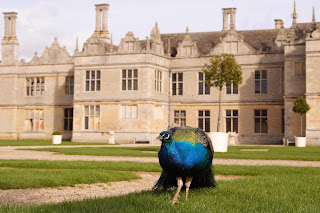 designer plumage that the lord of the manor first identified with. Or perhaps it was simply that they were popular to eat at medieval banquets and a peacock on a table was a sign of wealth.

The other notable thing about peacocks is their call, a mournful cry you often hear echoing around the gardens at mansions or haunting the ruins of castles. When we went to Kirby Hall in Northamptonshire earlier this year the cry of the peacocks as they perched on the walls seemed perfect to the setting of a half-ruined Elizabethan mansion. Above is a picture of the bad-tempered Kirby peacock which would try to bite you if you got too close!
Posted by Nicola Cornick at 9:24 AM

That call is unearthly! I once stayed in a beautiful country hotel where my slumbers were disturbed at an appallingly early hour by it. I would never stay again in an hotel boasting of peacocks...

Haha! How funny, Helena. Most people would think it would enhance the ambiance of a place to have peacocks but I must admit I hadn't thought of the unearthly wailings at dawn!

On a trip to London in the 80s, peacocks had just been returned to Holland Park after a naughty fox required removal to safety.

It seems that, when the force is with them, peacocks can wander afar and be sufficiently testy that police issue warnings of the peacocks' aggressiveness and failure to observe traffic laws. LOL.

LOL, Liz! I did read about an amorous peacock that attacked a car. Seems they are a law unto themselves!

I'm with Helena on this - I really dislike the peacock's harsh cry. And I'd certainly not want it in the early hours.

I prefer the nice quiet stuffed one in the hall at Leighton House, Kensington, home of Lord Leighton, President of the Royal Academy in the late 19th century.

LOL, Elizabeth! That one is definitely not going to cause any trouble!